Lactose intolerance is the inability to digest lactose, a sugar found in milk, due to a lack of the enzyme lactase.

Those who are lactose intolerant can be more tolerant of traditionally made yogurt than of milk because it contains lactase produced by the bacterial cultures used to make the yogurt. Frozen yogurt, if cultured similarly to its unfrozen counterpart, will contain similarly reduced lactose levels. However, many commercial brands contain milk solids, increasing the lactose content.

Lactose intolerance, also called lactase deficiency and hypolactasia, is the inability to digest lactose, a sugar found in milk and, to a lesser extent, in milk-derived dairy products. Lactose intolerant individuals have insufficient levels of lactase, the enzyme that metabolizes lactose into glucose and galactose, in their digestive system. In most cases, this causes symptoms such as abdominal bloating and cramps, flatulence, diarrhea, nausea, borborygmi (rumbling stomach), and/or vomiting after consuming significant amounts of lactose. Some studies in the U.S. and elsewhere suggest that milk consumption by lactose intolerant individuals may be a significant cause of irritable bowel syndrome. 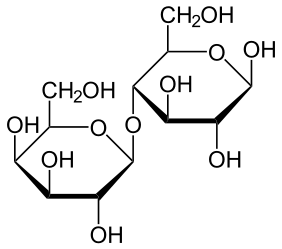 Lactose: Lactose, a disaccharide of β-D-galactose and β-D-glucose, is normally broken down by the enzyme lactase into its component monosaccharides. Individuals who suffer from lactose intolerance have insufficient levels of lactase to break down the lactose in milk and dairy products.

Most mammals normally become lactose intolerant after weaning, but some human populations have developed lactase persistence, in which lactase production continues into adulthood. It is estimated that 75% of adults worldwide show some decrease in lactase activity during adulthood. The frequency of decreased lactase activity ranges from 5% in northern Europe through 71% for Sicily to more than 90% in some African and Asian countries. This distribution is now thought to have been caused by recent natural selection favoring lactase persistent individuals in cultures that rely on dairy products. While it was first thought that this would mean that populations in Europe, India, and Africa that had high frequencies of lactase persistence shared a single mutation, it has now been shown that lactase persistence is caused by several independently occurring mutations.

While dairy products can be a significant source of nutrients in some societies, there is no evidence that lactose intolerance has any adverse impact on nutrition where consumption is the norm among adults. Congenital lactase deficiency (CLD), where the production of lactase is inhibited from birth, can be dangerous in any society because of infants’ nutritional reliance on breast milk during their first months. Before the 20th century, babies born with CLD were not expected to survive, but these death rates can now be lowered using soybean-derived infant formulas and manufactured lactose-free dairy products. Beyond infancy, individuals affected by CLD usually have the same nutritional concerns as any lactose-intolerant adult.

Lactose cannot be directly absorbed through the wall of the small intestine into the bloodstream so, in the absence of lactase, it passes intact into the colon. Bacteria in the colon are able to metabolize lactose and the resulting fermentation produces copious amounts of gas (a mixture of hydrogen, carbon dioxide, and methane) that causes the various abdominal symptoms. The unabsorbed sugars and fermentation products also raise the osmotic pressure of the colon, resulting in an increased flow of water into the bowels (diarrhea).

Assessment and Treatment of Lactose Intolerance

To assess lactose intolerance, intestinal function is challenged by ingesting more dairy products than can be readily digested. Clinical symptoms typically appear within 30 minutes, but may take up to two hours, depending on other foods and activities. Substantial variability in response (symptoms of nausea, cramping, bloating, diarrhea, and flatulence) is to be expected, as the extent and severity of lactose intolerance varies among individuals.

It is important to distinguish lactose intolerance from milk allergy, an abnormal immune response (usually) to milk proteins. This may be done in diagnosis by giving lactose-free milk, producing no symptoms in the case of lactose intolerance, but the same reaction as to normal milk if it is a milk allergy. An intermediate result might suggest that the person has both conditions. Since lactose intolerance is the normal state for most adults worldwide, it is not considered a disease and a medical diagnosis is not normally required, although tests are available if confirmation is necessary.

Lactose intolerance is not considered a condition that requires treatment in societies where the diet contains relatively little dairy. However, those living among societies that are largely lactose-tolerant may find lactose intolerance troublesome. Although there are still no methodologies to reinstate lactase production, some individuals have reported that their intolerance varies over time, depending on health status and pregnancy. About 44% of lactose intolerant women regain the ability to digest lactose during pregnancy. This might be caused by slow intestinal transit and intestinal flora changes during pregnancy.