Acidosis is an increased acidity in the blood and other body tissue (i.e., an increased hydrogen ion concentration). If not further qualified, it usually refers to acidity of the blood plasma. Acidosis is said to occur when arterial pH falls below 7.35, while its counterpart (alkalosis) occurs at a pH over 7.45. Arterial blood gas analysis and other tests are required to determine the main causes.

The term “acidemia” describes the state of low blood pH, while acidosis is used to describe the processes leading to these states. Nevertheless, the terms are sometimes used interchangeably. The distinction may be relevant where a patient has factors causing both acidosis and alkalosis, wherein the relative severity of both determines whether the result is a high or a low pH.

The rate of cellular metabolic activity affects and, at the same time, is affected by the pH of the body fluids. In humans, the normal pH of arterial blood lies between 7.35 and 7.45. Blood pH values compatible with life in all mammals are limited to a pH range between 6.8 and 7.8. Changes in the pH of arterial blood (and therefore the extracellular fluid) outside this range result in irreversible cell damage.

Metabolic acidosis may result from increased production of metabolic acids or disturbances in the ability to excrete acid via the kidneys. Renal acidosis is associated with an accumulation of urea and creatinine as well as metabolic acid residues of protein catabolism.

A rise in lactate out of proportion to the level of pyruvate is termed “excess lactate,” and may be an indicator of fermentation due to anaerobic metabolism occurring in muscle cells, as seen during strenuous exercise. Once oxygenation is restored, the acidosis clears quickly. Another example of increased production of acids occurs in starvation and diabetic acidosis. It is due to the accumulation of ketoacids (ketosis) and reflects a severe shift from glycolysis to lipolysis for energy needs.

Metabolic acidosis is compensated for in the lungs, as increased exhalation of carbon dioxide promptly shifts the buffering equation to reduce metabolic acid. This is a result of stimulation to chemoreceptors, which increases alveolar ventilation, leading to respiratory compensation, otherwise known as Kussmaul breathing (a specific type of hyperventilation). Should this situation persist, the patient is at risk for exhaustion leading to respiratory failure.

The Henderson-Hasselbalch approximation is useful for calculating blood pH, because blood is a buffer solution. The amount of metabolic acid accumulating can also be quantitated by using buffer base deviation, a derivative estimate of the metabolic as opposed to the respiratory component. In hypovolemic shock for example, approximately 50% of the metabolic acid accumulation is lactic acid, which disappears as blood flow and oxygen debt are corrected.

Respiratory acidosis results from a build-up of CO2 in the blood (hypercapnia) due to hypoventilation. It is most often caused by pulmonary problems, although head injuries, drugs (especially anesthetics and sedatives), and brain tumors can cause this acidemia. Pneumothorax, emphysema, chronic bronchitis, asthma, severe pneumonia, and aspiration are among the most frequent causes. It can also occur as a compensatory response to chronic metabolic alkalosis.

However, in cases where chronic illnesses that compromise pulmonary function persist, such as late-stage emphysema and certain types of muscular dystrophy, compensatory mechanisms will be unable to reverse this acidotic condition. As metabolic bicarbonate production becomes exhausted, and extraneous bicarbonate infusion can no longer reverse the extreme buildup of carbon dioxide associated with uncompensated respiratory acidosis, mechanical ventilation will usually be applied. 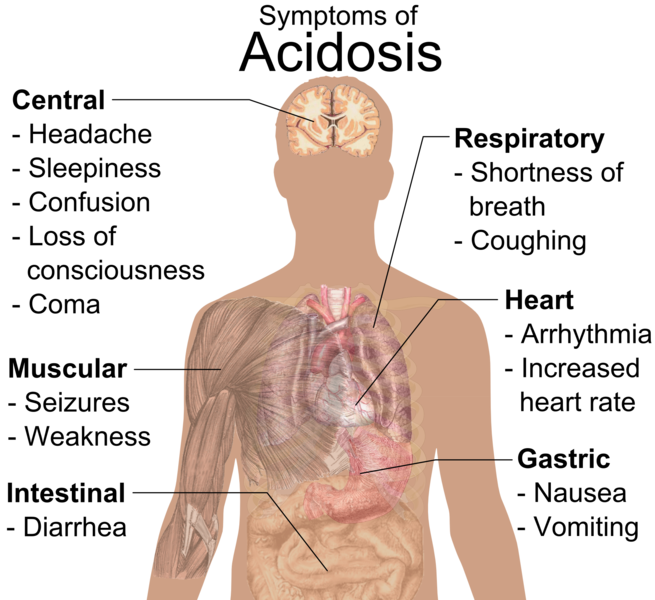 Symptoms of Acidosis: General symptoms of acidosis are described in relation to their location on the body. These symptoms usually accompany symptoms of another primary defect (respiratory or metabolic).