Hypoxia, or hypoxiation, is inadequate oxygen supply to the body as a whole (generalized hypoxia) or a region of the body (tissue hypoxia).

Hypoxia, or hypoxiation, is a pathological condition in which the body as a whole (generalized hypoxia) or a region of the body (tissue hypoxia) is deprived of adequate oxygen supply. Variations in arterial oxygen concentrations can be part of the normal physiology, for example, during strenuous physical exercise. A mismatch between oxygen supply and its demand at the cellular level may result in a hypoxic condition. Hypoxia in which there is complete deprivation of oxygen supply is referred to as anoxia.

Hypoxia differs from hypoxemia in that in the latter the oxygen concentration within the arterial blood is abnormally low. It is possible to experience hypoxia and have a low oxygen content (e.g., due to anemia) but maintain high oxygen partial pressure (pO2). Incorrect use of these terms can easily lead to confusion, especially as hypoxemia is among the causes of hypoxia (in hypoxemic hypoxia). Generalized hypoxia occurs in healthy people when they ascend to high altitude where it causes altitude sickness leading to potentially fatal complications: high altitude pulmonary edema (HAPE) and high altitude cerebral edema (HACE). Hypoxia also occurs in healthy individuals when breathing mixtures of gases with a low oxygen content, e.g., while diving underwater especially when using closed-circuit rebreather systems that control the amount of oxygen in the supplied air. A mild and non-damaging intermittent hypoxia is used intentionally during altitude trainings to develop an athletic performance adaptation at both the systemic and cellular level.

Hypoxia is also a serious consequence of preterm birth in the neonate. The main cause for this is that the lungs of the human fetus are among the last organs to develop during pregnancy. To assist the lungs to distribute oxygenated blood throughout the body, infants at risk of hypoxia are often placed inside an incubator capable of providing continuous positive airway pressure (also known as a humidicrib). In humans, hypoxia is detected by chemoreceptors in the carotid body. This response does not control ventilation rate at normal pO2, but below normal the activity of neurons innervating these receptors increases dramatically, so much so to override the signals from central chemoreceptors in the hypothalamus, increasing pO2 despite a falling pCO2. 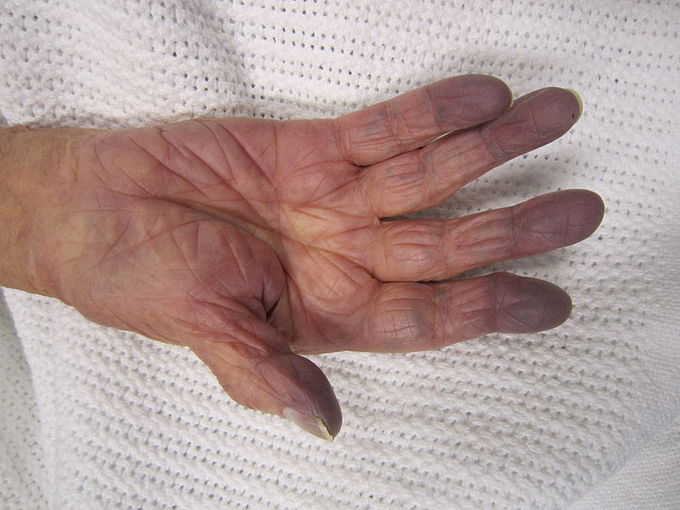 Cyanosis during hypoxia: Cyanosis in the hand of patient suffering from hypoxia.

The symptoms of generalized hypoxia depend on its severity and acceleration of onset. In the case of altitude sickness, where hypoxia develops gradually, the symptoms include headaches, fatigue, shortness of breath, a feeling of euphoria, and nausea. In severe hypoxia, or hypoxia of very rapid onset, changes in levels of consciousness, seizures, coma, priapism, and death occur. Severe hypoxia induces a blue discoloration of the skin, called cyanosis. Because hemoglobin is a darker red when it is not bound to oxygen (deoxyhemoglobin), as opposed to the rich red color that it has when bound to oxygen (oxyhemoglobin), when seen through the skin it has an increased tendency to reflect blue light back to the eye. In cases where the oxygen is displaced by another molecule, such as carbon monoxide, the skin may appear “cherry red” instead of cyanotic.

In most tissues of the body, the response to hypoxia is vasodilation. By widening the blood vessels, the tissue allows greater perfusion. By contrast, in the lungs, the response to hypoxia is vasoconstriction. This is known as “Hypoxic pulmonary vasoconstriction” or “HPV.” To counter the effects of high-altitude diseases, the body must return arterial pO2 toward normal. Acclimatization, the means by which the body adapts to higher altitudes, only partially restores pO2 to standard levels. Hyperventilation, the body’s most common response to high-altitude conditions, increases alveolar pO2 by raising the depth and rate of breathing.

However, while pO2 does improve with hyperventilation, it does not return to normal. Studies of miners and astronomers working at 3,000 meters and above show improved alveolar pO2 with full acclimatization, yet the pO2 level remains equal to or even below the threshold for continuous oxygen therapy for patients with chronic obstructive pulmonary disease (COPD). In addition, there are complications involved with acclimatization. Polycythemia, in which the body increases the number of red blood cells in circulation, thickens the blood, raising the danger that the heart can’t pump it.