Bones adapt to the muscle force loads placed on them, becoming thicker and stronger under stress and use and weaker and thinner when unused.

Although we often think of the elderly as feeble and weak, regular exercise can fight osteoporosis and maintain strength and flexibility. This is demonstrated by Johanna Quaas, an 86-year-old gymnast who can still perform an amazing routine on the parallel bars. 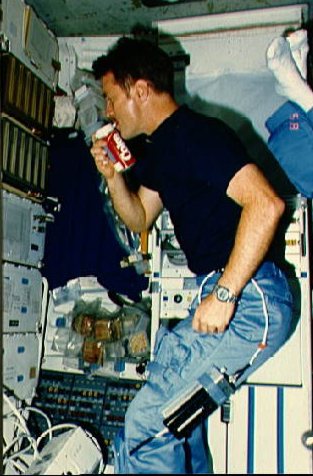 NASA Shuttle Astronaut: Astronauts who spend a long time in space will often return to earth with weaker bones, since gravity hasn’t been exerting a load. Their bodies have reabsorbed much of the mineral that was previously in their bones.

According to Wolff’s law, bone in a healthy person or animal will adapt to the load under which it is placed. If loading on a particular bone increases, the bone will remodel itself to provide the strength needed for resistance. The internal architecture of the trabeculae undergoes adaptive changes, followed by secondary changes to the external cortical portion of the bone, perhaps becoming thicker as a result. The opposite is true as well. If the load on a bone decreases, the bone will become weaker due to turnover. It is less metabolically costly to maintain and there is no stimulus for continued remodeling required to maintain bone mass.

Muscle force is a strong determinant of bone structure, particularly during growth and development. The gender divergence in the bone-muscle relationship becomes strongly evident during adolescence. In females, growth is characterized by increased estrogen levels and increased mass and strength of bone relative to that of muscle. In men, increases in testosterone fuel large increases in muscle, resulting in muscle force that coincides with substantial growth in bone dimensions and strength.

In adulthood, significant age-related losses are observed for both bone and muscle tissues. A large decrease in estrogen levels in women appears to diminish the skeleton’s responsiveness to exercise more than in men. In contrast, the aging of the muscle-bone axis in men is a function of age-related declines in both hormones. In addition to the well-known age-related changes in the mechanical loading of bone by muscle, newer studies appear to provide evidence of age and gender-related variations in molecular signaling between bone and muscle that are independent of purely mechanical interactions. In summary, gender differences in acquisition and age-related loss in bone and muscle tissues may be important for developing gender-specific strategies for ways to reduce bone loss with exercise. 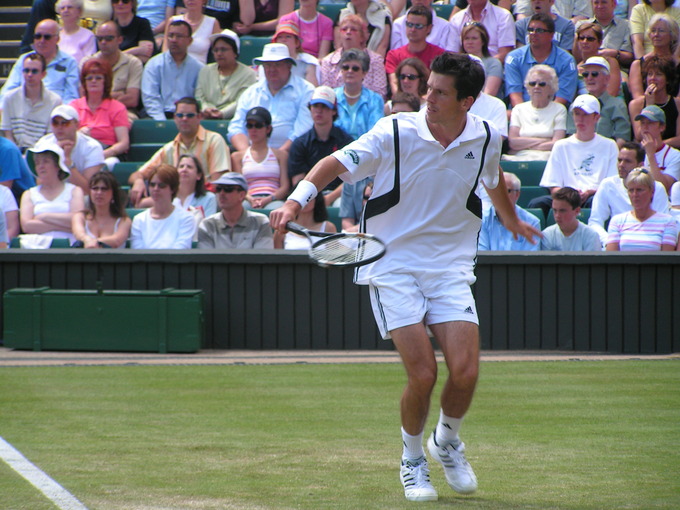 Tim Henman performs a backhand volley at the Wimbledon tournament in 2004.: The racquet-holding arm bones of tennis players become much stronger than those of the other arm. Their bodies have strengthened the bones in their racquet-holding arm since they are routinely placed under higher than normal stress.

Simple aerobic exercises like walking, jogging, and running could provide an important role in maintaining and/or increasing bone density in women. Walking is an inexpensive, practical exercise associated with low injury rates and high acceptability among the elderly. For these reasons, walking could be an appropriate approach to prevent osteoporosis and maintain bone mass.