Myogenesis is the formation of muscle tissue during embryonic development from stem cells in the mesoderm.

Embryogenesis is the process by which the embryo is formed and develops, until it becomes a fetus. 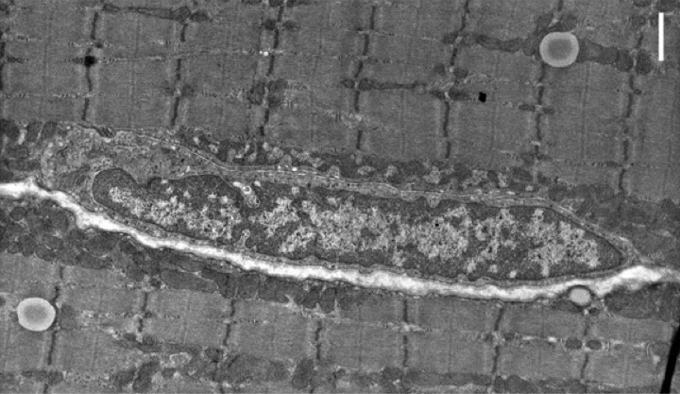 Skeletal Satellite Muscle Cell: Satellite cells are located between the basement membrane and sarcolemma (cell membrane) of individual muscle fibers. They are able to differentiate and fuse to augment existing muscle fibers and to form new ones. These cells represent the oldest known adult stem cell niche, and are involved in the normal growth of muscle, as well as regeneration following injury or disease.

The cells of the inner cell mass (embryoblast), known as human embryonic stem cells (hESCs), differentiate to form four structures: the amnion, the yolk sac, the allantois, and the embryo itself. Human embryonic stem cells are pluripotent; that is, they can differentiate into any of the cell types present in the adult human, and into any of the intermediate progenitor cell types that eventually turn into the adult cell lines. hESCs are also immortal; they can divide and grow in number indefinitely, without undergoing either differentiation or cellular aging (cellular senescence).

The first differentiation of the hESCs that form the embryo proper, is in three cell types known as the germ layers: the ectoderm, the mesoderm, and the endoderm. The ectoderm eventually forms the skin (including hair and nails), mucous membranes, and nervous system. The mesoderm forms the skeleton and muscles, heart and circulatory system, urinary and reproductive systems, and connective tissues inside the body. The endoderm forms the gastrointestinal tract (stomach and intestines), the respiratory tract, and the endocrine system (liver and endocrine glands).

The Process of Myogenesis

Myogenesis is the formation of muscular tissue, particularly during embryonic development. Muscle fibers form from the fusion of myoblasts into multi-nucleated fibers called myotubes. In early embryonic development, these myoblasts proliferate if enough fibroblast growth factor (FGF) is present. When the FGF runs out, the myoblasts cease division and secrete fibronectin onto their extracellular matrix. The second stage involves the alignment of the myoblasts into the myotubes. The third stage is the actual cell fusion itself. In this stage, calcium ions are critical for development. Myocyte enhance factors (MEFs) promote myogenesis. Serum response factor (SRF) plays a central role during myogenesis, required for the expression of striated alpha-actin genes. Expression of skeletal alpha-actin is also regulated by the androgen receptor, which means steroids can regulate myogenesis.

A myoblast is a type of embryonic progenitor cell that differentiates to form muscle cells. Skeletal muscle fibers are made when myoblasts fuse together, so muscle fibers have multiple nuclei. The fusion of myoblasts is specific to skeletal muscle (e.g., biceps brachii), not cardiac or smooth muscle.

A myocyte (also known as a muscle cell or muscle fiber) is the type of cell found in muscle tissue. These long, tubular cells arise developmentally from myoblasts to form muscles. There are various specialized forms of myocytes with various properties, including cardiac, skeletal, and smooth muscle cells. Cardiac myocytes generate the electrical impulses that control heart rate and other functions.