The integumentary system functions in absorption (oxygen and some medications) and excretion (e.g., perspiration via the eccrine glands).

Describe the role of glands in excretion and absorption

A major function of the integumentary system is absorption and excretion.

There are numerous secretory glands present in the skin which secrete a large range of distinct fluids.

Perspiration, or sweating, is the production of fluids secreted by the sweat glands in the skin of mammals. Two types of sweat glands can be found in humans: eccrine glands and apocrine glands.

Eccrine glands are the major sweat glands of the human body, found in virtually all skin. They produce a clear, odorless substance consisting primarily of water and NaCl (note that the odor from sweat is due to bacterial activity on the secretions of the apocrine glands).

NaCl is reabsorbed in the duct to reduce salt loss. Eccrine glands are active in thermoregulation and are stimulated by the sympathetic nervous system. 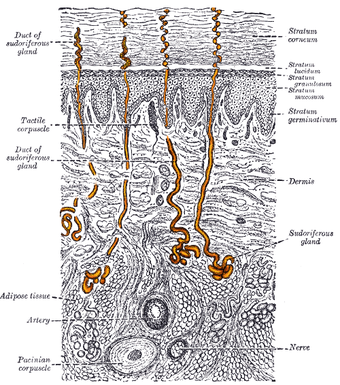 Sweat gland: A sectional view of the skin (magnified), with the eccrine glands highlighted.

The sebaceous glands are microscopic glands in the skin that secrete an oily/waxy matter, called sebum, to lubricate and waterproof the skin and hair of mammals. In humans, they are found in greatest abundance on the face and scalp, though they are distributed throughout all skin sites except the palms and soles. In the eyelids, meibomian sebaceous glands secrete a special type of sebum into tears.

Due to the absorptive capabilities of skin, the cells comprising the outermost 0.25–0.40 mm of the skin can be supplied by external oxygen rather than via the underlying capillary network. Additionally certain medications can be administered through the skin.