During fetal development, bone tissue is created through intramembranous ossification and endochondral ossification. 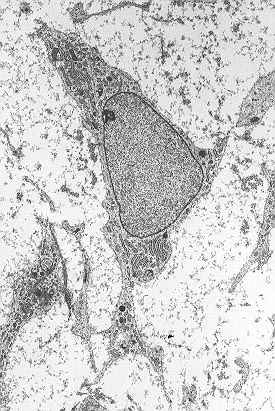 Intramembranous ossification is one of the two essential processes during fetal development of the mammalian skeletal system. It is the process by which bone tissue is created.

Unlike the other process of bone creation— endochondral ossification—intramembranous ossification does not involve cartilage. It is also an essential process during the natural healing of bone fractures and the rudimentary formation of the bones of the head.

The first step in the process is the formation of bone spicules (aggregates of bony matrix) that eventually fuse with each other and become trabeculae. The periosteum is formed and bone growth continues at the surface of trabeculae.

Much like spicules, the increasing growth of trabeculae result in interconnection, and this network is called woven bone. Eventually, woven bone is replaced by lamellar bone. 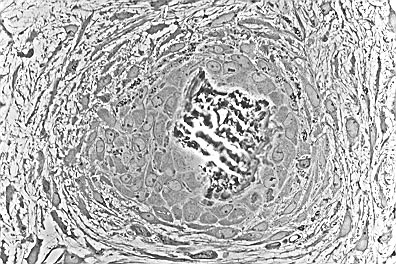 When osteoblasts become trapped in the matrix that they secrete, they differentiate into osteocytes. Osteoblasts continue to line up on the surface, which increases their size. As growth continues, trabeculae become interconnected and woven bone is formed.

The primary center of ossification is the area where bone growth occurs between the periosteum and the bone.

Osteons are units or principal structures of compact bone. During the formation of bone spicules, cytoplasmic processes from osteoblasts interconnect. This becomes the canaliculi of osteons.

Since bone spicules tend to form around blood vessels, the perivascular space is greatly reduced as the bone continues to grow. When replacement with compact bone occurs, this blood vessel becomes the central canal of the osteon. 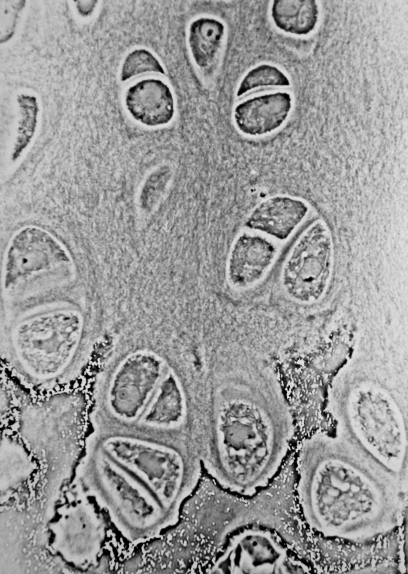 The first site of ossification occurs in the primary center of ossification, which is in the middle of diaphysis (shaft). The perichondrium becomes the periosteum. The periosteum contains a layer of undifferentiated cells (osteoprogenitor cells) that later become osteoblasts.

The osteoblasts secrete osteoid against the shaft of the cartilage model (appositional growth). This serves as support for the new bone. Chondrocytes in the primary center of ossification begin to grow (hypertrophy). They stop secreting collagen and other proteoglycans and begin secreting alkaline phosphatase, an enzyme essential for mineral deposition. Then calcification of the matrix occurs.