The pubis is the lowest and most anterior portion of the hip bones of the pelvis.

The pubic bone forms the anterior region of the pelvis and contributes to the acetabulum, which articulates with the femoral head to form the hip joint.

The pubic bone articulates with the ilium and the ischium on each hip. The internal surface forms the wall of the lesser pelvis and is the point of origin for a portion of the obturator internus muscle. The pubic bone is divisible into a body, a superior ramus, and an inferior ramus.

The Body of the Pubic Bone 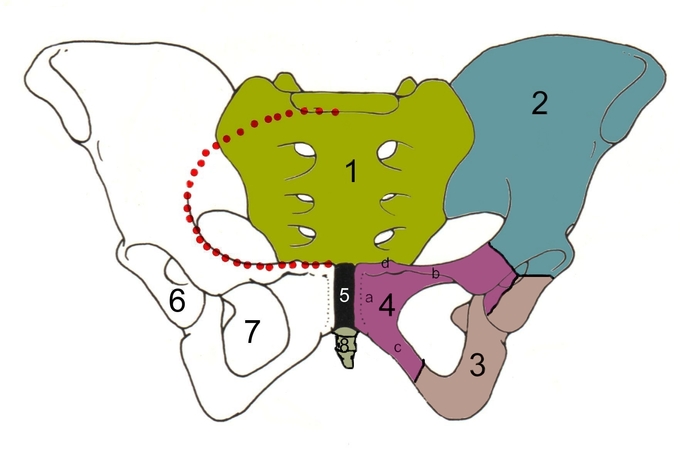 The body of the pubis is a wide, strong, medial, and flat portion of the pubic bone that unites with the pubic symphisis.

The rough superior edge of the corpus, known as the pubic crest, ends laterally in the pubic tubercle. This tubercle, found roughly 3 cm from the pubic symphysis, is a distinctive feature on the lower part of the abdominal wall and is useful when attempting to localize the superficial inguinal ring and the femoral canal of the inguinal canal.

Its internal surface enters into the formation of the wall of the lesser pelvis and gives origin to a portion of the obturator internus muscle.

The superior pubic ramus is one third of the pubic bone. It forms a portion of the obturator foramen and extends from the body to the median plane where it articulates with its counterpart from the opposite side. It is described in two portions, which are a medial flattened part and a narrow lateral prismoid portion.

The inferior pubic ramus is a thin and flat bone that makes up one third of the pubis. It passes laterally and downward from the medial end of the superior ramus, and becomes narrower as it descends and joins with the inferior ramus of the ischium below the obturator foramen.