A tendon is a mechanism by which muscles connect to bone and that transmits force. However, over the past two decades, research has also characterized the elastic properties of tendons and their ability to function as springs. This characteristic allows tendons to passively modulate forces during locomotion, thus providing additional stability with no active work. It also allows tendons to store and recover energy with high efficiency. 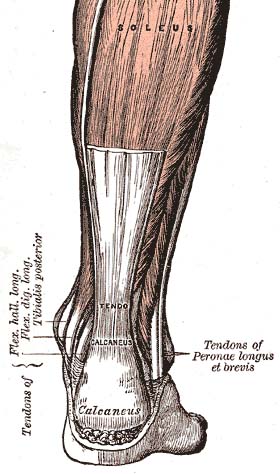 Achilles Tendon: The Achilles tendon, also called the calcaneus, provides stability and limits the range of motion at the ankle joint. It’s depicted in this diagram in relation to the tendo calcaneus.

During a human stride, the Achilles (calcaneal) tendon stretches as the ankle joint undergoes dorsiflexion. During the last portion of the stride, as the foot undergoes plantar flexion (pointing the toes downward), the stored elastic energy is released. Because the tendon stretches, the muscle is able to function with less or even no change in length, allowing it to generate greater force.

Typically, the more stable the joint is, the less is its range of motion and vice versa. Aging is another factor that influences motion due to decreased fluid, thinning of cartilage, shortening of ligaments, and loss of flexibility.