Skeletal muscles interact to produce movements by way of anatomical positioning and the coordinated summation of innervation signals.

Skeletal muscle contractions can be grouped based on the length and frequency of contraction.

When stimulated by a single action potential a muscle contracts and then relaxes. The time between the stimulus and the initiation of contraction is termed the latent period, which is followed by the contraction period. At peak contraction the muscle relaxes and returns to its resting position. Taken all together these three periods are termed a twitch. 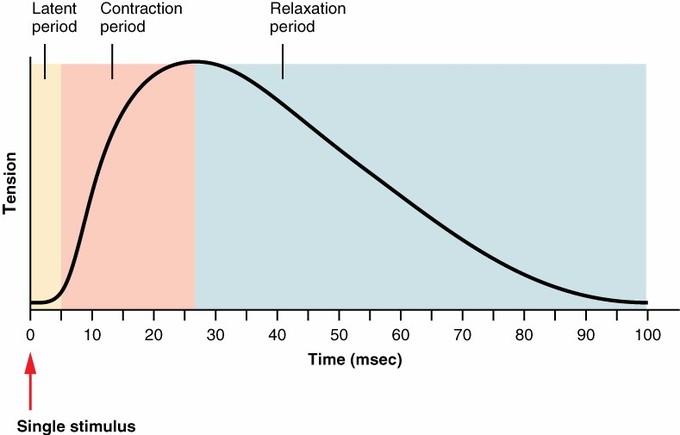 Muscle Twitch Contraction: The time between stimulation and contraction is termed the latent period. After contraction the muscle relaxes back to a resting level of tension. Together these three periods form a single muscle twitch,

If an additional action potential were to stimulate a muscle contraction before a previous muscle twitch had completely relaxed then it would sum onto this previous twitch increasing the total amount of tension produced in the muscle. This addition is termed summation. Within a muscle summation can occur across motor units to recruit more muscle fibers, and also within motor units by increasing the frequency of contraction.

When a weak signal is sent by the central nervous system to contract a muscle, the smaller motor units, being more excitable than the larger ones, are stimulated first. As the strength of the signal increases, more (and larger) motor units are excited. The largest motor units have as much as 50 times the contractile strength as the smaller ones; thus, as more and larger motor units are activated, the force of muscle contraction becomes progressively stronger. A concept known as the size principle allows for a gradation of muscle force during weak contraction to occur in small steps, which become progressively larger as greater amounts of force are required.

For skeletal muscles, the force exerted by the muscle can be controlled by varying the frequency at which action potentials are sent to muscle fibers. Action potentials do not arrive at muscles synchronously, and, during a contraction, only a certain percentage of the fibers in the muscle will be contracting at any given time. In a typical circumstance, when a human is exerting as much muscular force as they are consciously able, roughly one-third of the fibers in that muscle will be contracting at once. This relatively low level of contraction is a protective mechanism to prevent damage to the muscle tissue and attaching tendons and structures.

If the frequency of action potentials generated increases to such a point that muscle tension has reached its peak and plateaued and no relaxation is observed then the muscle contraction is described as a tetanus.

Summation and Tetanus Contractions: Repeated twitch contractions, where the previous twitch has not relaxed completely are called a summation. If the frequency of these contractions increases to the point where maximum tension is generated and no relaxation is observed then the contraction is termed a tetanus.