Arrangement of muscles allows them to move relative to one another, while the insertion joint acts as the pivot point for a lever system.

Skeletal muscle is usually attached to a relatively immovable part of the body at one end and more mobile region on the other end of a joint. The attachment at the immovable end is referred to as the origin and at the moveable end, the insertion. Upon contraction, the insertion is pulled towards the origin. This movement can be described using a simple lever system. Muscles can have multiple origins and insertions which modulate the type of movement they produce.

A lever is composed of three parts: a fixed rod which is attached to a fulcrum (pivot) and a load. Depending on the relative position of the three components, levers can move heavy loads or move loads further or faster when a force is applied.

If a load is close to a pivot and the force is applied far from the pivot, then the lever is said to operate at mechanical advantage. A large but relatively small force can move a heavy object. The classic example of such a lever is a car jack. With big movements of the lever, the heavy car is lifted in small increments off the ground.

If a load is far from a pivot and a force is applied near to the pivot, then the lever is said to operate at a mechanical disadvantage. A large force is required to move a relatively small load, but the speed and distance at which that load can be moved is greatly increased. An example of this is a spade combined with forceful movements of the muscles in the arm, which results in large movements of the spade head.

In muscles, the joints are the pivots and the bones are the fixed rods. The load is the weight of the bone, associated tissues, and other objects being moved, and the force is applied by the muscle at its insertion point.

Levers can also vary based on the relative position of the load, pivot and point of force application. Classes of levers include:

In a first class lever, the load and force sit on either side of the pivot like a seesaw. First-class levers are relatively uncommon in the body, but one example is the triceps brachii muscle of the upper arm which acts to extend the forearm. The force is applied at its point of insertion on the ulna in the forearm, the elbow is the pivot, and the load is the humerus in the upper arm. Thinking of the relative distance between the points of attachment, the triceps brachii can be said to act at a mechanical disadvantage.

Working together using the lever principles discussed above, skeletal muscles can induce a wide range of movements.

Flexors and extensors adjust and change the angle between two body parts. Flexion decreases the angle and extension increases the angle. For example, extension of the arm opens the angle of the elbow joint, while flexion allows for the bending of the arm. Flexion can also move inwards towards the body or forward, such as with hips or shoulders. Extension in this case moves the limbs towards the posterior side of the body lever.

A limb or a body part can be moved upward (or in a superior direction) through elevation. For example, the trapezius elevates the apex of the shoulder upward. Depression is the opposite of elevation, or moving body parts in an inferior direction. 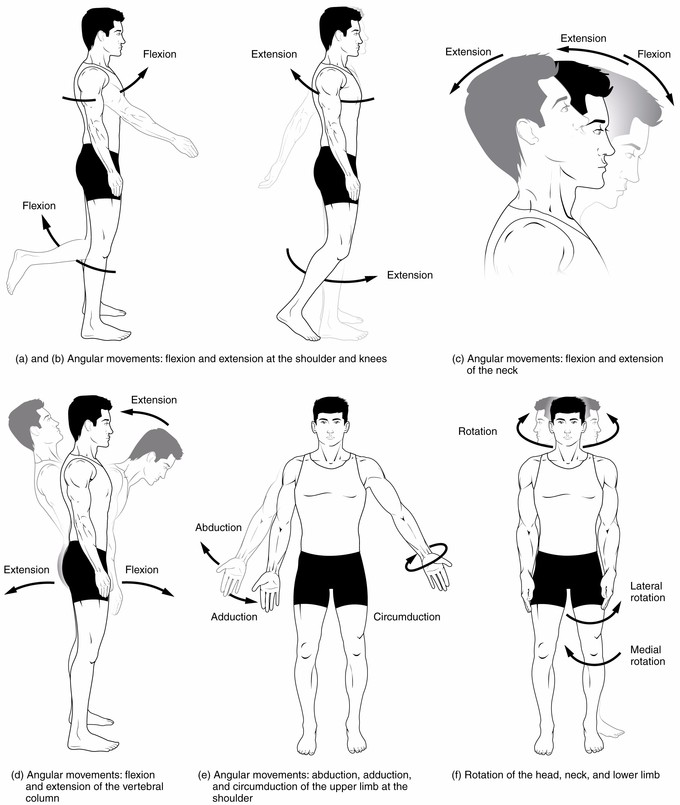 Types of body movements: Muscle positioning around a joint determines the type of movement that is produced.