The function of the digestive system is to break down the foods you eat, release their nutrients, and absorb those nutrients into the body. Although the small intestine is the workhorse of the system, where the majority of digestion occurs, and where most of the released nutrients are absorbed into the blood or lymph, each of the digestive system organs makes a vital contribution to this process (Figure \(\PageIndex{1}\)). 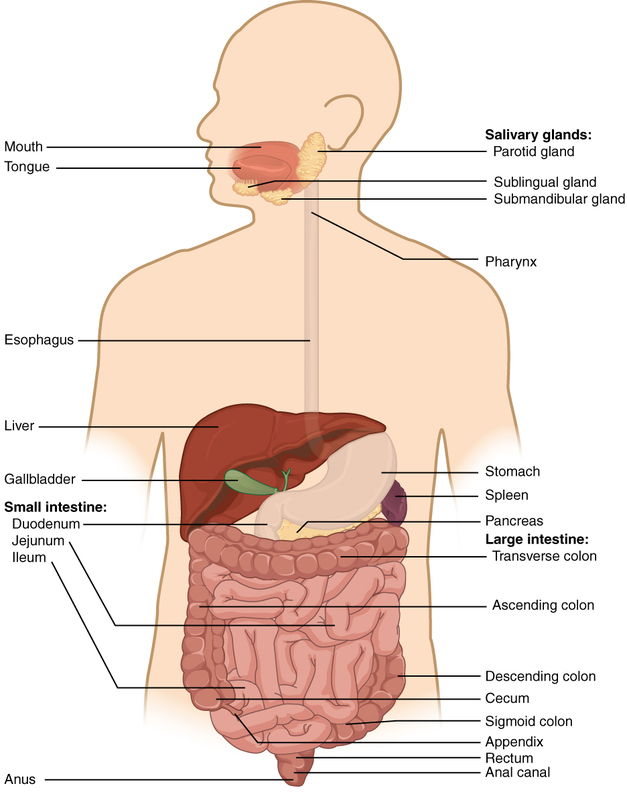 Figure \(\PageIndex{1}\): Components of the Digestive System. All digestive organs play integral roles in the life-sustaining process of digestion.

The easiest way to understand the digestive system is to divide its organs into two main categories. The first group is the organs that make up the alimentary canal. Accessory digestive organs comprise the second group and are critical for orchestrating the breakdown of food and the assimilation of its nutrients into the body. Accessory digestive organs, despite their name, are critical to the function of the digestive system.

Also called the gastrointestinal (GI) tract or gut, the alimentary canal (aliment- = “to nourish”) is a one-way tube about 7.62 meters (25 feet) in length during life and closer to 10.67 meters (35 feet) in length when measured after death, once smooth muscle tone is lost. The main function of the organs of the alimentary canal is to nourish the body. This tube begins at the mouth and terminates at the anus. Between those two points, the canal is modified as the pharynx, esophagus, stomach, and small and large intestines to fit the functional needs of the body. Both the mouth and anus are open to the external environment; thus, food and wastes within the alimentary canal are technically considered to be outside the body. Only through the process of absorption do the nutrients in food enter into and nourish the body’s “inner space.”

Each accessory digestive organ aids in the breakdown of food (Figure \(\PageIndex{2}\)). Within the mouth, the teeth and tongue begin mechanical digestion, whereas the salivary glands begin chemical digestion. Once food products enter the small intestine, the gallbladder, liver, and pancreas release secretions—such as bile and enzymes—essential for digestion to continue. Together, these are called accessory organs because they sprout from the lining cells of the developing gut (mucosa) and augment its function; indeed, you could not live without their vital contributions, and many significant diseases result from their malfunction. Even after development is complete, they maintain a connection to the gut by way of ducts.

Histology of the Alimentary Canal

Throughout its length, the alimentary tract is composed of the same four tissue layers; the details of their structural arrangements vary to fit their specific functions. Starting from the lumen and moving outwards, these layers are the mucosa, submucosa, muscularis, and serosa, which is continuous with the mesentery (see Figure \(\PageIndex{2}\)). Figure \(\PageIndex{2}\): Layers of the Alimentary Canal. The wall of the alimentary canal has four basic tissue layers: the mucosa, submucosa, muscularis, and serosa.

The mucosa is referred to as a mucous membrane, because mucus production is a characteristic feature of gut epithelium. The membrane consists of epithelium, which is in direct contact with ingested food, and the lamina propria, a layer of connective tissue analogous to the dermis. In addition, the mucosa has a thin, smooth muscle layer, called the muscularis mucosa (not to be confused with the muscularis layer, described below).

Epithelium—In the mouth, pharynx, esophagus, and anal canal, the epithelium is primarily a non-keratinized, stratified squamous epithelium. In the stomach and intestines, it is a simple columnar epithelium. Notice that the epithelium is in direct contact with the lumen, the space inside the alimentary canal. Interspersed among its epithelial cells are goblet cells, which secrete mucus and fluid into the lumen, and enteroendocrine cells, which secrete hormones into the interstitial spaces between cells. Epithelial cells have a very brief lifespan, averaging from only a couple of days (in the mouth) to about a week (in the gut). This process of rapid renewal helps preserve the health of the alimentary canal, despite the wear and tear resulting from continued contact with foodstuffs.

Lamina propria—In addition to loose connective tissue, the lamina propria contains numerous blood and lymphatic vessels that transport nutrients absorbed through the alimentary canal to other parts of the body. The lamina propria also serves an immune function by housing clusters of lymphocytes, making up the mucosa-associated lymphoid tissue (MALT). These lymphocyte clusters are particularly substantial in the distal ileum where they are known as Peyer’s patches. When you consider that the alimentary canal is exposed to foodborne bacteria and other foreign matter, it is not hard to appreciate why the immune system has evolved a means of defending against the pathogens encountered within it.

Muscularis mucosa—This thin layer of smooth muscle is in a constant state of tension, pulling the mucosa of the stomach and small intestine into undulating folds. These folds dramatically increase the surface area available for digestion and absorption.

As its name implies, the submucosa lies immediately beneath the mucosa. A broad layer of dense connective tissue, it connects the overlying mucosa to the underlying muscularis. It includes blood and lymphatic vessels (which transport absorbed nutrients), and a scattering of submucosal glands that release digestive secretions. Additionally, it serves as a conduit for a dense branching network of nerves, the submucosal plexus, which functions as described below.

The third layer of the alimentary canal is the muscalaris (also called the muscularis externa). The muscularis in the small intestine is made up of a double layer of smooth muscle: an inner circular layer and an outer longitudinal layer. The contractions of these layers promote mechanical digestion, expose more of the food to digestive chemicals, and move the food along the canal. In the most proximal and distal regions of the alimentary canal, including the mouth, pharynx, anterior part of the esophagus, and external anal sphincter, the muscularis is made up of skeletal muscle, which gives you voluntary control over swallowing and defecation. The basic two-layer structure found in the small intestine is modified in the organs proximal and distal to it. The stomach is equipped for its churning function by the addition of a third layer, the oblique muscle. While the colon has two layers like the small intestine, its longitudinal layer is segregated into three narrow parallel bands, the tenia coli, which make it look like a series of pouches rather than a simple tube.

As soon as food enters the mouth, it is detected by receptors that send impulses along the sensory neurons of cranial nerves. Without these nerves, not only would your food be without taste, but you would also be unable to feel either the food or the structures of your mouth, and you would be unable to avoid biting yourself as you chew, an action enabled by the motor branches of cranial nerves.

Intrinsic innervation of much of the alimentary canal is provided by the enteric nervous system, which runs from the esophagus to the anus, and contains approximately 100 million motor, sensory, and interneurons (unique to this system compared to all other parts of the peripheral nervous system). These enteric neurons are grouped into two plexuses. The myenteric plexus (plexus of Auerbach) lies in the muscularis layer of the alimentary canal and is responsible for motility, especially the rhythm and force of the contractions of the muscularis. The submucosal plexus (plexus of Meissner) lies in the submucosal layer and is responsible for regulating digestive secretions and reacting to the presence of food (see Figure \(\PageIndex{2}\)).

Extrinsic innervations of the alimentary canal are provided by the autonomic nervous system, which includes both sympathetic and parasympathetic nerves. In general, sympathetic activation (the fight-or-flight response) restricts the activity of enteric neurons, thereby decreasing GI secretion and motility. In contrast, parasympathetic activation (the rest-and-digest response) increases GI secretion and motility by stimulating neurons of the enteric nervous system.

The blood vessels serving the digestive system have two functions. They transport the protein and carbohydrate nutrients absorbed by mucosal cells after food is digested in the lumen. Lipids are absorbed via lacteals, tiny structures of the lymphatic system. The blood vessels’ second function is to supply the organs of the alimentary canal with the nutrients and oxygen needed to drive their cellular processes.

Specifically, the more anterior parts of the alimentary canal are supplied with blood by arteries branching off the aortic arch and thoracic aorta. Below this point, the alimentary canal is supplied with blood by arteries branching from the abdominal aorta. The celiac trunk services the liver, stomach, and duodenum, whereas the superior and inferior mesenteric arteries supply blood to the remaining small and large intestines.

The veins that collect nutrient-rich blood from the small intestine (where most absorption occurs) empty into the hepatic portal system. This venous network takes the blood into the liver where the nutrients are either processed or stored for later use. Only then does the blood drained from the alimentary canal viscera circulate back to the heart. To appreciate just how demanding the digestive process is on the cardiovascular system, consider that while you are “resting and digesting,” about one-fourth of the blood pumped with each heartbeat enters arteries serving the intestines. Figure \(\PageIndex{3}\): The Peritoneum. A cross-section of the abdomen shows the relationship between abdominal organs and the peritoneum (darker lines).

Inflammation of the peritoneum is called peritonitis. Chemical peritonitis can develop any time the wall of the alimentary canal is breached, allowing the contents of the lumen entry into the peritoneal cavity. For example, when an ulcer perforates the stomach wall, gastric juices spill into the peritoneal cavity. Hemorrhagic peritonitis occurs after a ruptured tubal pregnancy or traumatic injury to the liver or spleen fills the peritoneal cavity with blood. Even more severe peritonitis is associated with bacterial infections seen with appendicitis, colonic diverticulitis, and pelvic inflammatory disease (infection of uterine tubes, usually by sexually transmitted bacteria). Peritonitis is life threatening and often results in emergency surgery to correct the underlying problem and intensive antibiotic therapy. When your great grandparents and even your parents were young, the mortality from peritonitis was high. Aggressive surgery, improvements in anesthesia safety, the advance of critical care expertise, and antibiotics have greatly improved the mortality rate from this condition. Even so, the mortality rate still ranges from 30 to 40 percent.

The visceral peritoneum includes multiple large folds that envelope various abdominal organs, holding them to the dorsal surface of the body wall. Within these folds are blood vessels, lymphatic vessels, and nerves that innervate the organs with which they are in contact, supplying their adjacent organs. The five major peritoneal folds are described in Table \(\PageIndex{2}\). Note that during fetal development, certain digestive structures, including the first portion of the small intestine (called the duodenum), the pancreas, and portions of the large intestine (the ascending and descending colon, and the rectum) remain completely or partially posterior to the peritoneum. Thus, the location of these organs is described as retroperitoneal.

By clicking on this link, you can watch a short video of what happens to the food you eat as it passes from your mouth to your intestine. Along the way, note how the food changes consistency and form. How does this change in consistency facilitate your gaining nutrients from food?

Q. Which of these organs is not considered an accessory digestive structure?

Q. Which of the following organs is supported by a layer of adventitia rather than serosa?

Q. Which of the following membranes covers the stomach?

Q. What layer of the alimentary canal tissue is capable of helping to protect the body against disease, and through what mechanism?

A. The lamina propria of the mucosa contains lymphoid tissue that makes up the MALT and responds to pathogens encountered in the alimentary canal.

motility
movement of food through the GI tract

retroperitoneal
located posterior to the peritoneum