Phosphorus has a number of functions in the body1. Phosphate is a component of hydroxyapatite in bones and teeth, as described earlier. Non-bone functions include:

Phosphates are used to activate and deactivate a number of proteins. In addition, compounds are also frequently phosphorylated, like the monosaccharides shown below. Figure \(\PageIndex{1}\): Uptake of monosaccharides into the hepatocyte

Phosphates are a component of phospholipids, as shown below.

DNA/RNA have a phosphate backbone as shown below. 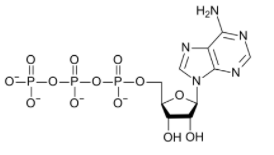