Myelin is produced from the cell membranes of either Schwann cells (for neurons in the PNS) or oligodendroglia/oligodendrocytes (for neurons in the CNS). As such, myelin is enriched with membrane lipids and proteins that are found within these cells. Normally myelin functions to increase nerve cell conduction by increasing the biophysical property of the membrane resistance (i.e. a neuron cell membrane’s leakiness). Myelin reduces membrane leakiness by preventing open channels and as a result, increasing how far a single electrical impulse within the axon will travel. Importantly this also increases how quickly an action potential will travel down an axon – myelin greatly increases the conduction velocity of a neuron (Figure \(\PageIndex{1}\).). 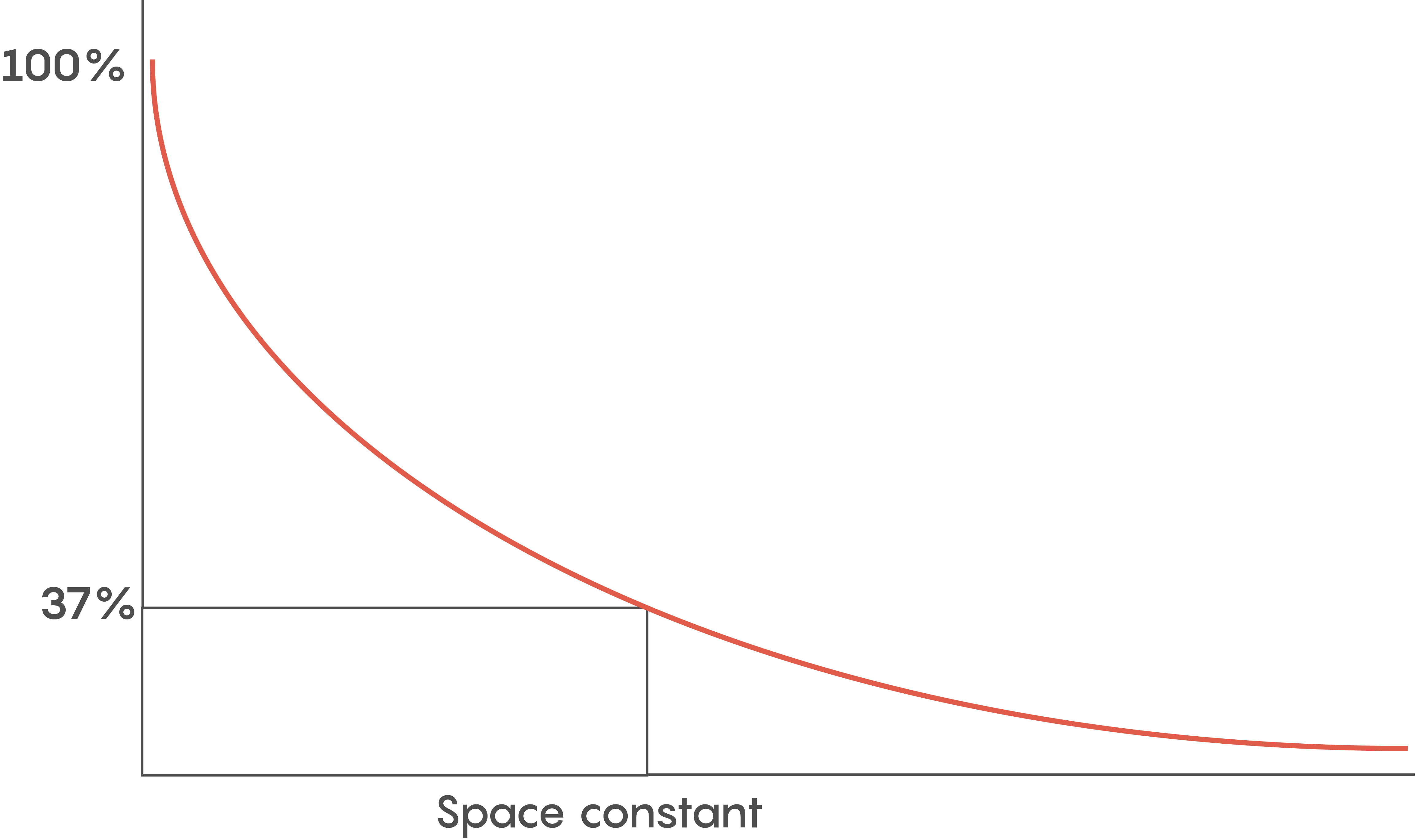 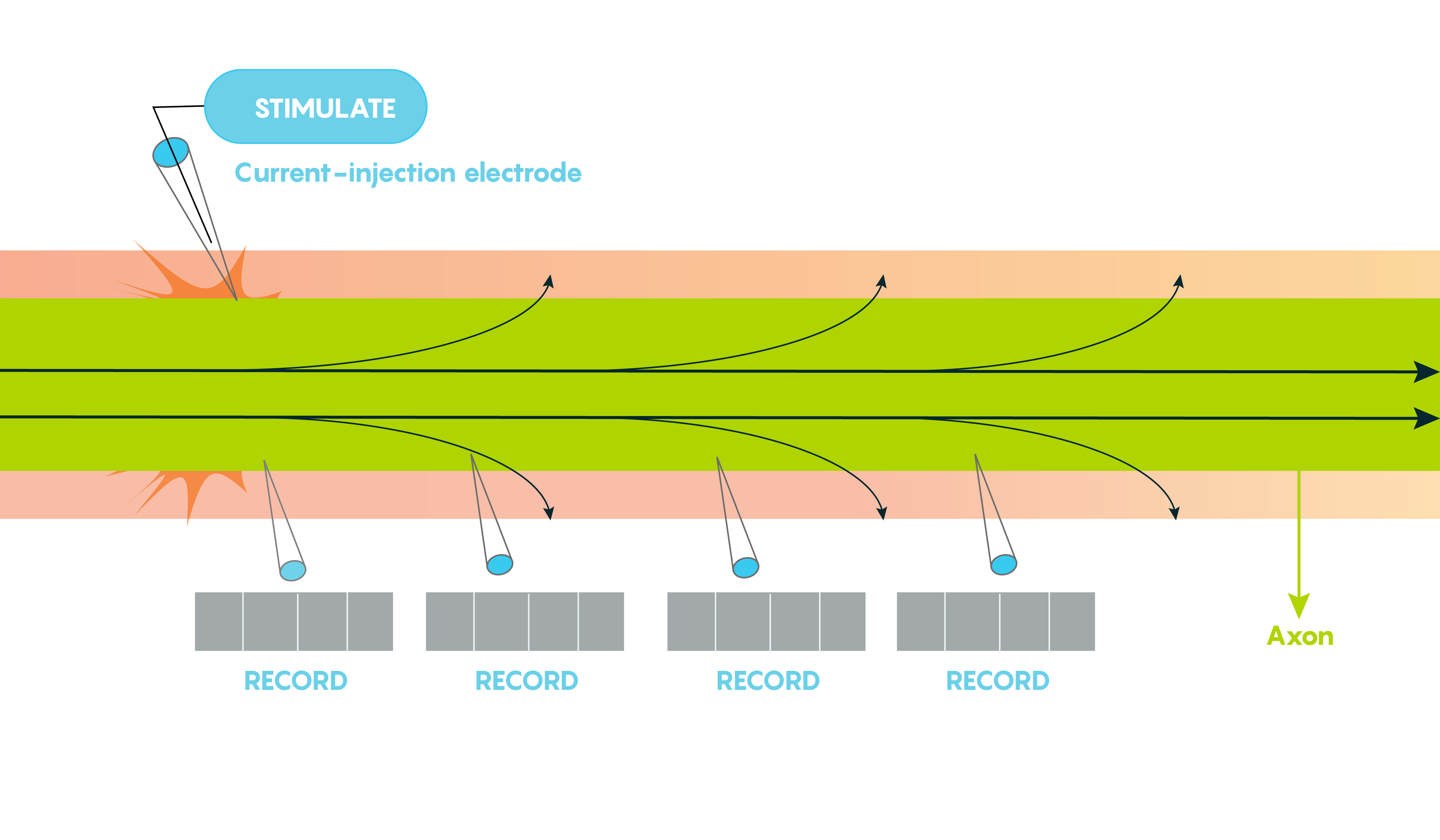 Various factors help to determine how fast an action potential travels down an axon (called the conduction velocity). The biophysical features of a neuron including how big its axonal diameter is and the membrane leakiness, help scientists to determine what is known as the length or space constant (lambda or λ) for each neuron. Why is this λ value important? λ is directly proportional to the conduction velocity – so the factors that determine λ also determine a neuron’s conduction velocity. Let’s not forget –speed thrills within the CNS and brain, and the faster a signal gets there, the more the brain likes it.

Another reason for myelination includes having a lot of neurons so space is a premium. Although the length constant is inversely related to the axonal diameter (i.e. bigger diameter axons have bigger length constants), we need to pack as many neurons into a small space as possible. So within the brain, faster communication means myelination is key.

Large vertebrate nerve fibers are wrapped in myelin sheaths formed by central oligodendroglial cells or Schwann cells in the periphery but the myelin only wraps the axon at specific locations. Myelin is interrupted at regularly spaced intervals, or nodes. This helps the neuron, because during action potential propagation the excitatory signal jumps from one node to the next, and we call this saltatory conduction which is much faster than passive electronic spread. In addition, myelin also helps Rm (leakiness or membrane resistance) because it only directs voltage-sensitive Na+ channels to highly concentrated areas known as the nodes of Ranvier (Figure \(\PageIndex{2}\).). So in many ways myelin helps the neuron “cheat’ by limiting leakiness (i.e. open channels to specific areas). As shown in Figure \(\PageIndex{2}\)., Before glial ensheathment, sodium channels are distributed uniformly, and at low density. At the time of glial ensheathment but before the formation of compact myelin, loose clusters of sodium channels develop at sites that will eventually become nodes. Following the formation of compact myelin and mature paranodal axon-glial cell junctions, well-defined nodal clusters of voltage gated sodium channels are established, and sodium channels are eliminated from the axon membrane beneath the myelin sheath. 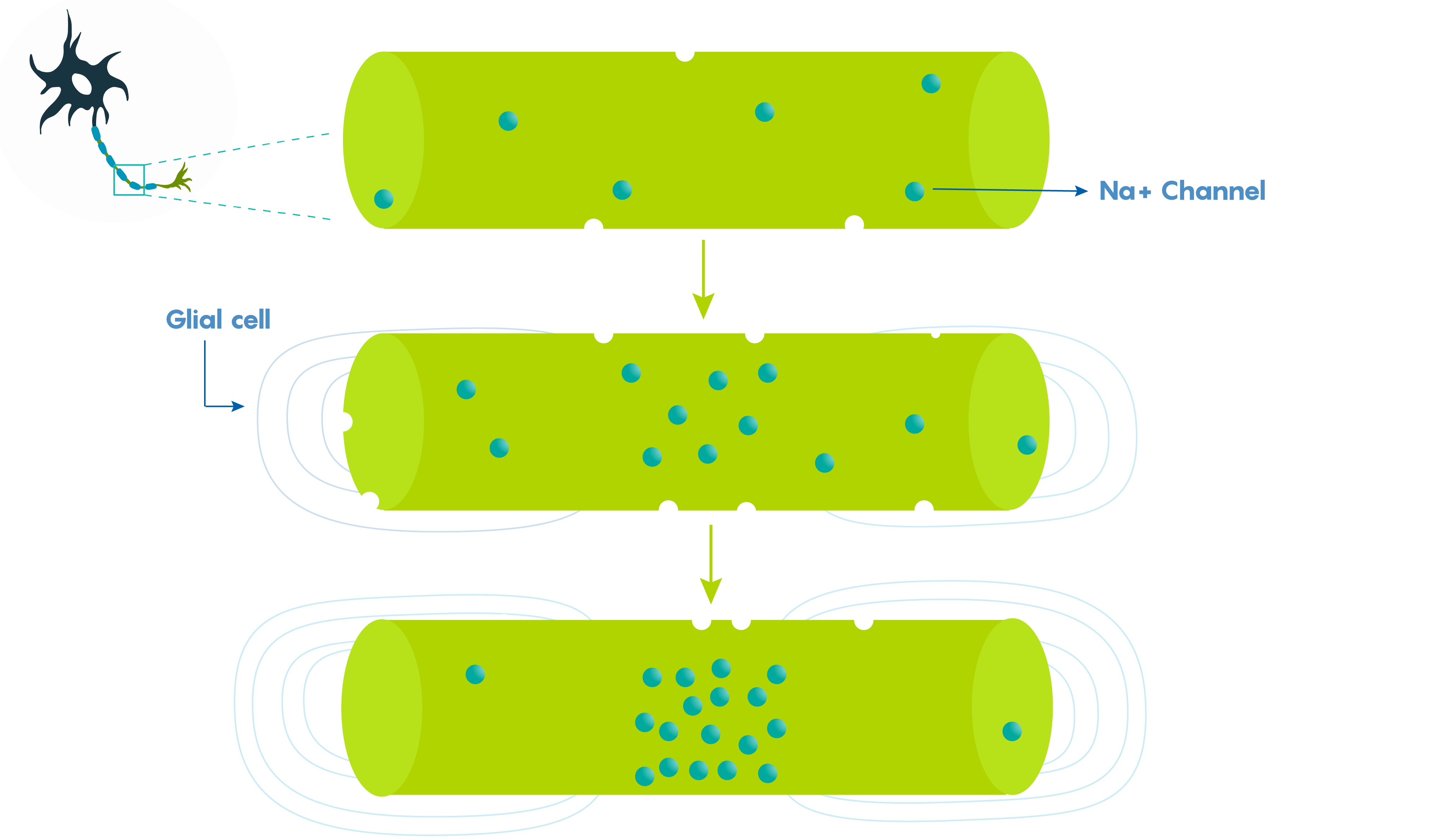 Figure \(\PageIndex{2}\). Myelination directs leakiness to Nodes of Ranvier. During development voltage dependent Na+ channels are found along the entire length of the axon. As myelination occurs, these voltage gated channels (and hence leakiness) are localized to only the node (part c).

Demyelinating diseases are prevalent – and in Canada Multiple Sclerosis affects many

Demyelinating diseases remain one of the most common disorders where 1:500 to 1:1000 adult individuals in North America are affected, but these diseases tend to affect women more frequently than males. As the name suggests, within these diseases, the myelin described above is lost and the axons which previously have been myelinated no longer have myelin, changing their conduction velocities.

Within this disease, the myelin is destructively removed from around the axon which slows down nerve impulses. As axons are demyelinated, these result in inflammatory patches called lesions and it is thought that this disorder is an autoimmune disease. As the disease progresses, oligodendrocytes and, ultimately, the axons themselves are destroyed. There is very compelling evidence that the destruction is caused by selective activation of the cellular immune system and inflammatory molecules.

Although this is a well characterized disorder, we still don’t know much about its causes.

Diagnosis, loss of function, and pathology

Typically an individual with demyelination in multiple sclerosis may have functional deficits that result from reduced speed of conduction which might include loss of vision, different atypical sensations in the periphery and findings on an MRI that include hyperintensities, bright patches on structural MRIs (Figure \(\PageIndex{3}\).), around sites like the lateral ventricle, optic nerve, brainstem, spinal cord, cerebellum and other areas. 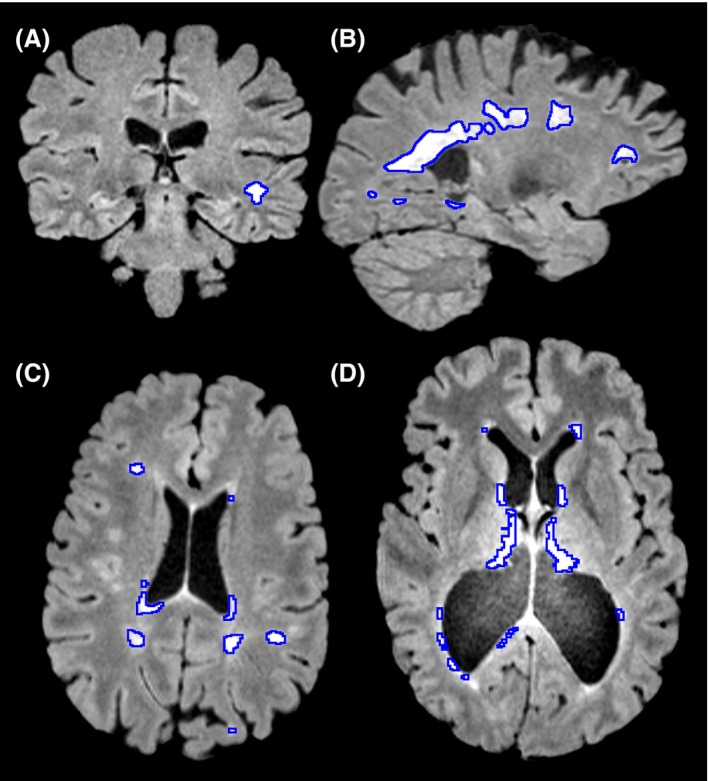 Figure \(\PageIndex{3}\). MRI images showing white hyperintensities in different areas of the brain of an individual experiencing symptoms of multiple sclerosis. (A) A coronal slice showing a lesion in peripheral white matter. (B) A sagittal slice showing large periventricular lesions. (C) An axial slice showing both periventricular and peripheral white matter lesions. (D) A case where severe atrophy caused midline false positives to not be removed, as they were further from midline than expected. Image from: https://www.ncbi.nlm.nih.gov/pmc/articles/PMC4731385/ Under CC by 4.0.

Experimental autoimmune encephalomyelitis (EAE): one of the best studied models of autoimmune diseases. This model produces inflammation of both the brain and spinal cord. This is a good validity model for multiple sclerosis, as EAE is believed to be mediated by T cells and can be induced in many animal models following immunization with a myelin specific protein such as myelin basic protein (MBP) or protolipid protein (PLP) in complete Freund’s adjuvant (or CFA which helps to produce a specific immune response). Within weeks animals develop cellular inflammatory cell infiltration of the myelin sheaths of the central nervous system which then result in demyelination or paralysis (Figure \(\PageIndex{4}\).). 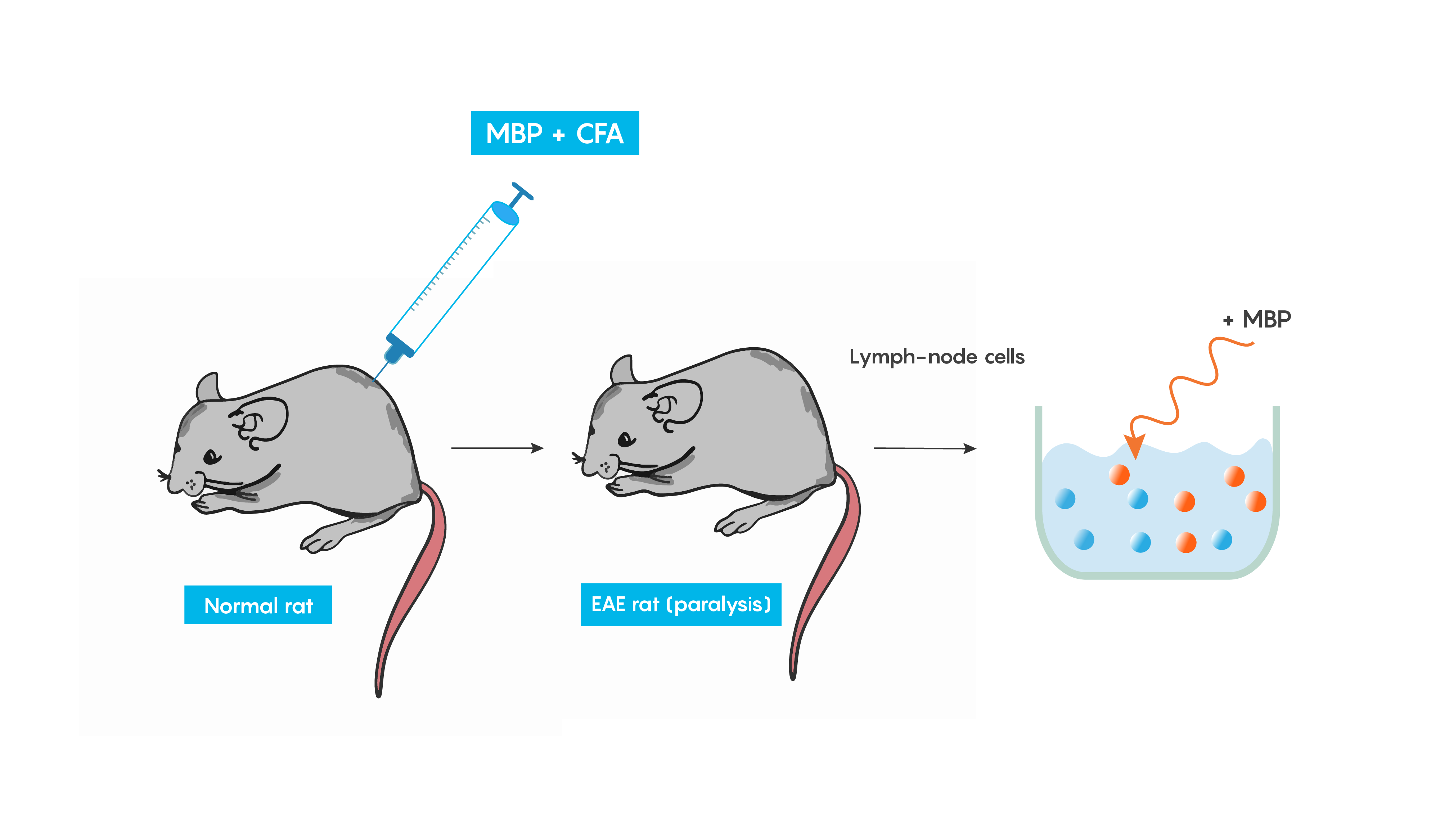 Figure \(\PageIndex{4}\). Inducing an inflammatory response to produce EAE as a model of multiple sclerosis.

The cuprizone model of multiple sclerosis

Cuprizone treatment is one of the most frequently used toxin-induced multiple sclerosis models. Other toxins such as lysolecithin or ethidium bromide require stereotaxic microinjections into brain areas and result in only localized focal demyelination but cuprizone models are advantageous in that oral administration of cuprizone produces a global damage. Following cuprizone ingestion, the mouse often exhibits impaired divalent ion (Cu2+, Zn2+) homeostasis and results in the loss of Cu-Zn superoxide dismutase activity within the brain’s tanycytes resulting in the production of reactive oxygen species (ROS) which activate M1 macrophages in the brain to increase the production and release of pro-inflammatory molecules as highlighted in Figure \(\PageIndex{5}\). 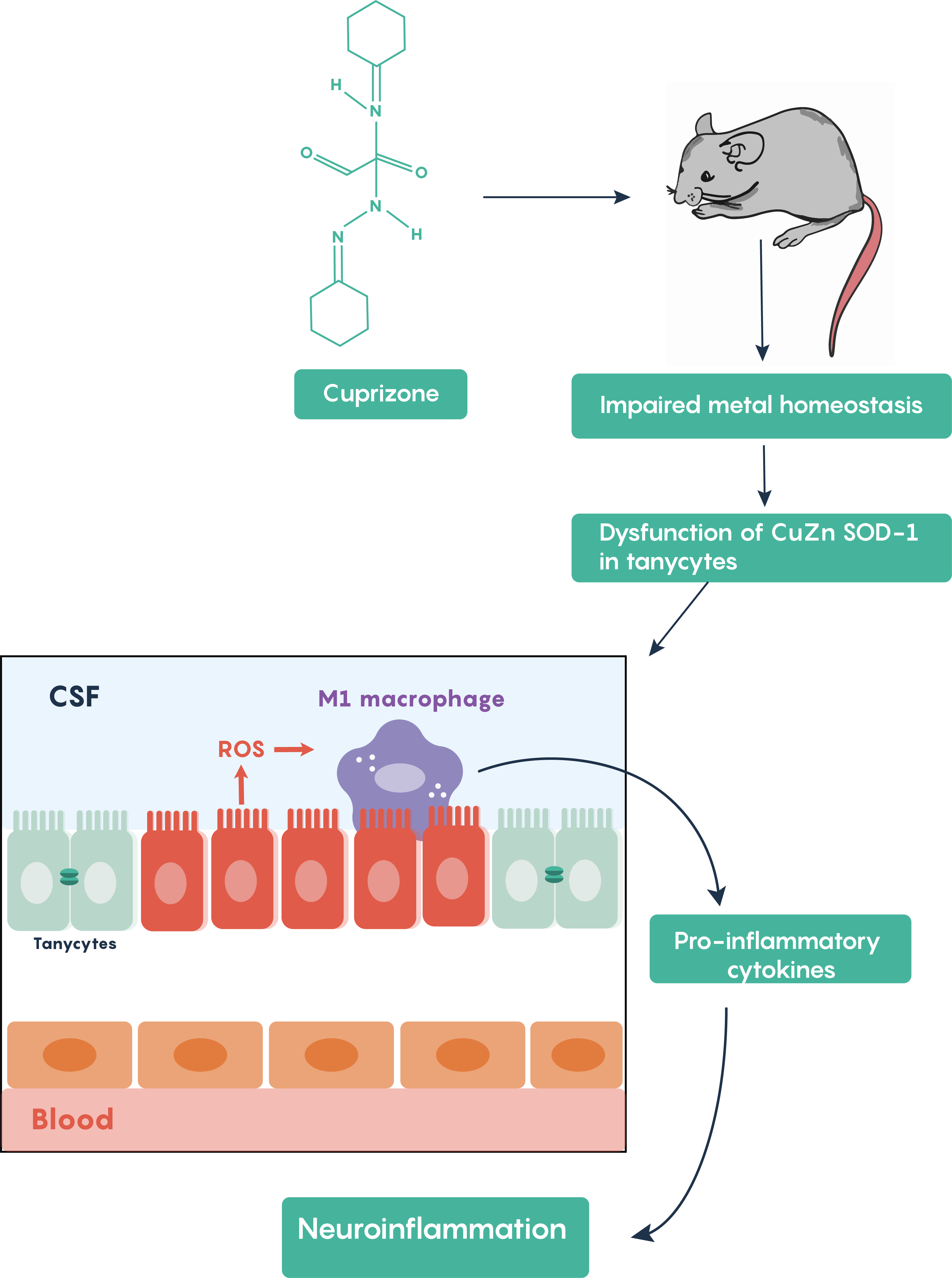 Figure \(\PageIndex{5}\). Mouse model of demyelination in multiple sclerosis highlighting the activation of the inflammatory process.