Previously it was believed that micro-organisms were solely responsible for the production of disease/pathology. However, more recently many different researchers and scientists have begun to re-evaluate this concept that microbes were only present or only useful in studying diseases.

Scientists have known for a very long period of time that there are a number of microbiota which consists of all of the bacteria, viruses and eukaryotes (i.e. fungi) that either grow in and or on the body (1014 bacteria internally; 1010 bacteria on skin; and an estimate quadrillion viruses). Since the microbiota are present on humans throughout almost our entire lifetime, current theories now highlight the possibility that the microbiota might also play a role in health, not only in disease. Conceptually, the genes encoded by all of the microbiota are known collectively as the microbiome. As the number of bacteria within the gut far exceeds all of the other microbiota, most research has started to investigate the role that the gut microbiome might have in health and disease, and more importantly in brain health and disease.

Specifically, within all fields of biology there is an emerging theme that an organ (such as skin) can be colonized by different types of microbes and this colonization does not have to be homogeneous across a particular organ. Although many of these gut bacteria can be treated pharmacologically in order for them to be eliminated, this may not be always be the best treatment. From a research perspective then, one key question that dominates, can controlling our gut microbiome produce changes in our biology, physiology and even behaviour?

What factors affect the gut microbiome?

Many factors have now been identified to affect the gut microbiome. As shown in Figure \(\PageIndex{1}\), an individual’s genetics, the types of drugs or antibiotics they are taking, hygiene, physical activity and other factors, all play a role in either mainintaining or, if changed, altering the gut microbiome. 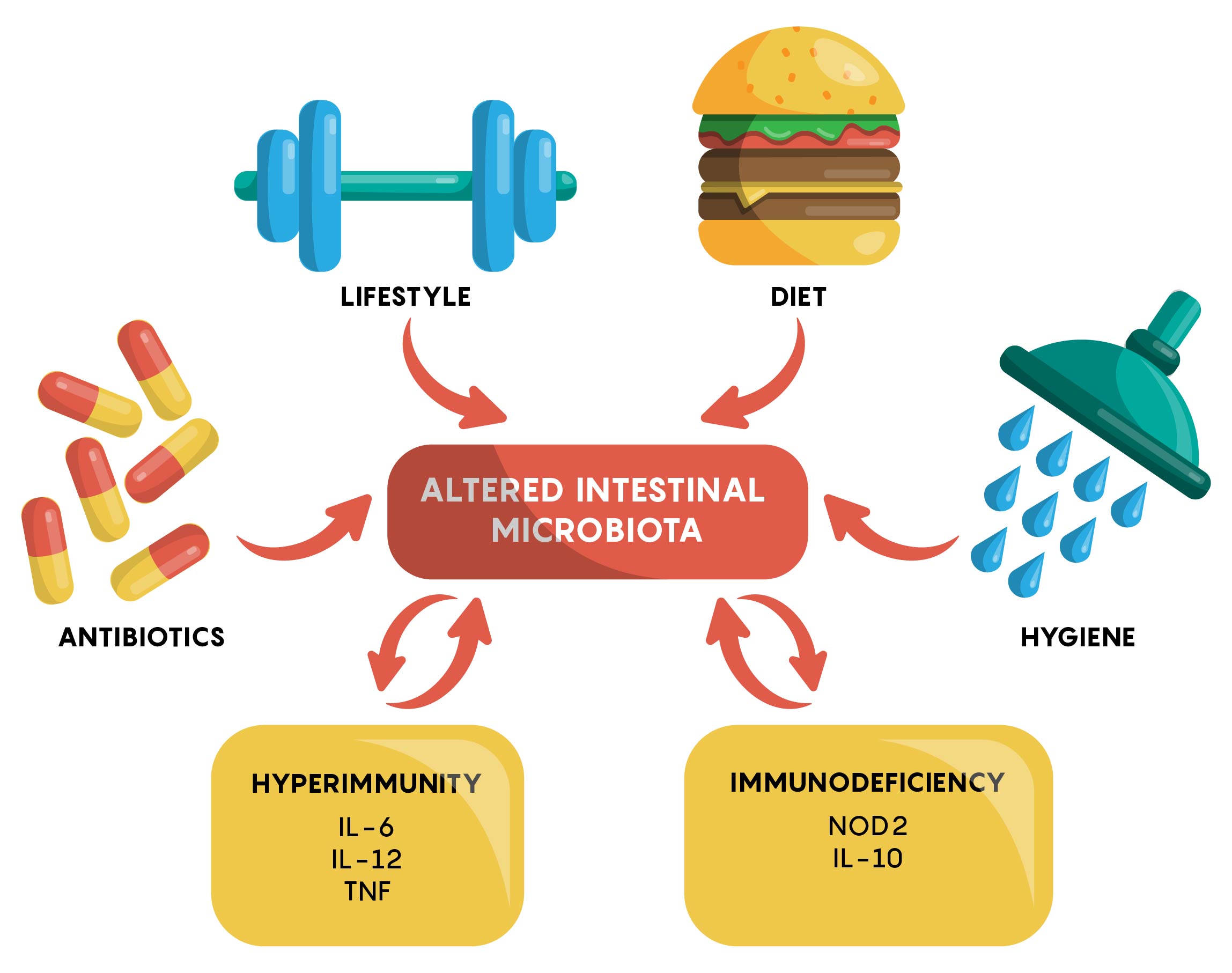 As the intestine is an anaerobic environment, the majority of the gut bacteria species have been found to be anaerobic. Between 500-1000 different bacterial species have been identified in the gut through genetic sequencing, although these species belong to a very small number of phyla. In most healthy adult individuals, the most abundant phyla include Bacteriodetes (Gram(-) rods) and Firmicutes (Gram(+)) although other phyla such as Proteobacteria, Verrumicrobia, and Actinobacteria have also been identified. 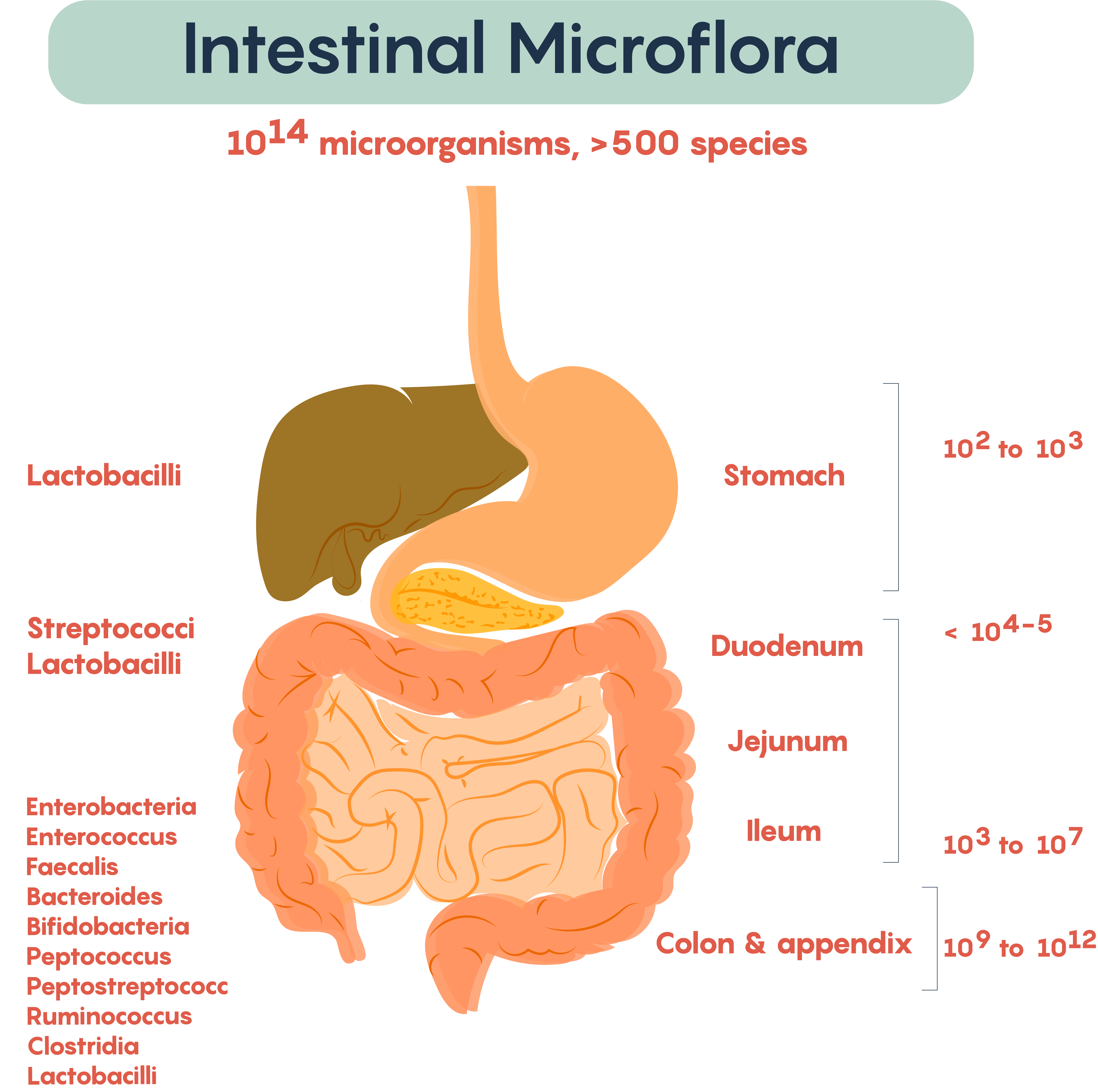 Figure \(\PageIndex{2}\). Microbial density in the gut. Overall, there are 1014 microorganisms residing in the human gut, with over 500 unique species. In the stomach, the majority are the Lactobacilli, making up about 102 to 103. In the Duodenum, there are Streptococci and Lactobacilli, with a concentration of 104 or 105. As we descend past the jejunum and into the ileum, the concentration of bacteria increase dramatically – up to ten million bacteria reside here. Bacteria such as Enterobacteria, Enterococcus, Faecalis, Bacteroides, Bifidobacteria, Peptococcus, Peptosteptococc, Ruminococcus, Clostridia, and Lactobacilli. These bacteria are also common in the colon and appendix, but the microorganism concentrations increase yet again, to 109 to 1012. There is a general trend that complexity and concentration of bacteria increases as we descend the GI tract.

Frequently, researchers not only measure the typical bacteria living in various parts of the gastrointestinal (GI) tract but also measure the microbial density within various regions of the gut. As shown in Figure \(\PageIndex{2}\)., the types of resident or commensal bacteria found in the lumen of the gut regions as well as the density of bacteria (numbers on the right) show the density. Not surprisingly, the numbers as well as the complexity of bacteria increases distally down the length of the GI tract. This complexity started at birth and continues throughout development into adulthood.

But what types of bacteria dominate?

The gut microbiota is dominated by bacteria of which the major divisions of bacteria consist primarily of Bacteriodetes and Firmicutes. As mentioned previously there seems to be variation in bacteria between individuals although there is a suggestion that individuals normally have gut microbiota that dominate (the dominating bacterial fingerprint of each individual is referred to as an enterotype). The dominating bacterial enterotypes in a healthy individual typically consists of the genera of Bacteroides, Prevotella or Ruminococcus (everyone has all 3 bacteria genera but the ratios between each individual will differ from having more or less of each genera).

Interestingly, although everyone has a common “core” group of bacteria as outlined in the previous section, lifestyle effects on microbiota (i.e. changes in diet and physiological status) seem to have the ability to quickly modify the types and numbers of bacteria living in the gut. This offers both a therapeutic opportunity by introducing new bacteria that may be beneficial through probiotics that contain bacteria capable of colonizing the gut.

From the earliest developmental age, our but show large changes in the bacterial genera and their numbers 2 during development, changes again depending on lifestyle changes and ageing. The stability of the gut microbiota and the changes in the types of bacteria is emerging as an important factor that has increasingly been implicated in impacting our health status and may be contributing to neurodegenerative processes (and other changes to the brain) as shown in Chapter 2.

Figure \(\PageIndex{3}\). Developmental Changes. An illustration of the typical developmental colonization of the gut by bacteria. The initial colonies of bacteria that settle depend on the delivery method. In the first week of life, TLR is reduced, which may allow for the formation of stable bacterial colonies in the gut. During the first 6 months, as children are subjected to solid foods, the diversity of microbiota increases. The immune system is able to differentiate the difference between pathogenic and helpful bacteria. Disease appears to correlate with bacteria concentration and composition.

As shown in Figure \(\PageIndex{3}\). above, early bacterial gut colonizers such as Lactobacilli etc. are aerobic and most likely come from maternal sources – these are almost entirely unique and different by the first year of life. Bacteroides and Enterobacteria are anaerobic bacteria and tend to dominate later between 1-6 months of age. One of the most interesting aspects of gut colonization is that the source of bacteria is dependent on the environment as babies born via C-section tend to have colonization by Staphylococcus, Corynebacterium, Propionibacterium spp etc. which are normally found on the skin. This differs from the bacteria found in the gut of babies born through vaginal delivery as Lactobacilli, Prevotella and Sneathia dominate early on. Note that regardless of origin and initial colonization, that stability within the gut is reached around 1-2 years of age and is maintained into adulthood – where a unique balance between Bacterioidetes and Firmicutesexist while an individual stays healthy but can be altered by allergies, obesity, drugs and others to change this balance as shown in Figure \(\PageIndex{3}\).

Dysbiosis represents an imbalance in the normal microbial community within your body. Experiments show that in adults, the bacteria, viruses and eukaryotes populations stay relatively stable. However, this stability occurs only in healthy individuals and these populations can change with diet, disease, treatment and environmental effects. For example, gut viromes (an extension of viral genomes) have been shown to have >95% stability in their sequences over the course of a year in healthy individuals – however this changes with alterations in an individual’s diet.

The effect of diet on the gut microbiome

In diet induced animal models of obesity there is a shift in dominant gut phyla with a decrease in Bacteroidetes and increase in Firmicutes. Similar results have been shown in human twin studies with decrease in Bacteroidetes but increase in Actinobacteria. The shift between these two phyla results in increased capacity for increasing energy from food but also results in inflammatory responses. By altering the gut microbiota in animal models, this seems to be sufficient to induce obesity as a phenotype (Turnbaugh et al., 2006 and 2008). These data suggest that the gut microbiota is capable of not only responding to changes in diet but can also induce phenotypes such as obesity.