As previously outlined in Chapter 1, a state of microbial imbalance inside the body known as dysbiosis, has recently been linked to the development of many diseases and disorders. These include obesity, colorectal cancer, and cardiovascular disease. There is therefore increasing and substantial evidence that homeostasis of the gut microbiota is essential to human health. Exercise, diet, antibiotic use, and personal hygiene are all important factors in maintaining this balance.

There are several ways in which the gut microbiota interacts with the brain. Components of bacteria, such as lipopolysaccharides, activate the innate immune system. In dysbiosis, the innate immune system is overactive, which may result in inflammation of the central nervous system. Certain bacterially-derived metabolites, such as D-lactic acid and ammonia, have also been found to have neurotoxic effects. In addition to these metabolites, many gut bacteria interact with the brain through the production of neurotransmitters, such as serotonin and dopamine. Finally, the gut microbiota communicates with the brain through the vagus nerve, which connects the brainstem to the heart, lungs, and digestive tract (Galland, 2014).

Dysbiosis has also been found to play a role in several neurological and psychiatric disorders, such as Major Depressive Disorder, Parkinson’s Disease, and Alzheimer’s Disease. Many of these diseases and disorders are often comorbid with gastrointestinal disorders. In some cases (e.g. Parkinson’s Disease), it is possible to induce disease in a healthy animal by exposing it to the gut microbiota of a diseased human. The gut and the brain have been shown to communicate bidirectionally, but this link and the mechanism behind it are not fully understood.

Evidence for interactions between the gut and brain

Traditionally, neurological diseases have been studied solely through the lens of issues occurring within the CNS, although taking in to account that peripheral influences have been implicated in the onset and/or progression of diseases that impact the brain. One of these peripheral influences that has been gaining increasing interested in the impact that the gut microbiome has on the brain (Dinan and Cryan, 2015). Emerging data suggest bidirectional communication between the gut and the brain in anxiety, depression, nociception, and autism spectrum disorder (ASD).

Gastrointestinal (GI) physiology and motility are influenced by signals arising both locally within the gut and from the CNS suggesting that such a synergistic interplay could exist. Neurotransmitters, immune signaling, hormones, and neuropeptides produced within the gut may, in turn, impact the brain (Selkrig et al., 2014, Wall et al., 2014) but still remain largely unknown. 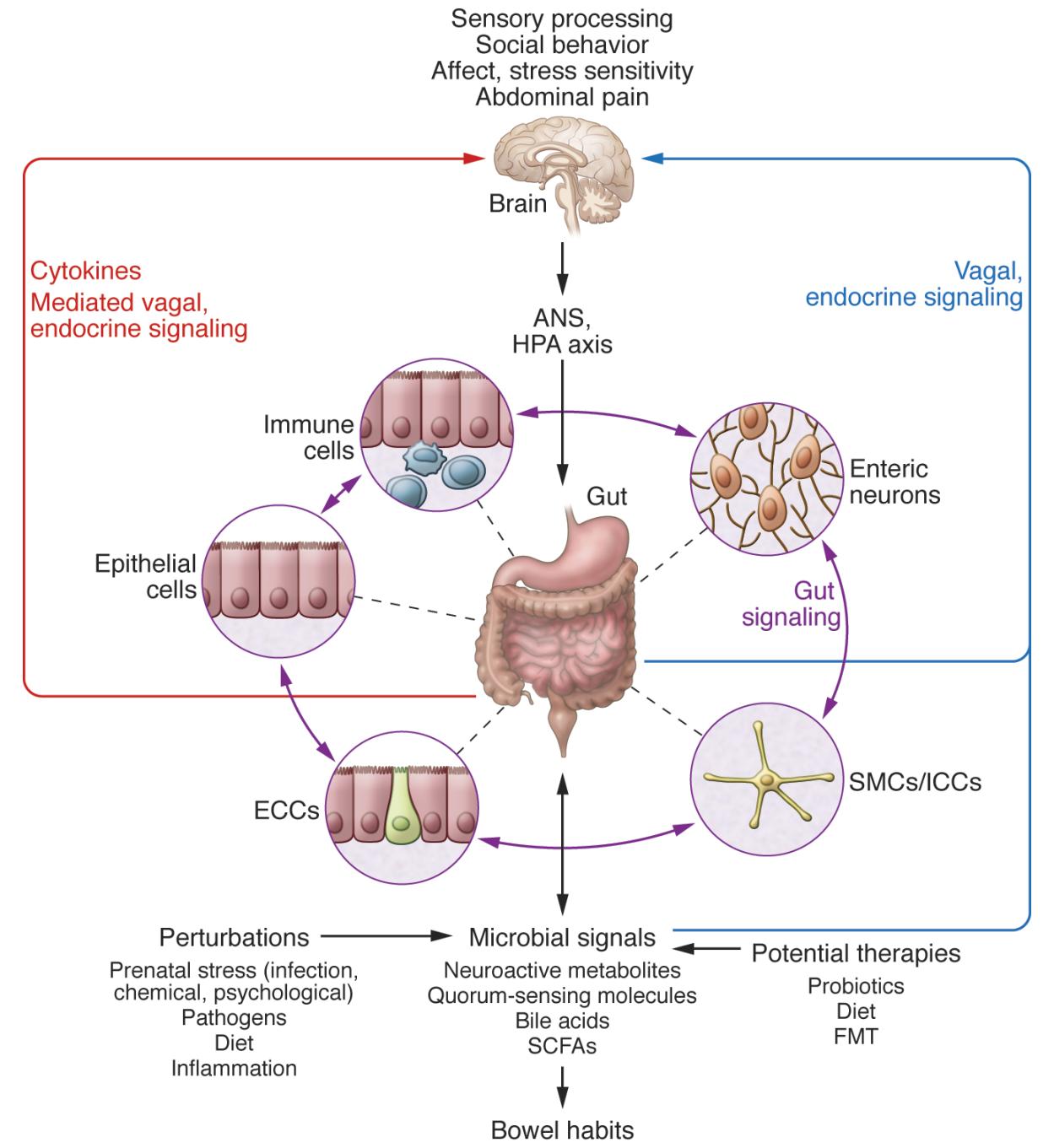 Figure \(\PageIndex{1}\). (taken from opensource https://www.jci.org/articles/view/76304/figure/3) A network of specialized target/transducer cells in the gut wall functions as an interface between the microbiota and the host lumen. In response to external and bodily demands, the brain modulates these specialized cells within this network via the branches of the ANS (sympathetic and parasympathetic/vagal efferents) and the HPA axis. Such modulation can be transient, such as in response to transient perturbations, or long lasting, such as in response to chronically altered brain output. The microbiota is in constant bidirectional communication with this interface via multiple microbial signaling pathways, and this communication is modulated in response to perturbations of the microbiota or the brain. The integrated output of the gut microbial–brain interface is transmitted back to the brain via multiple afferent signaling pathways, including endocrine (metabolites, cytokines, and microbial signaling molecules) and neurocrine (vagal and spinal afferents). While acute alterations in this interoceptive feedback can result in transient functional brain changes (GI infections), chronic alterations are associated with neuroplastic brain changes. Potential therapies aim to normalize altered microbiota signaling to the ENS and central nervous system. FMT, fecal microbial transplant; ICC, interstitial cell of Cajal.

Dysbiosis of the human microbiome has been reported in subjects diagnosed with several neurological diseases. For example, fecal and mucosa-associated gut microbes have been found to be different between individuals with Parkinson’s Disease (PD) and healthy controls although it is not clear what this link is.

Individuals with PD also tend to exhibit intestinal inflammation, and GI abnormalities such as constipation which often precede clinical motor defects by many years (Braak et al., 2003, Verbaan et al., 2007). One theory (Braak’s hypothesis) has suggested that aberrant αSyn accumulation initiates first within the gut and then propagates via the vagus nerve to the brain in a mechanism that resembles prion diseases where infectious proteins spread from one area to the other (Del Tredici and Braak, 2008). A hallmark feature of PD involves αSyn (alpha Synuclein) inclusions, and these appear early in the enteric nervous system (ENS) and the glossopharyngeal and vagal nerves (Braak et al., 2003, Shannon et al., 2012).Interestingly, vagotomized individuals (where the vagus nerve has been surgical cut) are at reduced risk for PD (Svensson et al., 2015). This suggests that there is evidence that in PD an alteration in the gut microbiome might somehow produce neurodegeneration in the brain, and that this factor travels along the vagus nerve.

How would you prove this? What would a researcher need to do?

Recent papers that answered all of the above lines of evidence used germ free mice to examine the effects of the gut microbiota on microglial activation in the brain. Furthermore it was found that the gut bacteria modulate microglia activation during viral infection through production of microbial metabolites, namely short-chain fatty acids (SCFAs). To address whether SCFAs impact neuroimmune responses in a mouse model of PD, animals were treated with a mixture of the SCFAs acetate, propionate, and butyrate (while the animals remained microbiologically sterile). These results demonstrated that the gut microbiome and changes to the gut microbiome could alter production of SCFAs which in turn could signal to alter brain microglia and that this might be the mechanistic link between gut microbiomes, immune system activation and damage to the brain.

The main effect of the gut microbiota perturbations on the brain may occur at times of lower diversity and instability of the gut microbiota (infants and the elderly) and during brain development (perinatal and infant period). During the prenatal period, the developing brain is first exposed to maternal gut-derived metabolites and may be exposed to intrauterine microbes. During birth, the newborn’s gut microbiota is shaped by the maternal vaginal (or skin) microbiota (reviewed earlier). Even though the possibility that pre- and postnatal influences on the microbiota can affect brain development is intriguing, there has not been any research in humans characterizing the effect of maternal microbiota modulation on fetal brain development and adult sequelae of such modulation as might be suspected in autism spectrum disease. Again, it is intriguing to consider the possibilities associated with elderly changes in the gut microbiome and the onset of neurodegenerative conditions but further research is needed in this exciting new area of neuroscience research.