For centuries, researchers have sought to elucidate the mechanisms behind the axiom that a healthy body leads to a healthy mind. It has now been established that exercise, even among minimal commitment exercise routines, has an array of robust effects on the brain, such as enhanced memory, mood, cognitive functioning, plasticity, and learning capabilities (Erickson et al., 2011; Spalding et al., 2013; Phillips et al., 2014). Most notably, exercise has been implicated in having anti-depressant effects and counteracting disease or age-related mental impairment and atrophy, such as Alzheimer’s disease or dementia (Laurin et al., 2001). Yet, until recently, the intermediaries between exercise and its health benefits have not been well-understood.

However, it has been shown that—contrary to the age-old notion that the number of neurons in the brain remains static after prenatal and neonatal development—new neurons can be generated in the adult brain via a process known as neurogenesis, which can attenuate the deleterious effects of neurodegeneration (van Praag et al., 1999). This phenomenon has been linked to exercise, with a significant portion of subsequent neural growth occurring in the dentate gyrus of the hippocampus (Cotman and Berchtold, 2002). Since the hippocampus is critical for memory consolidation and learning, the generation of new neurons and increased plasticity in this brain region may explain the improved cognition and emotional state that accompanies exercise (Gandy et al., 2017; Trinchero et al., 2017). Furthermore, preliminary research has suggested that neurogenesis may also occur in numerous other areas of the brain, including the amygdala and hypothalamus, which may explain the diversity of exercise-derived benefits (Fowler et al., 2008). However, this research is not as extensive or conclusive as hippocampal neurogenesis research, nor is the extent to which neurogenesis occurs in other brain regions as robust as it is in the hippocampus, with the exception of the olfactory bulb (Cotman et al., 2007). One key molecule, brain-derived neurotrophic factor (BDNF), has been shown to modulate neurogenesis and exercise likely influences BDNF levels to alter areas of the brain.

In rodents, hippocampal neurogenesis as a function of exercise has been extensively demonstrated and replicated. To test this, rodents are injected with bromodeoxyuridine (BrdU), which signify actively mitotic cells and are incorporated by daughter cells, thereby allowing the tracing of cell division (del Rio and Soriano, 1989). In some of the earliest work in this field, it was shown that mice allowed to voluntarily exercise on a running wheel exhibited enhanced neurogenesis in the dentate gyrus. By utilizing BrdU as a tracing molecule, it was observed that exercise not only increased proliferation of the progenitor cells in the subgranular zone, but also increased their survival rate as they differentiated and matured (van Praag et al., 1999; Seri et al., 2001; for reviews of neural progenitors and lineage progression see Weissman et al., 2001; Seri et al., 2004; Göritz and Frisén, 2012).

Although it is much more difficult to study exercise-mediated neurogenesis in humans, there is significant evidence that neurogenesis occurs in the adult human brain, especially in the dentate gyrus. Indeed, exercise has been shown to increase the size of the hippocampus in human adults (Erickson et al., 2011). Through postmortem tissue analysis of cancer patients administered BrdU, it has been shown that mature granule neurons are continually generated from the subgranular zone, even in the later stages of life (Eriksson et al., 1998). Interestingly, the participants in this study were not assigned to exercise conditions, and since they were cancer patients near death, it is unlikely they participated in any exercise regimen. This suggests that the hippocampus has the capability to generate new neurons in adulthood independent of exercise. Later sections in this review, however, provide evidence that exercise accentuates neurogenesis in humans and addresses how the amount of exercise modulates the degree of neurogenesis.

Given these early findings establishing a connection between exercise and hippocampal neurogenesis, researchers next turned to examining the biological underpinnings. One of the strongest candidates for bridging the gap between exercise and neurogenesis is BDNF, a growth factor categorized under the neurotrophin family widely expressed in the brain and throughout the rest of the central nervous system (Salehi et al., 2003). Early research on this molecule found that during development in mice, BDNF expression is low during prenatal development, but then increases during the first few weeks after being born and peaks during the shift from embryonic to adult neurogenesis (Bath et al., 2012). This provides key insight into its potential for facilitating neurogenesis, which then spurred much more research interest in its connection to neurogenesis.

As a whole, the neurotrophin family polypeptides are vital to the regulation of the neural processes in neurogenesis, such as proliferation, differentiation, maturation, and plasticity. Within this family, BDNF exhibits the highest degree of expression in the brain, and is primarily synthesized there during exercise (Reichardt, 2006). BDNF can also enter the brain via freely diffusing across the blood brain barrier (Pan et al., 1998; Mousavi and Jasmin, 2006). Furthermore, during exercise, proteins and their metabolic derivatives secreted from peripheral muscles, such as cathepsin B and FNDC5/irisin, also cross the blood brain barrier to mediate BDNF expression in the hippocampus and subsequent neurogenesis and memory improvement (Wrann et al., 2013; Moon et al., 2016). Indeed, mice injected with skeletal muscle endurance factors had elevated levels of hippocampal neurogenesis and increased spatial memory (Kobilo et al., 2010).

BDNF functions by binding to tropomyosin receptor kinase B (TrkB), which is largely expressed in hippocampal neurons. Upon binding, the BDNF-TrkB complex serves as a docking site for numerous signaling cascades, protein phosphorylation cascades, and secondary signaling systems (Huang and Reichardt, 2003; Nykjaer et al., 2005; Yoshii and Constantine-Paton, 2010). Through these pathways (shown in Figure \(\PageIndex{1}\)), BDNF can exert significant regulatory control over many facets of a neuron’s function and thereby influence how these neurons function as a whole within the hippocampus. 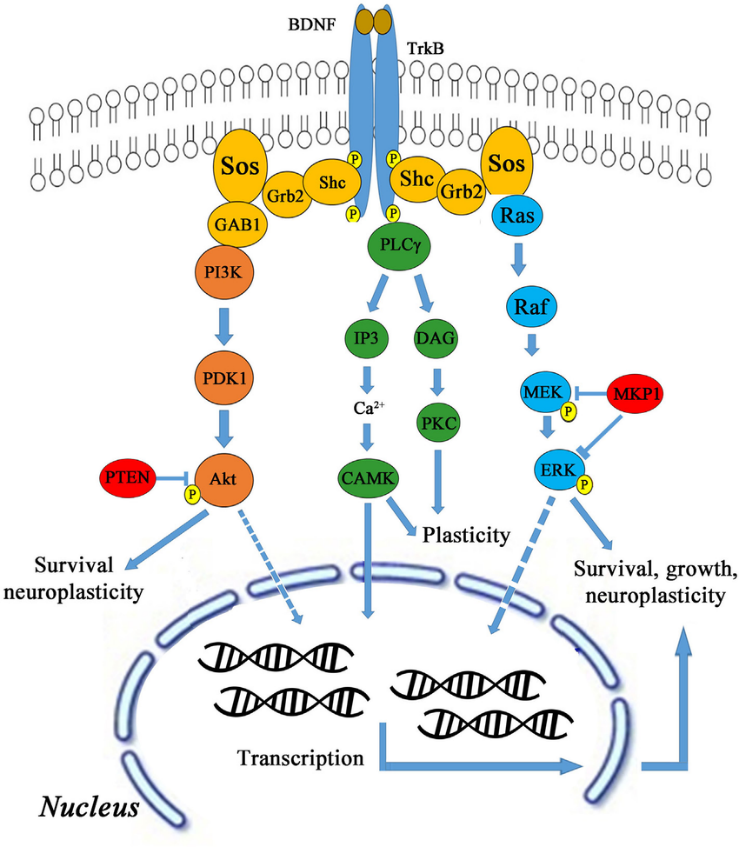 Thus far, both exercise and BDNF have been shown to be associated with increased neurogenesis. Further research has extended this to show that treadmill exercise in mice and aerobic exercise in humans increases BDNF expression by regulating BDNF gene expression in the hippocampus (Kim et al., 2015). This process is largely mediated by neurotransmitter and neuroendocrine systems, with extensive literature supporting acetylcholine (ACh) as a key regulator (Knipper et al., 1994).

In mice allowed to voluntarily engage in wheel running, an increase in BDNF mRNA levels in the dentate gyrus was observed after only a few days of exercise (Neeper et al., 1995). Surprisingly, these levels were maintained throughout several weeks of exercise and corresponded to proportional increases in BDNF protein expression (Russo-Neustadt et al., 1999). When the exercise conditions were supplemented with antibodies blocking TrkB, however, the mice had attenuated learning capabilities involving the hippocampus. Furthermore, these mice also lacked synaptic-specific proteins in the hippocampus, thereby demonstrating that BDNF signaling is necessary to allow the benefits of exercise to manifest (Vaynman et al., 2004, 2006).

Research has also shown that metrics of overall health quality in humans follow a dose-dependent relationship with the duration and intensity of exercise, with the best outcomes linked to moderate exercise (Larson et al., 2006). Further work illustrates that mice show greater improvements in acquisition and retention based learning in hippocampus-dependent tasks following long-term exercise rather than shorter regimes of exercise (Handschin and Spiegelman, 2008; Parachikova et al., 2008; Ploeger et al., 2009). It was found that in mice, even just one session of exercise increased BDNF levels. This effect, however, became amplified following a period of exercise in mice that regularly exercised, with an increased response in BDNF levels relative to mice after just a single session of exercise (Johnson et al., 2003; van Praag et al., 2005; Rasmussen et al., 2009). Consistent with these findings is a meta-analysis of 29 studies spanning 1,111 human participants that analyzed BDNF expression levels across various exercise paradigms. However, many of the studies only examined moderate exercise, and several studies did not report intensity level. Interestingly, considerable evidence from this meta-analysis suggests that humans also experience a dose-response relationship in which each session of exercise corresponds to a dose of increased BDNF expression. Furthermore, regular exercise in moderate amounts has been shown to increase the magnitude of BDNF expression following individual sessions of exercise (Szuhany et al., 2015).

There is not a perfect positive correlation, however, between the amount and intensity of exercise and BDNF expression levels and subsequent health benefits. Extreme exercise has been shown to disrupt a number of metabolic and physiological processes and lead to impaired cognitive performance in humans (Aguiló et al., 2005). Since oxygen is rapidly metabolized during physical exertion, reactive oxygen species (ROS) are naturally produced as a metabolic byproduct. When produced at high levels, such as during bouts of intense exercise, ROS can lead to oxidative damage and increased cellular mortality in both rodents and humans (Radak et al., 2016). Moderate levels of exercise enforce the human body’s antioxidant defense system, but extreme levels of exercise lead to the generation of more ROS than the antioxidant system can defend against, thereby allowing their accumulation as oxidative stress (Mastaloudis et al., 2001). In fact, when treated with hydrogen peroxide, a potent ROS, hippocampal cell cultures taken from rodents showed an inverse relationship between BDNF expression levels and hydrogen peroxide concentration (Kwon et al., 2013). The in vivo production of BDNF as a function of ROS production, however, is less clear and warrants further study.

Not all BDNF is created equal

In humans there are frequent polymorphisms in the BDNF gene which are typically found on position 66 that converts valine to a methionine. Previous work in the early 2000s suggested that somehow this gene was not working well in people with schizophrenia and that this Met66 polymorphism would be linked to disorders of the brain including schizophrenia.

When researchers examined the polymorphisms in the gene and schizophrenia and effect on hippocampal dysfunction in a study of 641 individuals reported in Cell 2003 by Egan et al. cohorts of schizophrenia, siblings and normal individuals were examined to see if there was a relationship. However, it turned out that this polymorphism had no difference on cognitive recall skills in individuals with schizophrenia but normal individuals (i.e. their siblings) who did not have symptoms showed dramatically reduced memory recall with the Met66 mutation. Later research showed that this polymorphism makes it harder to release BDNF, therefore affecting neuronal health. So even if an individual exercised, there is no guarantee that more BDNF will be released! The effectiveness of exercise is literally in your BDNF genes!