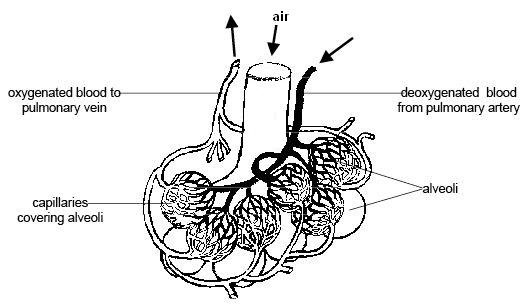 Animals require a supply of energy to survive. This energy is needed to build large molecules like proteins and glycogen, make the structures in cells, move chemicals through membranes and around cells, contract muscles, transmit nerve impulses and keep the body warm. Animals get their energy from the large molecules that they eat as food. Glucose is often the energy source but it may also come from other carbohydrates, as well as fats and protein. The energy is made by the biochemical process known as cellular respiration that takes place in the mitochondria inside every living cell.

The overall reaction can be summarised by the word equation given below.

As you can see from this equation, the cells need to be supplied with oxygen and glucose and the waste product, carbon dioxide, which is poisonous to cells, needs to be removed. The way the digestive system provides the glucose for cellular respiration will be described in Chapter 11 ("The Gut and Digestion"), but here we are only concerned with the two gases, oxygen and carbon dioxide, that are involved in cellular respiration. These gases are carried in the blood to and from the tissues where they are required or produced.

Oxygen enters the body from the air (or water in fish)and carbon dioxide is usually eliminated from the same part of the body. This process is called gas exchange. In fish gas exchange occurs in the gills, in land dwelling vertebrates lungs are the gas exchange organs and frogs use gills when they are tadpoles and lungs, the mouth and the skin when adults.

Mammals (and birds) are active and have relatively high body temperatures so they require large amounts of oxygen to provide sufficient energy through cellular respiration. In order to take in enough oxygen and release all the carbon dioxide produced they need a very large surface area over which gas exchange can take place. The many minute air sacs or alveoli of the lungs provide this. When you look at these under the microscope they appear rather like bunches of grapes covered with a dense network of fine capillaries (see diagram 9.1). A thin layer of water covers the inner surface of each alveolus. There is only a very small distance -just 2 layers of thin cells - between the air in the alveoli and the blood in the capillaries. The gases pass across this gap by diffusion.