The caecum in the rabbit, rat and guinea pig is greatly enlarged to provide a “fermentation vat” for micro-organisms to break down the cellulose plant cell walls. This is called a functional caecum (see diagram 11.12). In the horse both the caecum and the colon are enlarged. As in the rumen, the large cellulose molecules are broken down to smaller molecules that can be absorbed. However, the position of the functional caecum after the main areas of digestion and absorption, means it is potentially less effective than the rumen. This means that the small molecules that are produced there can not be absorbed by the gut but pass out in the faeces. The rabbit and rodents (and foals) solve this problem by eating their own faeces so that they pass through the gut a second time and the products of cellulose digestion can be absorbed in the small intestine. Rabbits produce two kinds of faeces. Softer night-time faeces are eaten directly from the anus and the harder pellets you are probably familiar with, that have passed through the gut twice. 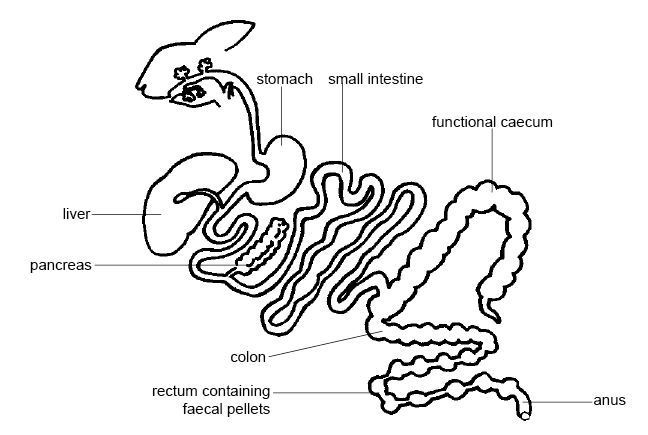