Cows, manatees and primates have two mammary glands but animals like pigs that give birth to large litters may have as many as 12 pairs. Ducts from the gland lead to a nipple or teat and there may be a sinus where the milk collects before being suckled (see diagram 13.14). 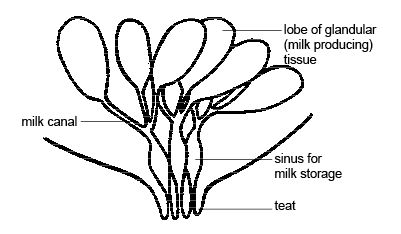 The hormones oestrogen and progesterone stimulate the mammary glands to develop and prolactin promotes the secretion of the milk. Oxytocin from the pituitary gland releases the milk when the baby suckles. The first milk is called colostrum. It is a rich in nutrients and contains protective antibodies from the mother. Milk contains fat, protein and milk sugar as well as vitamins and most minerals although it contains little iron. Its actual composition varies widely from species to species. For example whale’s and seal’s milk has twelve times more fat and four times more protein than cow’s milk. Cow’s milk has far less protein in it than cat’s or dog’s milk. This is why orphan kittens and puppies cannot be fed cow’s milk.