Diagram 3.4: The structure of the plasma membrane

How substances move across the Plasma Membrane

Although you may not know it, you are already familiar with the process of diffusion. It is diffusion that causes a smell (expensive perfume or smelly socks) in one part of the room to gradually move through the room so it can be smelt on the other side. Diffusion occurs in the air and in liquids.

Diagram 3.5 shows what happens when a few crystals of a dark purple dye called potassium permanganate are dropped into a beaker of water. The dye molecules diffuse into the water moving from high to low concentrations so they become evenly distributed throughout the beaker. 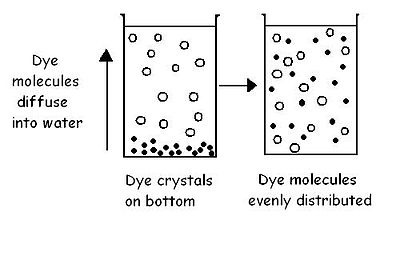 Diagram 3.5: Diffusion in a liquid

In the body, diffusion causes molecules that are in a high concentration on one side of the cell membrane to move across the membrane until they are present in equal concentrations on both sides. It takes place because all molecules have an in-built vibration that causes them to move and collide until they are evenly distributed. It is an absolutely natural process that requires no added energy.

In the animal’s body diffusion is important for moving oxygen and carbon dioxide between the lungs and the blood, for moving digested food molecules from the gut into the blood and for the removal of waste products from the cell.

Although the word may be unfamiliar, you are almost certainly acquainted with the effects of osmosis. It is osmosis that plumps out dried fruit when you soak it before making a fruit cake or makes that wizened old carrot look almost like new when you soak it in water. Osmosis is in fact the diffusion of water across a membrane that allows water across but not larger molecules. This kind of membrane is called a semi-permeable membrane. 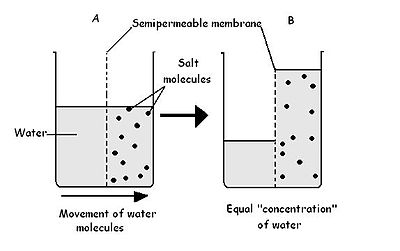 Take a look at side A of diagram 3.6. It shows a container divided into two parts by an artificial semi-permeable membrane. Water is poured into one part while a solution containing salt is poured into the other part. Water can cross the membrane but the salt cannot. The water crosses the semi-permeable membrane by diffusion until there is an equal amount of water on both sides of the membrane. The effect of this would be to make the salt solution more diluted and cause the level of the liquid in the right-hand side of the container to rise so it looked like side B of diagram 3.6. This movement of water across the semi-permeable membrane is called osmosis. It is a completely natural process that requires no outside energy.

Although it would be difficult to do in practice, imagine that you could now take a plunger and push down on the fluid in the right-hand side of container B so that it flowed back across the semi-permeable membrane until the level of fluid on both sides was equal again. If you could measure the pressure required to do this, this would be equal to the osmotic pressure of the salt solution. (This is a rather advanced concept at this stage but you will meet this term again when you study fluid balance later in the course).

Diagram 3.7: Osmosis in red cells placed in a hypotonic solution

The plasma membrane of cells acts as a semi-permeable membrane. If red blood cells, for example, are placed in water, the water crosses the membrane to make the amount of water on both sides of it equal (see diagram 3.7). This means that the water moves into the cell causing it to swell. This can occur to such an extent that the cell actually bursts to release its contents. This bursting of red blood cells is called haemolysis. In a situation such as this when the solution on one side of a semi-permeable membrane has a lower concentration than that on the other side, the first solution is said to be hypotonic to the second.

Diagram 3.8: Osmosis in red cells placed in a hypertonic solution

Now think what would happen if red blood cells were placed in a salt solution that has a higher salt concentration than the solution within the cells (see diagram 3.8). Such a bathing solution is called a hypertonic solution. In this situation the “concentration” of water within the cells would be higher than that outside the cells. Osmosis (diffusion of water) would then occur from the inside of the cells to the outside solution, causing the cells to shrink.

A solution that contains 0.9% salt has the same concentration as body fluids and the solution within red cells. Cells placed in such a solution would neither swell nor shrink (see diagram 3.9). This solution is called an isotonic solution. This strength of salt solution is often called normal saline and is used when replacing an animal’s body fluids or when cells like red blood cells have to be suspended in fluid.

Remember - osmosis is a special kind of diffusion. It is the diffusion of water molecules across a semi-permeable membrane. It is a completely passive process and requires no energy.

Sometimes it is difficult to remember which way the water molecules move. Although it is not strictly true in a biological sense, many students use the phrase “SALT SUCKS” to help them remember which way water moves across the membrane when there are two solutions of different salt concentrations on either side.

As we have seen water moves in and out of the cell by osmosis. All water movement from the intestine into the blood system and between the blood capillaries and the fluid around the cells (tissue or extra cellular fluid) takes place by osmosis. Osmosis is also important in the production of concentrated urine by the kidney.

Active transport is important in maintaining different concentrations of the ions sodium and potassium on either side of the nerve cell membrane. It is also important for removing valuable molecules such as glucose, amino acids and sodium ions from the urine. 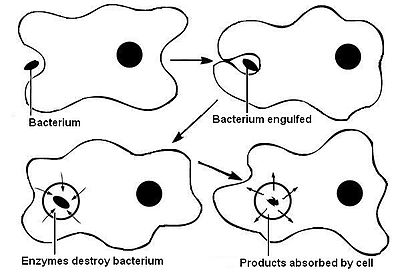 Phagocytosis is sometimes called “cell eating”. It is a process that requires energy and is used by cells to move solid particles like bacteria across the plasma membrane. Finger-like projections from the plasma membrane surround the bacteria and engulf them as shown in diagram 3.10. Once within the cell, enzymes produced by the lysosomes of the cell (described later) destroy the bacteria.

The destruction of bacteria and other foreign substance by white blood cells by the process of phagocytosis is a vital part of the defense mechanisms of the body.

Pinocytosis or “cell drinking” is a very similar process to phagocytosis but is used by cells to move fluids across the plasma membrane. Most cells carry out pinocytosis (note the pinocytotic vesicle in diagram 3.3).

Exocytosis is the process by means of which substances formed in the cell are moved through the plasma membrane into the fluid outside the cell (or extra-cellular fluid). It occurs in all cells but is most important in secretory cells (e.g. cells that produce digestive enzymes) and nerve cells.