The skull of mammals consists of 30 separate bones that grow together during development to form a solid case protecting the brain and sense organs. The “box “enclosing and protecting the brain is called the cranium (see diagram 6.4). The bony wall of the cranium encloses the middle and inner ears, protects the organs of smell in the nasal cavity and the eyes in sockets known as orbits. The teeth are inserted into the upper and lower jaws (see Chapter 5 for more on teeth) The lower jaw is known as the mandible. It forms a joint with the skull moved by strong muscles that allow an animal to chew. At the front of the skull is the nasal cavity, separated from the mouth by a plate of bone called the palate. Behind the nasal cavity and connecting with it are the sinuses. These are air spaces in the bones of the skull which help keep the skull as light as possible. At the base of the cranium is the foramen magnum, translated as “big hole”, through which the spinal cord passes. On either side of this are two small, smooth rounded knobs or condyles that articulate (move against) the first or Atlas vertebra. 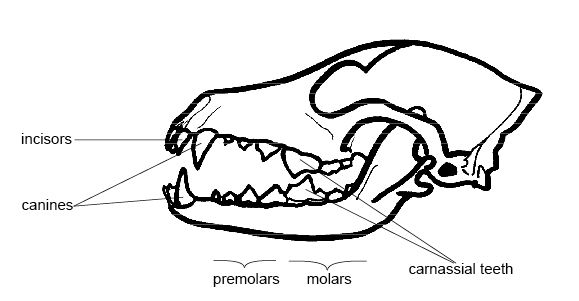