The process of breathing moves air in and out of the lungs. Sometimes this process is called respiration but it is important not to confuse it with the chemical process, cellular respiration, that takes place in the mitochondria of cells. Breathing is brought about by the movement of the diaphragm and the ribs.

Diagram 9.4a: Inspiration; Diagram 9.4b: Expiration

The diaphragm is a thin sheet of muscle that completely separates the abdominal and thoracic cavities. When at rest it domes up into the thoracic cavity but during breathing in or inspiration it flattens. At the same time special muscles in the chest wall move the ribs forwards and outwards. These movements of both the diaphragm and the ribs cause the volume of the thorax to increase. Because the pleural cavities are airtight, the lungs expand to fill this increased space and air is drawn down the trachea into the lungs (see diagram 9.4a).

Expiration or breathing out consists of the opposite movements. The ribs move down and in and the diaphragm resumes its domed shape so the air is expelled (see diagram 9.4b). Expiration is usually passive and no energy is required (unless you are blowing up a balloon). 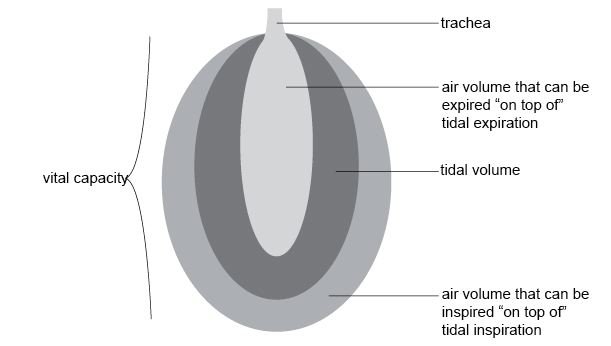 As you sit here reading this just pay attention to your breathing. Notice that your in and out breaths are really quite small and gentle (unless you have just rushed here from somewhere else!). Only a small amount of the total volume that your lungs hold is breathed in and out with each breath. This kind of gentle “at rest” breathing is called tidal breathing and the volume breathed in or out (they should be the same) is the tidal volume (see diagram 9.5). Sometimes people want to measure the volume of air inspired or expired during a minute of this normal breathing. This is called the minute volume. It could be estimated by measuring the volume of one tidal breath and then multiplying that by the number of breaths in a minute. Of course it is possible to take a deep breath and breathe in as far as you can and then expire as far as possible. The volume of the air expired when a maximum expiration follows a maximum inspiration is called the vital capacity (see diagram 9.5).

Breathing is usually an unconscious activity that takes place whether you are awake or asleep, although, humans at least, can also control it consciously. Two regions in the hindbrain called the medulla oblongata and pons control the rate of breathing. These are called respiratory centres. They respond to the concentration of carbon dioxide in the blood. When this concentration rises during a bout of activity, for example, nerve impulses are automatically sent to the diaphragm and rib muscles that increase the rate and the depth of breathing. Increasing the rate of breathing also increases the amount of oxygen in the blood to meet the needs of this increased activity.

The Acidity Of The Blood And Breathing

The degree of acidity of the blood (the acid-base balance) is critical for normal functioning of cells and the body as a whole. For example, blood that is too acidic or alkaline can seriously affect nerve function causing a coma, muscle spasms, convulsions and even death. Carbon dioxide carried in the blood makes the blood acidic and the higher the concentration of carbon dioxide the more acidic it is. This is obviously dangerous so there are various mechanisms in the body that bring the acid-base balance back within the normal range. Breathing is one of these homeostatic mechanisms. By increasing the rate of breathing the animal increases the amount of dissolved carbon dioxide that is expelled from the blood. This reduces the acidity of the blood.

Birds have a unique respiratory system that enables them to respire at the very high rates necessary for flight. The lungs are relatively solid structures that do not change shape and size in the same way as mammalian lungs do. Tubes run through them and connect with a series of air sacs situated in the thoracic and abdominal body cavities and some of the bones. Movements of the ribs and breastbone or sternum expand and compress these air sacs so they act rather like bellows and pump air through the lungs. The evolution of this extremely efficient system of breathing has enabled birds to migrate vast distances and fly at altitudes higher than the summit of Everest.