Figure 9.2.1: The human skeleton contains 206 bones. It is divided into two main parts, the axial and appendicular. © Networkgraphics Bones are composed of approximately 65 percent inorganic material known as mineralized matrix. This mineralized matrix consists of mostly crystallized hydroxyapatite. The bone’s hard crystal matrix of bone tissue gives it its rigid structure. The other 35 percent of bone is organic material, most of which is the fibrous protein, collagen. The collagen fibers are networked throughout bone tissue and provide it with flexibility and strength. The bones’ inorganic and organic materials are structured into two different tissue types. There is spongy bone, also called trabecular or cancellous bone, and compact bone, also called cortical bone (Figure 9.2.1). The two tissue types differ in their microarchitecture and porosity. Trabecular bone is 50 to 90 percent porous and appears as a lattice-like structure under the microscope. It is found at the ends of long bones, in the cores of vertebrae, and in the pelvis. Trabecular bone tissue makes up about 20 percent of the adult skeleton. The more dense cortical bone is about 10 percent porous and it looks like many concentric circles, similar to the rings in a tree trunk, sandwiched together (Figure 9.2.2). Cortical bone tissue makes up approximately 80 percent of the adult skeleton. It surrounds all trabecular tissue and is the only bone tissue in the shafts of long bones.

Figure 9.2.2: The two basic tissue types of bones are trabecular and cortical. Trabecular (spongy) and cortical (compact) bone tissues differ in their microarchitecture and porosity. © Networkgraphics

During infancy, childhood, and adolescence, bones are continuously growing and changing shape through two processes called growth (or ossification) and modeling. In fact, in the first year of life, almost 100 percent of the bone tissue in the skeleton is replaced. In the process of modeling, bone tissue is dismantled at one site and built up at a different site. In adulthood, our bones stop growing and modeling, but continue to go through a process of bone remodeling. In the process of remodeling, bone tissue is degraded and built up at the same location. About 10 percent of bone tissue is remodeled each year in adults. As observed in Video 9.1, bones adapt their structure to the forces acting upon them, even in adulthood. This phenomenon is called Wolff’s law, which states that bones will develop a structure that is best able to resist the forces acting upon them. This is why exercising, especially when it involves weight-bearing activities, increases bone strength.

The first step in bone remodeling is osteocyte activation (see Figure 9.2.3). Osteocytes detect changes in mechanical forces, calcium homeostasis, or hormone levels. In the second step, osteoclasts are recruited to the site of the degradation. Osteoclasts are large cells with a highly irregular ruffled membrane. These cells fuse tightly to the bone and secrete hydrogen ions, which acidify the local environment and dissolve the minerals in the bone tissue matrix. This process is called bone resorption and resembles pit excavation. Our bodies excavate pits in our bone tissue because bones act as storehouses for calcium and other minerals. Bones supply these minerals to other body tissues as the demand arises. Bone tissue also remodels when it breaks so that it can repair itself. Moreover, if you decide to train to run a marathon your bones will restructure themselves by remodeling to better able sustain the forces of their new function. 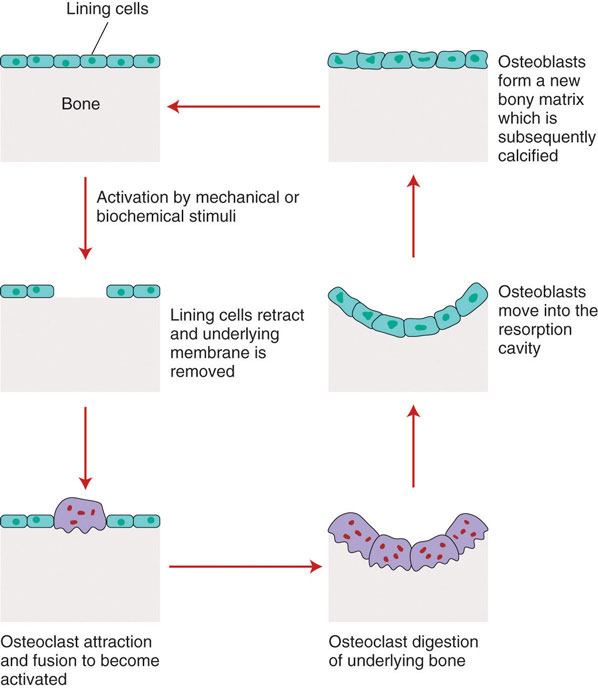