Purpose and Effectiveness of Contraceptives

The contraceptive effectiveness rate, or failure rate, is calculated based on typical use as the percentage of typical couples who use the method for one full year and experience an unintended pregnancy.

There are two main categories for birth control methods, reversible methods and permanent methods. Reversible methods may use hormones, a barrier, or fertility awareness to reduce the chance of pregnancy.

When a woman is pregnant they no longer release an egg each month and if there is no egg released, they cannot become pregnant. Hormonal methods reduce the chance of pregnancy by providing hormones to the woman that tricks the woman’s body into thinking they are pregnant, thus the egg is not released each month. There are several different hormonal methods that each provide the hormones to the woman in a different way.

HORMONAL METHODS DO NOT PROTECT AGAINST SEXUALLY TRANSMITTED DISEASES BUT ARE EFFECTIVE FOR BIRTH CONTROL.

In order for pregnancy to occur the egg from a woman and the sperm from a man must meet. If the sperm fertilizes the egg then conception, or pregnancy, occurs. Barrier methods of birth control work by creating a barrier in which the egg and sperm cannot meet.

Permanent methods of birth control are also referred to as sterilization. These methods are for those who are sure that they do not want to conceive a child. Women choosing a permanent method can have their fallopian tubes tied or closed off, called a tubal ligation, or they can choose to have a small tube inserted into the fallopian tubes, called transcervical sterilization, which irritates the fallopian tubes causing scar tissue to form and close off the tubes. Men commonly get a vasectomy which is an outpatient procedure in which the tube that carries sperm it cut.

Tubal ligation, or getting your “tubes tied,” is a highly effective procedure that will permanently protect against pregnancy, but it’s not reversible, so women need to be certain about never wanting to become pregnant.

The minimally invasive procedure can be done during a C-section or right after a vaginal birth as well as at any other point. Another option is a salpingectomy, a procedure that involves removing one or both fallopian tubes.

Vasectomies are quick, highly effective surgeries in which doctors cut and seal sperm-carrying tubes in the scrotum.

The procedure typically takes 20 minutes and can be performed in an office setting or under conscious sedation, said Dr. Puneet Masson, the director of Male Reproductive Medicine and Surgery and an assistant professor of clinical urology in surgery at Penn Medicine.

While vasectomies can be reversed, patients should consider the procedure to be permanent contraception, Dr. Masson said.

“If you’re looking for a reversible form of contraception, I would move away from both vasectomy and female sterilization,” Dr. Cron of Weill Cornell Medicine/New York-Presbyterian said. “It’s really not meant for somebody that has any doubts about future fertility.”

Condoms are the most popular option for over-the-counter birth control, and don’t require a prescription or doctor’s visit. They can help prevent pregnancy and sexually transmitted infections, but not everyone knows how to use them correctly, said Dr. Melissa Simon, vice chair for research at the department of obstetrics and gynecology at the Northwestern University Feinberg School of Medicine. And condoms fail about 13 percent of the time, according to the Centers for Disease Control and Prevention.

Spermicide, a sperm-killing chemical that comes in gels, foams and the like, is also sold over-the-counter but is not considered effective as other options at preventing pregnancy by itself, said Dr. Monica Woll Rosen, an OB-GYN at University of Michigan Medical School. What about Plan B and emergency contraception? 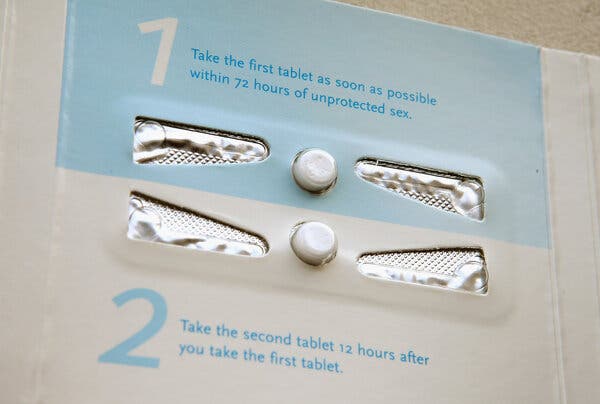 There are two “morning-after pills” available: Plan B, which is available over the counter at drugstores and pharmacies, and Ella, which requires a prescription. Both delay ovulation and allow sperm in the reproductive tract to die out.

These pills may make you nauseous or cause vomiting, and your next period might be shorter than usual after taking them.

What to consider before starting a new form of birth control

Several popular types of birth control, including many of the oral contraceptives, the patch and the ring, contain estrogen, so you’ll see a lot of the same concerns about who can and can’t use them.

Anyone with high blood pressure, a history of blood clots or strokes, some forms of breast cancer or migraine headaches with aura, may be advised to find other methods. Also, anyone who is over 35 and smokes cigarettes may have a higher risk of complications like strokes.

One of the most difficult parts of navigating birth control options can be parsing the literature on weight limits for contraceptives. Although there is conflicting data on how effective hormonal contraceptives are for people above a certain body mass index, or B.M.I., some birth control methods may not be recommended for people who are overweight or those with obesity.

There is also contradictory guidance on whether people who have a certain B.M.I. can or should take emergency contraceptive pills. Clinical trials showed that Plan B and Ella are most effective for women who are under a B.M.I. of 30, Dr. Nippita said. However, the F.D.A. stated in 2016 that it had reviewed the available scientific data on whether emergency contraceptives containing levonorgestrel, like Plan B, were effective in women who weighed over 165 pounds, and concluded that “all women, regardless of how much they weigh, can use these products to prevent unintended pregnancy following unprotected sexual intercourse or contraceptive failure.” Dr. Nippita said that she would not preclude prescribing emergency contraception to a patient based on B.M.I.

Between Medicaid and the Affordable Care Act’s requirements for insurance companies, birth control costs should be covered, said Ms. Gandal-Powers, of the National Women’s Law Center. That means most people should have no out-of-pocket costs, including for doctor’s visits associated with obtaining birth control, such as consultations and implantations for IUDs. But insurance coverage doesn’t always translate into access, she said. “Just because you have coverage doesn’t mean you have a provider near you who can insert an IUD,” she said.