When a cell is damaged, unnecessary, or dangerous to an organism, a cell can initiate the mechanism for cell death known as apoptosis.

When a cell is damaged, superfluous, or potentially dangerous to an organism, a cell can initiate a mechanism to trigger programmed cell death, or apoptosis. Apoptosis allows a cell to die in a controlled manner that prevents the release of potentially damaging molecules from inside the cell.

There are many internal checkpoints that monitor a cell’s health; if abnormalities are observed, a cell can spontaneously initiate the process of apoptosis. However, in some cases such as a viral infection or uncontrolled cell division due to cancer, the cell’s normal checks and balances fail. 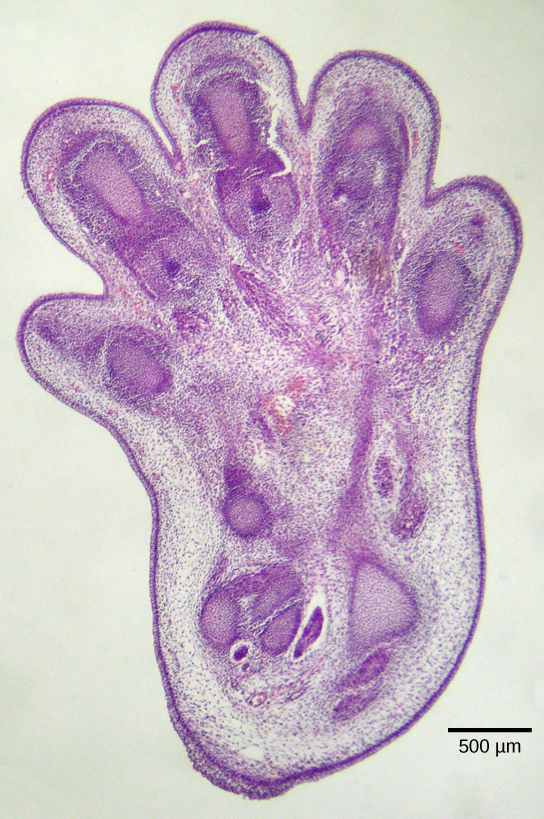 Apoptosis: The histological section of a foot of a 15-day-old mouse embryo, visualized using light microscopy, reveals areas of tissue between the toes which apoptosis will eliminate before the mouse reaches its full gestational age at 27 days.

Another example of external signaling that leads to apoptosis occurs in T-cell development. T-cells are immune cells that bind to foreign macromolecules and particles, targeting them for destruction by the immune system. Normally, T-cells do not target “self” proteins (those of their own organism), a process that can lead to autoimmune diseases. In order to develop the ability to discriminate between self and non-self, immature T-cells undergo screening to determine whether they bind to so-called self proteins. If the T-cell receptor binds to self proteins, the cell initiates apoptosis to remove the potentially dangerous cell.

Apoptosis is also essential for normal embryological development. In vertebrates, for example, early stages of development include the formation of web-like tissue between individual fingers and toes. During the course of normal development, these unnecessary cells must be eliminated, enabling fully separated fingers and toes to form. A cell signaling mechanism triggers apoptosis, which destroys the cells between the developing digits.