Proprioception refers to the sense of knowing how one’s body is positioned in three-dimensional space.

The initiation of proprioception is the activation of a proprioreceptor in the periphery. The proprioceptive sense is believed to be composed of information from sensory neurons located in the inner ear (motion and orientation) and in the stretch receptors located in the muscles and the joint-supporting ligaments (stance).

An unconscious reaction is seen in the human proprioceptive reflex, or Law of Righting. In the event that the body tilts in any direction, the person will cock their head back to level the eyes against the horizon. This is seen even in infants as soon as they gain control of their neck muscles. This control comes from the cerebellum, the part of the brain that affects balance.

Muscle spindles are sensory receptors within the belly of a muscle that primarily detect changes in the length of a muscle. They convey length information to the central nervous system via sensory neurons. This information can be processed by the brain to determine the position of body parts. The responses of muscle spindles to changes in length also play an important role in regulating the contraction of muscles. 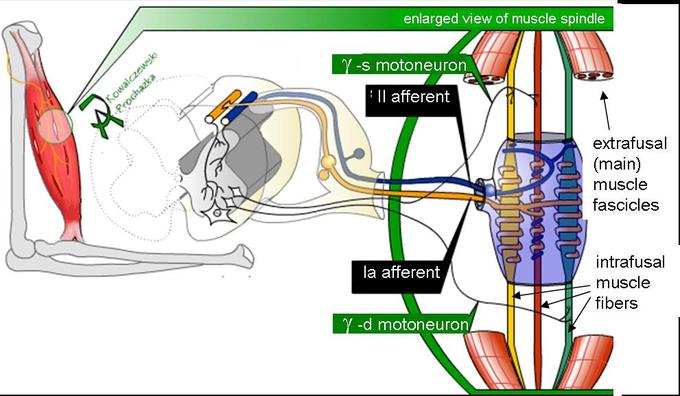 Muscle spindle: Mammalian muscle spindle showing typical position in a muscle (left), neuronal connections in spinal cord (middle), and expanded schematic (right). The spindle is a stretch receptor with its own motor supply consisting of several intrafusal muscle fibers. The sensory endings of a primary (group Ia) afferent and a secondary (group II) afferent coil around the non-contractile central portions of the intrafusal fibers.

The Golgi organ should not be confused with the Golgi apparatus—an organelle in the eukaryotic cell —or the Golgi stain, which is a histologic stain for neuron cell bodies.

Although muscle tension is increasing during the contraction, alpha motor neurons in the spinal cord that supply the muscle are inhibited. However, antagonistic muscles are activated.