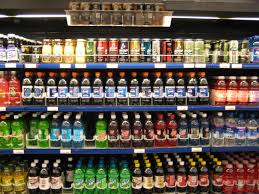 According to the Beverage Marketing Corporation, in the United States in 2010 Americans consumed 29,325 millions of gallons of refreshment beverages including soft drinks, coffee, tea, sports drinks, energy drinks, fruit drinks, and bottled water.Beverage Marketing Corporation. “US Liquid Refreshment Beverage Market Increased by 1.2% in 2010, Beverage Marketing Corporation Reports.” Accessed March 17, 2011. http://www.beveragemarketing.com/?section=pressreleases. As in the past, carbonated soft drinks remained the largest category of consumed beverages. In recent decades total caloric consumption has increased in the United States and is largely attributed to increased consumption of snacks and caloric beverages. People between the ages of nineteen and thirty-nine obtain 10 percent of their total energy intake from soft drinks.The Beverage Panel, University of North Carolina, Chapel Hill. “Beverage Intake in the United States.” Accessed October 2, 2011. http://www.cpc.unc.edu/projects/beverage. (Figure 7.7.2). In all age groups, the consumption of total beverages provides, on average, 21 percent of daily caloric intake. This is 7 percent higher than the IOM acceptable caloric intake from beverages. Moreover, the high intakes of soft drinks and sugary beverages displace the intake of more nutrient-dense beverages, such as low-fat milk.