We previously stated that the covalent bond in the hydrogen molecule (H2) has a certain length (about 7.4 × 10−11 m). Other covalent bonds also have known bond lengths, which are dependent on both the identities of the atoms in the bond and whether the bonds are single, double, or triple bonds. Table \(\PageIndex{1}\) lists the approximate bond lengths for some single covalent bonds. The exact bond length may vary depending on the identity of the molecule but will be close to the value given in the table.

Table \(\PageIndex{2}\) compares the lengths of single covalent bonds with those of double and triple bonds between the same atoms. Without exception, as the number of covalent bonds between two atoms increases, the bond length decreases. With more electrons between the two nuclei, the nuclei can get closer together before the internuclear repulsion is strong enough to balance the attraction.

The distribution of electron density in a polar bond is uneven. It is greater around the atom that attracts the electrons more than the other. For example, the electrons in the H–Cl bond of a hydrogen chloride molecule spend more time near the chlorine atom than near the hydrogen atom. Note that the shaded area around Cl in Figure \(\PageIndex{1b}\) is much larger than it is around H.

This imbalance in electron density results in a buildup of partial negative charge (designated as δ−) on one side of the bond (Cl) and a partial positive charge (designated δ+) on the other side of the bond (H). This is seen in Figure \(\PageIndex{2a}\). The separation of charge in a polar covalent bond results in an electric dipole (two poles), represented by the arrow in Figure \(\PageIndex{2b}\). The direction of the arrow is pointed toward the δ− end while the + tail of the arrow indicates the δ+ end of the bond.

Figure \(\PageIndex{2}\): (a) Unequal sharing of the bonding pair of electrons between H and Cl leads to partial positive charge on the H atom and partial negative charge on the Cl. Symbols δ+ and δ– indicate the polarity of the H–Cl bond. (b) The dipole is represented by an arrow with a cross at the tail. The cross is near the δ+ end and the arrowhead coincides with the δ–.

Any covalent bond between atoms of different elements is a polar bond, but the degree of polarity varies widely. Some bonds between different elements are only minimally polar, while others are strongly polar. Ionic bonds can be considered the ultimate in polarity, with electrons being transferred rather than shared. To judge the relative polarity of a covalent bond, chemists use electronegativity, which is a relative measure of how strongly an atom attracts electrons when it forms a covalent bond. There are various numerical scales for rating electronegativity. Figure \(\PageIndex{3}\) shows one of the most popular—the Pauling scale.

Arguably the most influential chemist of the 20th century, Linus Pauling (1901–94) is the only person to have won two individual (that is, unshared) Nobel Prizes. In the 1930s, Pauling used new mathematical theories to enunciate some fundamental principles of the chemical bond. His 1939 book The Nature of the Chemical Bond is one of the most significant books ever published in chemistry.

By 1935, Pauling’s interest turned to biological molecules, and he was awarded the 1954 Nobel Prize in Chemistry for his work on protein structure. (He was very close to discovering the double helix structure of DNA when James Watson and James Crick announced their own discovery of its structure in 1953.) He was later awarded the 1962 Nobel Peace Prize for his efforts to ban the testing of nuclear weapons. Linus Pauling was one of the most influential chemists of the 20th century.

In his later years, Pauling became convinced that large doses of vitamin C would prevent disease, including the common cold. Most clinical research failed to show a connection, but Pauling continued to take large doses daily. He died in 1994, having spent a lifetime establishing a scientific legacy that few will ever equal.

Describe the electronegativity difference between each pair of atoms and the resulting polarity (or bond type).

Describe the electronegativity (EN) difference between each pair of atoms and the resulting polarity (or bond type).

The EN difference is 1.0 , hence polar. The sharing of electrons between C and O is unequal with the electrons more strongly drawn towards O.

The EN difference is greater than 1.8, hence ionic.

The EN difference is greater than 1.8, hence ionic.

Figure \(\PageIndex{5}\): A molecular dipole results from the unequal distribution of electron density throughout a molecule. 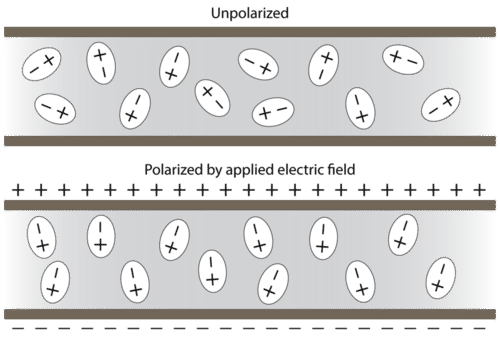 Figure \(\PageIndex{6}\): Polar molecules are randomly oriented in the absence of an applied electric field (top). In an electric field, the molecules orient themselves to maximize the attraction between opposite charges (bottom).

Experimental techniques involving electric fields can be used to determine if a certain substance is composed of polar molecules and to measure the degree of polarity.

For molecules with more than two atoms, the molecular geometry must also be taken into account when determining if the molecule is polar or nonpolar. (Figure \(\PageIndex{7}\)) is a comparison between carbon dioxide and water. Carbon dioxide (CO2) is a linear molecule. The oxygen atoms are more electronegative than the carbon atom, so there are two individual dipoles pointing outward from the C atom to each O atom. However, since the dipoles are of equal strength and are oriented directly opposite each other, they cancel each other out, and the overall molecular polarity of CO2 is zero. CO2 is a nonpolar molecule. In H2O, the orientation of the two O–H bonds is bent: one end of the molecule has a partial positive charge, and the other end has a partial negative charge. In short, the molecule itself is polar. The polarity of water has an enormous impact on its physical and chemical properties. For example, the boiling point of water (100°C) is high for such a small molecule due to the fact that polar molecules attract each other strongly. On the other hand, the nonpolar carbon dioxide becomes a gas at −77°C, almost 200° lower than the temperature at which water boils. More details will be presented in the next section.

Figure \(\PageIndex{7}\) Physical Properties and Polarity. The physical properties of water and carbon dioxide are affected by their polarities.