Solutions are likely to have properties similar to those of their major component—usually the solvent. However, some solution properties differ significantly from those of the solvent. Here, we will focus on liquid solutions that have a solid solute, but many of the effects we will discuss in this section are applicable to all solutions.

Molecular compounds separate into individual molecules when they are dissolved, so for every 1 mol of molecules dissolved, we get 1 mol of particles. In contrast, ionic compounds separate into their constituent ions when they dissolve, so 1 mol of an ionic compound will produce more than 1 mol of dissolved particles. For example, every mole of NaCl that dissolves yields 1 mol of Na+ ions and 1 mol of Cl− ions, for a total of 2 mol of particles in solution. Thus, the effect on a solution’s properties by dissolving NaCl may be twice as large as the effect of dissolving the same amount of moles of glucose (C6H12O6).

The presence of a dissolved solid lowers the characteristic vapor pressure of a liquid so that it evaporates more slowly. (The exceptions to this statement are if the solute itself is a liquid or a gas, in which case the solute will also contribute something to the evaporation process. We will not discuss such solutions here.) This property is called vapor pressure depression and is depicted in Figure \(\PageIndex{1}\). Figure \(\PageIndex{1}\): Vapor Pressure Depression. The presence of solute particles blocks some of the ability for liquid particles to evaporate. Thus, solutions of solid solutes typically have a lower vapor pressure than the pure solvent.

Some people argue that putting a pinch or two of salt in water used to cook spaghetti or other pasta makes a solution that has a higher boiling point, so the pasta cooks faster. In actuality, the amount of solute is so small that the boiling point of the water is practically unchanged. Figure \(\PageIndex{2}\): Comparison of boiling and freezing points of a pure liquid (right side) with a solution (left side).

Both boiling point elevation and freezing point depression have practical uses. For example, solutions of water and ethylene glycol (C2H6O2) are used as coolants in automobile engines because the boiling point of such a solution is greater than 100°C, the normal boiling point of water. In winter, salts like NaCl and \(\ce{CaCl2}\) are sprinkled on the ground to melt ice or keep ice from forming on roads and sidewalks (Figure \(\PageIndex{2}\)). This is because the solution made by dissolving sodium chloride or calcium chloride in water has a lower freezing point than pure water, so the formation of ice is inhibited. Figure \(\PageIndex{2}\): Effect of Freezing Point Depression. The salt sprinkled on this sidewalk makes the water on the sidewalk have a lower freezing point than pure water, so it does not freeze as easily. This makes walking on the sidewalk less hazardous in winter. © Thinkstock

Colligative properties depend on the number of dissolved particles, so the solution with the greater number of particles in solution will show the greatest deviation. When NaCl dissolves, it separates into two ions, Na+ and Cl−. But when \(\ce{CaCl2}\) dissolves, it separates into three ions—one Ca2+ ion and two Cl− ions. Thus, mole for mole, \(\ce{CaCl2}\) will have 50% more impact on freezing point depression than NaCl.

The last colligative property of solutions we will consider is a very important one for biological systems. It involves osmosis, the process by which solvent molecules can pass through certain membranes but solute particles cannot. When two solutions of different concentration are present on either side of these membranes (called semipermeable membranes), there is a tendency for solvent molecules to move from the more dilute solution to the more concentrated solution until the concentrations of the two solutions are equal. This tendency is called osmotic pressure. External pressure can be exerted on a solution to counter the flow of solvent; the pressure required to halt the osmosis of a solvent is equal to the osmotic pressure of the solution.

Osmolarity (osmol) is a way of reporting the total number of particles in a solution to determine osmotic pressure. It is defined as the molarity of a solute times the number of particles a formula unit of the solute makes when it dissolves (represented by \(i\)):

The solvent will flow into the solution of higher osmolarity. The NaCl solute separates into two ions—Na+ and Cl−—when it dissolves, so its osmolarity is as follows:

The Ca(NO3)2 solute separates into three ions—one Ca2+ and two NO3−—when it dissolves, so its osmolarity is as follows:

To Your Health: Dialysis

The main function of the kidneys is to filter the blood to remove wastes and extra water, which are then expelled from the body as urine. Some diseases rob the kidneys of their ability to perform this function, causing a buildup of waste materials in the bloodstream. If a kidney transplant is not available or desirable, a procedure called dialysis can be used to remove waste materials and excess water from the blood.

In one form of dialysis, called hemodialysis, a patient’s blood is passed though a length of tubing that travels through an artificial kidney machine (also called a dialysis machine). A section of tubing composed of a semipermeable membrane is immersed in a solution of sterile water, glucose, amino acids, and certain electrolytes. The osmotic pressure of the blood forces waste molecules and excess water through the membrane into the sterile solution. Red and white blood cells are too large to pass through the membrane, so they remain in the blood. After being cleansed in this way, the blood is returned to the body. 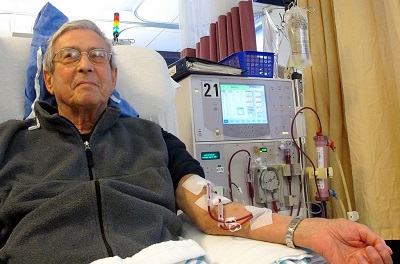 Figure \(\PageIndex{3}\): A patient undergoing hemodialysis depends on osmosis to cleanse the blood of waste products that the kidneys are incapable of removing due to disease. from Wikipedia.

Dialysis is a continuous process, as the osmosis of waste materials and excess water takes time. Typically, 5–10 lb of waste-containing fluid is removed in each dialysis session, which can last 2–8 hours and must be performed several times a week. Although some patients have been on dialysis for 30 or more years, dialysis is always a temporary solution because waste materials are constantly building up in the bloodstream. A more permanent solution is a kidney transplant.

Cell walls are semipermeable membranes, so the osmotic pressures of the body’s fluids have important biological consequences. If solutions of different osmolarity exist on either side of the cells, solvent (water) may pass into or out of the cells, sometimes with disastrous results. Consider what happens if red blood cells are placed in a hypotonic solution, meaning a solution of lower osmolarity than the liquid inside the cells. The cells swell up as water enters them, disrupting cellular activity and eventually causing the cells to burst. This process is called hemolysis. If red blood cells are placed in a hypertonic solution, meaning one having a higher osmolarity than exists inside the cells, water leaves the cells to dilute the external solution, and the red blood cells shrivel and die. This process is called crenation. Only if red blood cells are placed in isotonic solutions that have the same osmolarity as exists inside the cells are they unaffected by negative effects of osmotic pressure. Glucose solutions of about 0.31 M, or sodium chloride solutions of about 0.16 M, are isotonic with blood plasma.

The concentration of an isotonic sodium chloride (NaCl) solution is only half that of an isotonic glucose (C6H12O6) solution because NaCl produces two ions when a formula unit dissolves, while molecular C6H12O6 produces only one particle when a formula unit dissolves. The osmolarities are therefore the same even though the concentrations of the two solutions are different.

Osmotic pressure explains why you should not drink seawater if you are abandoned in a life raft in the middle of the ocean. Its osmolarity is about three times higher than most bodily fluids. You would actually become thirstier as water from your cells was drawn out to dilute the salty ocean water you ingested. Our bodies do a better job coping with hypotonic solutions than with hypertonic ones. The excess water is collected by our kidneys and excreted.

Osmotic pressure effects are used in the food industry to make pickles from cucumbers and other vegetables and in brining meat to make corned beef. It is also a factor in the mechanism of getting water from the roots to the tops of trees!

A perfusionist is a medical technician trained to assist during any medical procedure in which a patient’s circulatory or breathing functions require support. The use of perfusionists has grown rapidly since the advent of open-heart surgery in 1953.

Most perfusionists work in operating rooms, where their main responsibility is to operate heart-lung machines. During many heart surgeries, the heart itself must be stopped. In these situations, a heart-lung machine keeps the patient alive by aerating the blood with oxygen and removing carbon dioxide. The perfusionist monitors both the machine and the status of the blood, notifying the surgeon and the anesthetist of any concerns and taking corrective action if the status of the blood becomes abnormal.

Despite the narrow parameters of their specialty, perfusionists must be highly trained. Certified perfusion education programs require a student to learn anatomy, physiology, pathology, chemistry, pharmacology, math, and physics. A college degree is usually required. Some perfusionists work with other external artificial organs, such as hemodialysis machines and artificial livers.