In the United States, 17.9 million people have been diagnosed with diabetes, and experts estimate that at least another 5.7 million people have the disease but have not been diagnosed. In 2006, diabetes was the seventh leading cause of death, listed on 72,507 death certificates. Moreover, it was a contributing factor in over 200,000 deaths in which the cause was listed as something else, such as heart or kidney disease.

People with diabetes are impaired in their ability to metabolize glucose, a sugar needed by the body for energy; as a result, excessive quantities of glucose accumulate in the blood and the urine. The characteristic symptoms of diabetes are weight loss, constant hunger, extreme thirst, and frequent urination (the kidneys excrete large amounts of water in an attempt to remove the excess sugar from the blood).

An important diagnostic test for diabetes is the oral glucose tolerance test, which measures the level of glucose in blood plasma. A first measurement is made after a fast of at least 8 h, followed by another measurement 2 h after the person drinks a flavored solution of 75 g of glucose dissolved in water. At the second measurement, the glucose plasma level should be no higher than 139 mg/dL. Individuals with a value between 140 and 199 mg/dL are diagnosed with prediabetes, while those with a value of 200 mg/dL or above are diagnosed with diabetes. Following a diagnosis of diabetes a person will need to monitor his or her blood glucose levels daily (or more often) using a glucose meter. 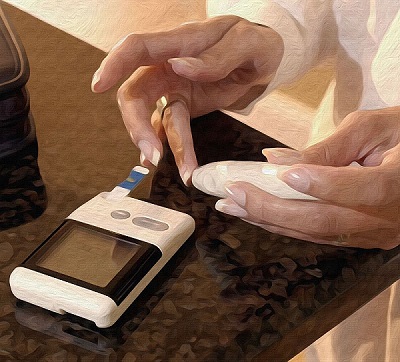