Each of the thousands of naturally occurring proteins has its own characteristic amino acid composition and sequence that result in a unique three-dimensional shape. Since the 1950s, scientists have determined the amino acid sequences and three-dimensional conformation of numerous proteins and thus obtained important clues on how each protein performs its specific function in the body.

Proteins are compounds of high molar mass consisting largely or entirely of chains of amino acids. Because of their great complexity, protein molecules cannot be classified on the basis of specific structural similarities, as carbohydrates and lipids are categorized. The two major structural classifications of proteins are based on far more general qualities: whether the protein is (1) fiberlike and insoluble or (2) globular and soluble. Some proteins, such as those that compose hair, skin, muscles, and connective tissue, are fiberlike. These fibrous proteins are insoluble in water and usually serve structural, connective, and protective functions. Examples of fibrous proteins are keratins, collagens, myosins, and elastins. Hair and the outer layer of skin are composed of keratin. Connective tissues contain collagen. Myosins are muscle proteins and are capable of contraction and extension. Elastins are found in ligaments and the elastic tissue of artery walls.

Globular proteins, the other major class, are soluble in aqueous media. In these proteins, the chains are folded so that the molecule as a whole is roughly spherical. Familiar examples include egg albumin from egg whites and serum albumin in blood. Serum albumin plays a major role in transporting fatty acids and maintaining a proper balance of osmotic pressures in the body. Hemoglobin and myoglobin, which are important for binding oxygen, are also globular proteins.

The structure of proteins is generally described as having four organizational levels. The first of these is the primary structure, which is the number and sequence of amino acids in a protein’s polypeptide chain or chains, beginning with the free amino group and maintained by the peptide bonds connecting each amino acid to the next. The primary structure of insulin, composed of 51 amino acids, is shown in Figure \(\PageIndex{1}\). Figure \(\PageIndex{1}\): Primary Structure of Human Insulin. Human insulin, whose amino acid sequence is shown here, is a hormone that is required for the proper metabolism of glucose.

A protein molecule is not a random tangle of polypeptide chains. Instead, the chains are arranged in unique but specific conformations. The term secondary structure refers to the fixed arrangement of the polypeptide backbone. On the basis of X ray studies, Linus Pauling and Robert Corey postulated that certain proteins or portions of proteins twist into a spiral or a helix. This helix is stabilized by intrachain hydrogen bonding between the carbonyl oxygen atom of one amino acid and the amide hydrogen atom four amino acids up the chain (located on the next turn of the helix) and is known as a right-handed α-helix. X ray data indicate that this helix makes one turn for every 3.6 amino acids, and the side chains of these amino acids project outward from the coiled backbone (Figure \(\PageIndex{2}\)). The α-keratins, found in hair and wool, are exclusively α-helical in conformation. Some proteins, such as gamma globulin, chymotrypsin, and cytochrome c, have little or no helical structure. Others, such as hemoglobin and myoglobin, are helical in certain regions but not in others. 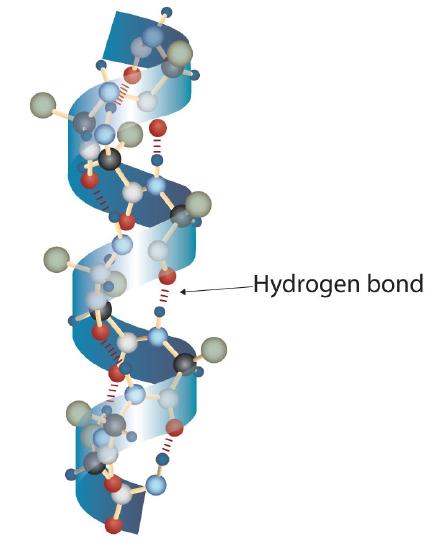 Figure \(\PageIndex{2}\) A Ball-and-Stick Model of an α-Helix. This ball-and-stick model shows the intrachain hydrogen bonding between carbonyl oxygen atoms and amide hydrogen atoms. Each turn of the helix spans 3.6 amino acids. Note that the side chains (represented as green spheres) point out from the helix.

Another common type of secondary structure, called the β-pleated sheet conformation, is a sheetlike arrangement in which two or more extended polypeptide chains (or separate regions on the same chain) are aligned side by side. The aligned segments can run either parallel or antiparallel—that is, the N-terminals can face in the same direction on adjacent chains or in different directions—and are connected by interchain hydrogen bonding (Figure \(\PageIndex{3}\)). The β-pleated sheet is particularly important in structural proteins, such as silk fibroin. It is also seen in portions of many enzymes, such as carboxypeptidase A and lysozyme. Figure \(\PageIndex{3}\): A Ball-and-Stick Model of the β-Pleated Sheet Structure in Proteins. The side chains extend above or below the sheet and alternate along the chain. The protein chains are held together by interchain hydrogen bonding. Figure \(\PageIndex{4}\): A Ribbon Model of the Three-Dimensional Structure of Insulin. The spiral regions represent sections of the polypeptide chain that have an α-helical structure, while the broad arrows represent β-pleated sheet structures.

Four major types of attractive interactions determine the shape and stability of the tertiary structure of proteins. You studied several of them previously. Figure \(\PageIndex{6}\) The Quaternary Structure of Hemoglobin. Hemoglobin is a protein that transports oxygen throughout the body.

The highly organized structures of proteins are truly masterworks of chemical architecture. But highly organized structures tend to have a certain delicacy, and this is true of proteins. Denaturation is the term used for any change in the three-dimensional structure of a protein that renders it incapable of performing its assigned function. A denatured protein cannot do its job. (Sometimes denaturation is equated with the precipitation or coagulation of a protein; our definition is a bit broader.) A wide variety of reagents and conditions, such as heat, organic compounds, pH changes, and heavy metal ions can cause protein denaturation (Figure \(\PageIndex{1}\)).

Anyone who has fried an egg has observed denaturation. The clear egg white turns opaque as the albumin denatures and coagulates. No one has yet reversed that process. However, given the proper circumstances and enough time, a protein that has unfolded under sufficiently gentle conditions can refold and may again exhibit biological activity (Figure \(\PageIndex{8}\)). Such evidence suggests that, at least for these proteins, the primary structure determines the secondary and tertiary structure. A given sequence of amino acids seems to adopt its particular three-dimensional arrangement naturally if conditions are right. Figure \(\PageIndex{8}\): Denaturation and Renaturation of a Protein. The denaturation (unfolding) and renaturation (refolding) of a protein is depicted. The red boxes represent stabilizing interactions, such as disulfide linkages, hydrogen bonding, and/or ionic bonds.

The primary structures of proteins are quite sturdy. In general, fairly vigorous conditions are needed to hydrolyze peptide bonds. At the secondary through quaternary levels, however, proteins are quite vulnerable to attack, though they vary in their vulnerability to denaturation. The delicately folded globular proteins are much easier to denature than are the tough, fibrous proteins of hair and skin.

Proteins can be divided into two categories: fibrous, which tend to be insoluble in water, and globular, which are more soluble in water. A protein may have up to four levels of structure. The primary structure consists of the specific amino acid sequence. The resulting peptide chain can form an α-helix or β-pleated sheet (or local structures not as easily categorized), which is known as secondary structure. These segments of secondary structure are incorporated into the tertiary structure of the folded polypeptide chain. The quaternary structure describes the arrangements of subunits in a protein that contains more than one subunit. Four major types of attractive interactions determine the shape and stability of the folded protein: ionic bonding, hydrogen bonding, disulfide linkages, and dispersion forces. A wide variety of reagents and conditions can cause a protein to unfold or denature.