New cells are continuously forming in the body through the process of cell division. For this to happen, the DNA in a dividing cell must be copied in a process known as replication. The complementary base pairing of the double helix provides a ready model for how genetic replication occurs. If the two chains of the double helix are pulled apart, disrupting the hydrogen bonding between base pairs, each chain can act as a template, or pattern, for the synthesis of a new complementary DNA chain.

The nucleus contains all the necessary enzymes, proteins, and nucleotides required for this synthesis. A short segment of DNA is “unzipped,” so that the two strands in the segment are separated to serve as templates for new DNA. DNA polymerase, an enzyme, recognizes each base in a template strand and matches it to the complementary base in a free nucleotide. The enzyme then catalyzes the formation of an ester bond between the 5′ phosphate group of the nucleotide and the 3′ OH end of the new, growing DNA chain. In this way, each strand of the original DNA molecule is used to produce a duplicate of its former partner (Figure \(\PageIndex{1}\)). Whatever information was encoded in the original DNA double helix is now contained in each replicate helix. When the cell divides, each daughter cell gets one of these replicates and thus all of the information that was originally possessed by the parent cell.

Figure \(\PageIndex{1}\): A Schematic Diagram of DNA Replication. DNA replication occurs by the sequential unzipping of segments of the double helix. Each new nucleotide is brought into position by DNA polymerase and is added to the growing strand by the formation of a phosphate ester bond. Thus, two double helixes form from one, and each consists of one old strand and one new strand, an outcome called semiconservative replications. (This representation is simplified; many more proteins are involved in replication.)

A segment of one strand from a DNA molecule has the sequence 5′‑TCCATGAGTTGA‑3′. What is the sequence of nucleotides in the opposite, or complementary, DNA chain?

Knowing that the two strands are antiparallel and that T base pairs with A, while C base pairs with G, the sequence of the complementary strand will be 3′‑AGGTACTCAACT‑5′ (can also be written as TCAACTCATGGA).

A segment of one strand from a DNA molecule has the sequence 5′‑CCAGTGAATTGCCTAT‑3′. What is the sequence of nucleotides in the opposite, or complementary, DNA chain?

What do we mean when we say information is encoded in the DNA molecule? An organism’s DNA can be compared to a book containing directions for assembling a model airplane or for knitting a sweater. Letters of the alphabet are arranged into words, and these words direct the individual to perform certain operations with specific materials. If all the directions are followed correctly, a model airplane or sweater is produced.

In DNA, the particular sequences of nucleotides along the chains encode the directions for building an organism. Just as saw means one thing in English and was means another, the sequence of bases CGT means one thing, and TGC means something different. Although there are only four letters—the four nucleotides—in the genetic code of DNA, their sequencing along the DNA strands can vary so widely that information storage is essentially unlimited.

For the hereditary information in DNA to be useful, it must be “expressed,” that is, used to direct the growth and functioning of an organism. The first step in the processes that constitute DNA expression is the synthesis of RNA, by a template mechanism that is in many ways analogous to DNA replication. Because the RNA that is synthesized is a complementary copy of information contained in DNA, RNA synthesis is referred to as transcription. There are three key differences between replication and transcription:

The DNA sequence that is transcribed to make RNA is called the template strand, while the complementary sequence on the other DNA strand is called the coding or informational strand. To initiate RNA synthesis, the two DNA strands unwind at specific sites along the DNA molecule. Ribonucleotides are attracted to the uncoiling region of the DNA molecule, beginning at the 3′ end of the template strand, according to the rules of base pairing. Thymine in DNA calls for adenine in RNA, cytosine specifies guanine, guanine calls for cytosine, and adenine requires uracil. RNA polymerase—an enzyme—binds the complementary ribonucleotide and catalyzes the formation of the ester linkage between ribonucleotides, a reaction very similar to that catalyzed by DNA polymerase (Figure \(\PageIndex{2}\)). Synthesis of the RNA strand takes place in the 5′ to 3′ direction, antiparallel to the template strand. Only a short segment of the RNA molecule is hydrogen-bonded to the template strand at any time during transcription. When transcription is completed, the RNA is released, and the DNA helix reforms. The nucleotide sequence of the RNA strand formed during transcription is identical to that of the corresponding coding strand of the DNA, except that U replaces T. Figure \(\PageIndex{2}\): A Schematic Diagram of RNA Transcription from a DNA Template. The representation of RNA polymerase is proportionately much smaller than the actual molecule, which encompasses about 50 nucleotides at a time.

A portion of the template strand of a gene has the sequence 5′‑TCCATGAGTTGA‑3′. What is the sequence of nucleotides in the RNA that is formed from this template?

Four things must be remembered in answering this question: (1) the DNA strand and the RNA strand being synthesized are antiparallel; (2) RNA is synthesized in a 5′ to 3′ direction, so transcription begins at the 3′ end of the template strand; (3) ribonucleotides are used in place of deoxyribonucleotides; and (4) thymine (T) base pairs with adenine (A), A base pairs with uracil (U; in RNA), and cytosine (C) base pairs with guanine (G). The sequence is determined to be 3′‑AGGUACUCAACU‑5′ (can also be written as 5′‑UCAACUCAUGGA‑3′).

A portion of the template strand of a gene has the sequence 5′‑CCAGTGAATTGCCTAT‑3′. What is the sequence of nucleotides in the RNA that is formed from this template?

Three types of RNA are formed during transcription: messenger RNA (mRNA), ribosomal RNA (rRNA), and transfer RNA (tRNA). These three types of RNA differ in function, size, and percentage of the total cell RNA (Table \(\PageIndex{1}\)). mRNA makes up only a small percent of the total amount of RNA within the cell, primarily because each molecule of mRNA exists for a relatively short time; it is continuously being degraded and resynthesized. The molecular dimensions of the mRNA molecule vary according to the amount of genetic information a given molecule contains. After transcription, which takes place in the nucleus, the mRNA passes into the cytoplasm, carrying the genetic message from DNA to the ribosomes, the sites of protein synthesis. Elsewhere, we shall see how mRNA directly determines the sequence of amino acids during protein synthesis.

Ribosomes are cellular substructures where proteins are synthesized. They contain about 65% rRNA and 35% protein, held together by numerous noncovalent interactions, such as hydrogen bonding, in an overall structure consisting of two globular particles of unequal size.

Molecules of tRNA, which bring amino acids (one at a time) to the ribosomes for the construction of proteins, differ from one another in the kinds of amino acid each is specifically designed to carry. A set of three nucleotides, known as a codon, on the mRNA determines which kind of tRNA will add its amino acid to the growing chain. Each of the 20 amino acids found in proteins has at least one corresponding kind of tRNA, and most amino acids have more than one. 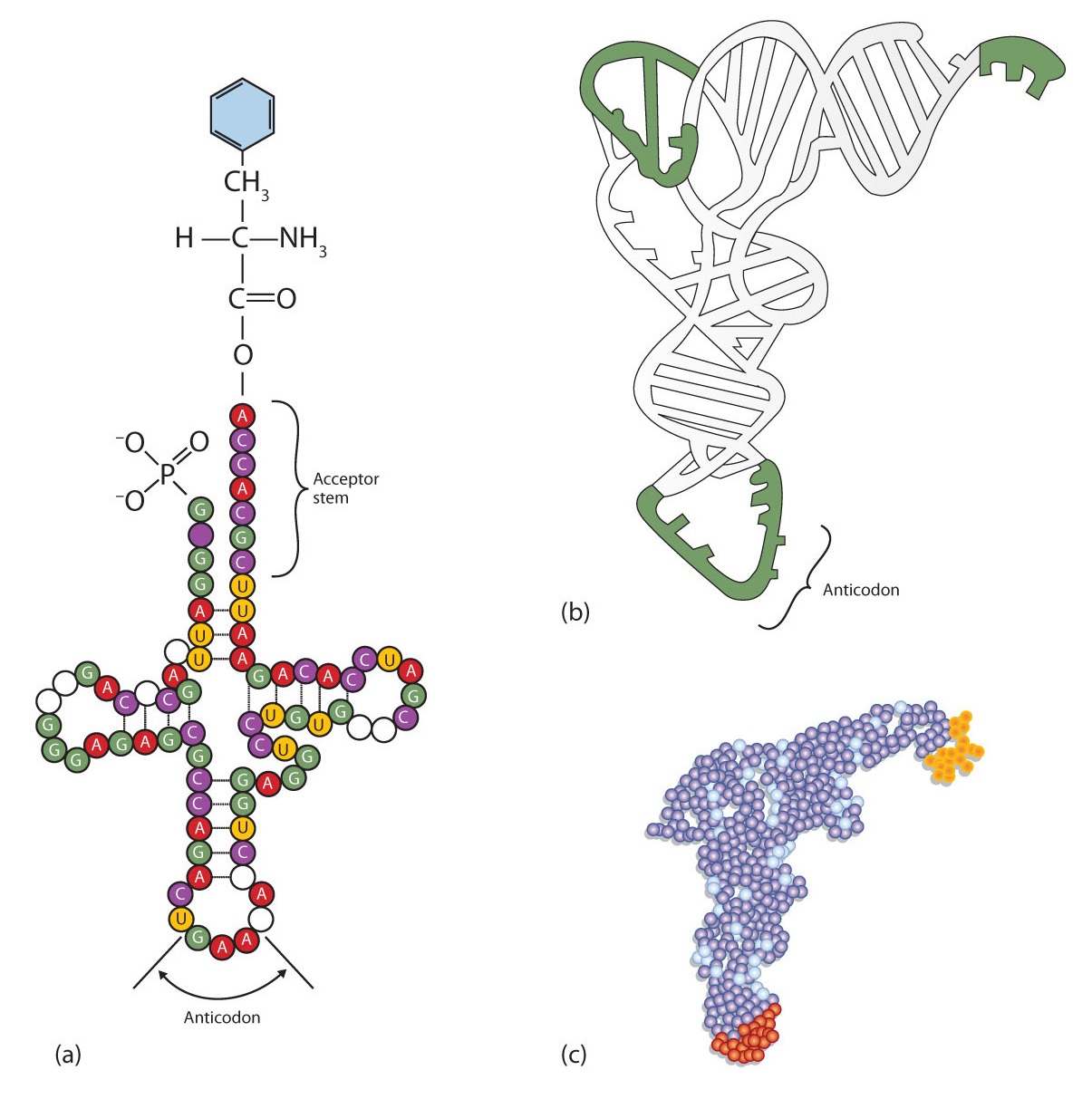 Figure \(\PageIndex{3}\): Transfer RNA. (a) In the two-dimensional structure of a yeast tRNA molecule for phenylalanine, the amino acid binds to the acceptor stem located at the 3′ end of the tRNA primary sequence. (The nucleotides that are not specifically identified here are slightly altered analogs of the four common ribonucleotides A, U, C, and G.) (b) In the three-dimensional structure of yeast phenylalanine tRNA, note that the anticodon loop is at the bottom and the acceptor stem is at the top right. (c) This shows a space-filling model of the tRNA.

The two-dimensional structure of a tRNA molecule has three distinctive loops, reminiscent of a cloverleaf (Figure \(\PageIndex{3}\)). On one loop is a sequence of three nucleotides that varies for each kind of tRNA. This triplet, called the anticodon, is complementary to and pairs with the codon on the mRNA. At the opposite end of the molecule is the acceptor stem, where the amino acid is attached.