A metabolic pathway is a series of biochemical reactions by which an organism converts a given reactant to a specific end product. There are specific metabolic pathways—which are different for carbohydrates, triglycerides, and proteins—that break down the products of stage I of catabolism (monosaccharides, fatty acids, and amino acids) to produce a common end product, acetyl-coenzyme A (acetyl-CoA) in stage II of catabolism.

Figure \(\PageIndex{1}\): The Structure of Acetyl-Coenzyme A (Acetyl-CoA)

Acetyl-CoA is shown in Figure \(\PageIndex{1}\). The acetyl unit, derived (as we will see) from the breakdown of carbohydrates, lipids, and proteins, is attached to coenzyme A, making the acetyl unit more reactive. Acetyl-CoA is used in a myriad of biochemical pathways. For example, it may be used as the starting material for the biosynthesis of lipids (such as triglycerides, phospholipids, or cholesterol and other steroids). Most importantly for energy generation, it may enter the citric acid cycle and be oxidized to produce energy, if energy is needed and oxygen is available. The various fates or uses of acetyl-CoA are summarized in Figure \(\PageIndex{1}\).

Glycolysis is the catabolic process in which glucose is converted into pyruvate via ten enzymatic steps. There are three regulatory steps, each of which is highly regulated that are separated into two phases:

The end result of Glycolysis is two new pyruvate molecules which can then be fed into the Citric Acid cycle (also known as the Kreb's Cycle) if oxygen is present, or can be reduced to lactate or ethanol in the absence of of oxygen using a process known as fermentation.

Video \(\PageIndex{1}\): Glycolysis: An Overview. Glycolysis is a series of 10 reactions that converts sugars, like glucose, into 3-carbon molecules called pyruvate. This animation provides an overview of the energy consumed and produced by the pathway. NDSU VCell Production's animation; for more information please see Vcell, NDSU(opens in new window) [vcell.ndsu.edu].

Glycolysis occurs within almost all living cells and is the primary source of Acetyl-CoA, which is the molecule responsible for the majority of energy output under aerobic conditions. The structures of Glycolysis intermediates can be found in Figure \(\PageIndex{3}\).

The first phase of Glycolysis requires an input of energy in the form of ATP (adenosine triphosphate).

The second phase of Glycolysis where 4 molecules of ATP are produced per molecule of glucose. Enzymes appear in red:

Because Glucose is split to yield two molecules of D-Glyceraldehyde-3-phosphate, each step in the "Pay Off" phase occurs twice per molecule of glucose.

The best source of energy for eukaryotic organisms are fats. Glucose offers a ratio 6.3 moles of ATP per carbon while saturated fatty acids offer 8.1 ATP per carbon. Also the complete oxidation of fats yields enormous amounts of water for those organisms that do not have adequate access to drinkable water. Camels and killer whales are good example of this, they obtain their water requirements from the complete oxidation of fats.

There are four distinct stages in the oxidation of fatty acids. Fatty acid degradation takes place within the mitochondria and requires the help of several different enzymes. In order for fatty acids to enter the mitochondria the assistance of two carrier proteins is required, Carnitine acyltransferase I and II. It is also interesting to note the similarities between the four steps of beta-oxidation and the later four steps of the TCA cycle.

Most fats stored in eukaryotic organisms are stored as triglycerides as seen below. In order to enter into beta-oxidation bonds must be broken usually with the use of a Lipase. The end result of these broken bonds are a glycerol molecule and three fatty acids in the case of triglycerides. Other lipids are capable of being degraded as well. 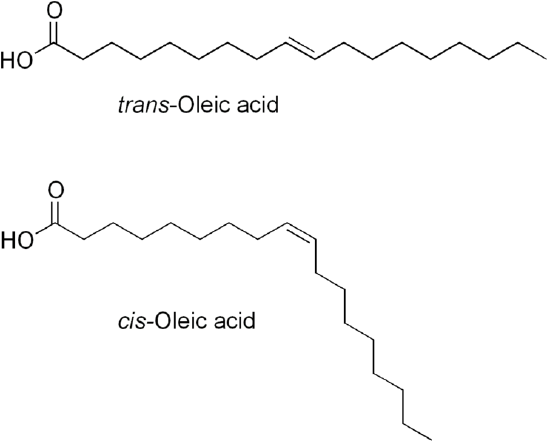 A fatty acyl-CoA is oxidized by Acyl-CoA dehydrogenase to yield a trans alkene. This is done with the aid of an [FAD] prosthetic group.

The alcohol of the hydroxyacly-CoA is then oxidized by NAD+ to a carbonyl with the help of Hydroxyacyl-CoA dehydrogenase. NAD+ is used to oxidize the alcohol rather then [FAD] because NAD+ is capable of the alcohol while [FAD] is not.

Finally acetyl-CoA is cleaved off with the help of Thiolase to yield an Acyl-CoA that is two carbons shorter than before. The cleaved acetyl-CoA can then enter into the TCA and ETC because it is already within the mitochondria.

Acetyl-CoA is formed from the breakdown of carbohydrates, lipids, and proteins. It is used in many biochemical pathways.