The acetyl group enters a cyclic sequence of reactions known collectively as the citric acid cycle (or Krebs cycle or tricarboxylic acid [TCA] cycle). The cyclical design of this complex series of reactions, which bring about the oxidation of the acetyl group of acetyl-CoA to carbon dioxide and water, was first proposed by Hans Krebs in 1937. (He was awarded the 1953 Nobel Prize in Physiology or Medicine.) Acetyl-CoA’s entrance into the citric acid cycle is the beginning of stage III of catabolism. The citric acid cycle produces adenosine triphosphate (ATP), reduced nicotinamide adenine dinucleotide (NADH), reduced flavin adenine dinucleotide (FADH2), and metabolic intermediates for the synthesis of needed compounds.

Steps of the Citric Acid Cycle

At first glance, the citric acid cycle appears rather complex (Figure \(\PageIndex{1}\)). All the reactions, however, are familiar types in organic chemistry: hydration, oxidation, decarboxylation, and hydrolysis. Each reaction of the citric acid cycle is numbered, and in Figure \(\PageIndex{1}\), the two acetyl carbon atoms are highlighted in red. Each intermediate in the cycle is a carboxylic acid, existing as an anion at physiological pH. All the reactions occur within the mitochondria, which are small organelles within the cells of plants and animals. In the fifth reaction, the energy released by the hydrolysis of the high-energy thioester bond of succinyl-CoA is used to form guanosine triphosphate (GTP) from guanosine diphosphate (GDP) and inorganic phosphate in a reaction catalyzed by succinyl-CoA synthetase. This step is the only reaction in the citric acid cycle that directly forms a high-energy phosphate compound. GTP can readily transfer its terminal phosphate group to adenosine diphosphate (ADP) to generate ATP in the presence of nucleoside diphosphokinase.

Succinate dehydrogenase then catalyzes the removal of two hydrogen atoms from succinate, forming fumarate. This oxidation-reduction reaction uses flavin adenine dinucleotide (FAD), rather than NAD+, as the oxidizing agent. Succinate dehydrogenase is the only enzyme of the citric acid cycle located within the inner mitochondrial membrane. We will see soon the importance of this.

In the following step, a molecule of water is added to the double bond of fumarate to form L-malate in a reaction catalyzed by fumarase.

One revolution of the cycle is completed with the oxidation of L-malate to oxaloacetate, brought about by malate dehydrogenase. This is the third oxidation-reduction reaction that uses NAD+ as the oxidizing agent. Oxaloacetate can accept an acetyl group from acetyl-CoA, allowing the cycle to begin again.

Video: "The Citric Acid Cycle: An Overview". In the matrix of the mitochondrion, the Citric Acid Cycle uses Acetyl CoA molecules to produce energy through eight chemical reactions. This animation provides an overview of the pathway and its products. NDSU VCell Production's animation; for more information please see http://vcell.ndsu.edu/animations.

All the enzymes and coenzymes for the citric acid cycle, the reoxidation of NADH and FADH2, and the production of ATP are located in the mitochondria, which are small, oval organelles with double membranes, often referred to as the “power plants” of the cell (Figure \(\PageIndex{2}\)). A cell may contain 100–5,000 mitochondria, depending on its function, and the mitochondria can reproduce themselves if the energy requirements of the cell increase. 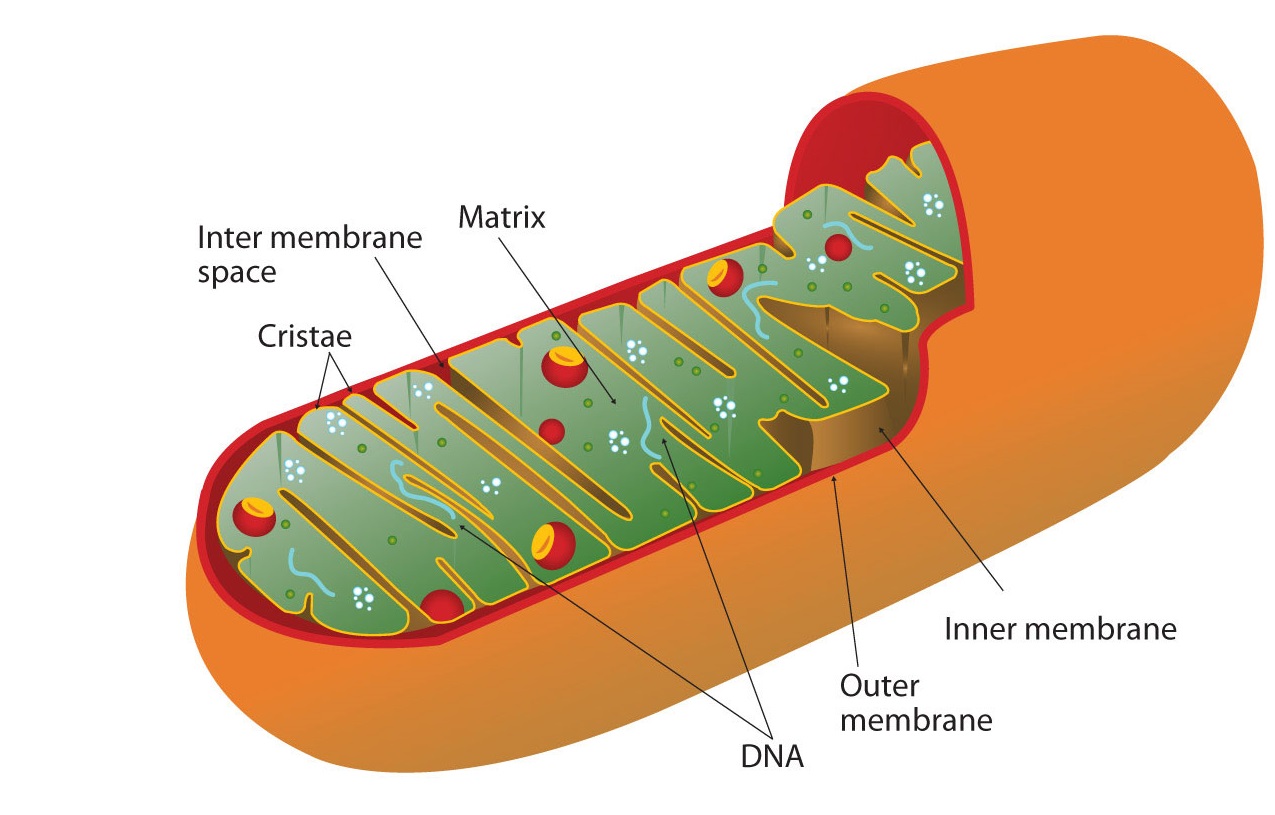 Cellular respiration occurs in the mitochondria

Figure \(\PageIndex{2}\) shows the mitochondrion’s two membranes: outer and inner. The inner membrane is extensively folded into a series of internal ridges called cristae. Thus there are two compartments in mitochondria: the intermembrane space, which lies between the membranes, and the matrix, which lies inside the inner membrane. The outer membrane is permeable, whereas the inner membrane is impermeable to most molecules and ions, although water, oxygen, and carbon dioxide can freely penetrate both membranes. The matrix contains all the enzymes of the citric acid cycle with the exception of succinate dehydrogenase, which is embedded in the inner membrane. The enzymes that are needed for the reoxidation of NADH and FADH2 and ATP production are also located in the inner membrane. They are arranged in specific positions so that they function in a manner analogous to a bucket brigade. This highly organized sequence of oxidation-reduction enzymes is known as the electron transport chain (or respiratory chain).

Figure \(\PageIndex{3}\) illustrates the organization of the electron transport chain. The components of the chain are organized into four complexes designated I, II, III, and IV. Each complex contains several enzymes, other proteins, and metal ions. The metal ions can be reduced and then oxidized repeatedly as electrons are passed from one component to the next. Recall that a compound is reduced when it gains electrons or hydrogen atoms and is oxidized when it loses electrons or hydrogen atoms. Electrons can enter the electron transport chain through either complex I or II. We will look first at electrons entering at complex I. These electrons come from NADH, which is formed in three reactions of the citric acid cycle. Let’s use step 8 as an example, the reaction in which L-malate is oxidized to oxaloacetate and NAD+ is reduced to NADH. This reaction can be divided into two half reactions:

In the oxidation half-reaction, two hydrogen (H+) ions and two electrons are removed from the substrate. In the reduction half-reaction, the NAD+ molecule accepts both of those electrons and one of the H+ ions. The other H+ ion is transported from the matrix, across the inner mitochondrial membrane, and into the intermembrane space. The NADH diffuses through the matrix and is bound by complex I of the electron transport chain. In the complex, the coenzyme flavin mononucleotide (FMN) accepts both electrons from NADH. By passing the electrons along, NADH is oxidized back to NAD+ and FMN is reduced to FMNH2 (reduced form of flavin mononucleotide). Again, the reaction can be illustrated by dividing it into its respective half-reactions.

Complex I contains several proteins that have iron-sulfur (Fe·S) centers. The electrons that reduced FMN to FMNH2 are now transferred to these proteins. The iron ions in the Fe·S centers are in the Fe(III) form at first, but by accepting an electron, each ion is reduced to the Fe(II) form. Because each Fe·S center can transfer only one electron, two centers are needed to accept the two electrons that will regenerate FMN.

Electrons from complexes I and II are then transferred from the \(\ce{Fe \cdot S}\) protein to coenzyme Q (CoQ), a mobile electron carrier that acts as the electron shuttle between complexes I or II and complex III.

Coenzyme Q is also called ubiquinone because it is ubiquitous in living systems.

Complexes III and IV include several iron-containing proteins known as cytochromes. The iron in these enzymes is located in substructures known as iron porphyrins (Figure \(\PageIndex{4}\)). Like the Fe·S centers, the characteristic feature of the cytochromes is the ability of their iron atoms to exist as either Fe(II) or Fe(III). Thus, each cytochrome in its oxidized form—Fe(III)—can accept one electron and be reduced to the Fe(II) form. This change in oxidation state is reversible, so the reduced form can donate its electron to the next cytochrome, and so on. Complex III contains cytochromes b and c, as well as Fe·S proteins, with cytochrome c acting as the electron shuttle between complex III and IV. Complex IV contains cytochromes a and a3 in an enzyme known as cytochrome oxidase. This enzyme has the ability to transfer electrons to molecular oxygen, the last electron acceptor in the chain of electron transport reactions. In this final step, water (H2O) is formed. Figure \(\PageIndex{4}\): An Iron Porphyrin. Iron porphyrins are present in cytochromes as well as in myoglobin and hemoglobin.

Electron transport is tightly coupled to oxidative phosphorylation. The coenzymes NADH and FADH2 are oxidized by the respiratory chain only if ADP is simultaneously phosphorylated to ATP. The currently accepted model explaining how these two processes are linked is known as the chemiosmotic hypothesis, which was proposed by Peter Mitchell, resulting in Mitchell being awarded the 1978 Nobel Prize in Chemistry.

In cells that are using energy, the turnover of ATP is very high, so these cells contain high levels of ADP. They must therefore consume large quantities of oxygen continuously, so as to have the energy necessary to phosphorylate ADP to form ATP. Consider, for example, that resting skeletal muscles use about 30% of a resting adult’s oxygen consumption, but when the same muscles are working strenuously, they account for almost 90% of the total oxygen consumption of the organism.