Alternative sweeteners are simply alternatives to sucrose and other mono- and disaccharides that provide sweetness. Many have been developed to provide zero-calorie or low calorie sweetening for foods and drinks.

Saccharin is the oldest of the artificial sweeteners. You do not want to use it in cooking or baking because it develops a bitter taste4. Aspartame is made up of 2 amino acids (phenylalanine and aspartate) and a methyl (CH3) group. The compound is broken down during digestion into the individual amino acids. This is why it provides 4 kcal/g, just like protein4. Because it can be broken down to phenylalanine, products that contain aspartame contain the following message: "Phenylketonurics: Contains phenylalanine." Phenylketonuria (PKU) will be covered in greater detail in section 2.25. When heated, aspartame breaks down and loses its sweet flavor1. Neotame is like aspartame version 2.0. Neotame is structurally identical to aspartame except that it contains an additional side group (bottom of figure below, which is flipped backwards to make it easier to compare their structures). While this looks like a minor difference, it has profound effects on the properties of neotame. Neotame is much sweeter than aspartame and is heat-stable. It can still be broken down to phenylalanine, but such small amounts are used that it is not a concern for those with PKU1,4. The newest, sweetest alternative sweetener approved by the FDA in 2014 is advantame. It is heat-stable and does not have a trade name yet3. Notice it also has a similar structure to aspartame and neotame. Like Neotame it can broken down to phenylalanine, but such small amounts are used that it is not a concern for those with PKU. However, it has a much higher acceptable daily intake than Neotame4, meaning there is less concern about adverse effects from consuming too much.

Acesulfame-potassium (K) is not digested or absorbed, therefore it provides no energy or potassium to the body1. It is a heat-stable alternative sweetener.

Sucralose is structurally identical to sucrose except that 3 of the alcohol groups (OH) are replaced by chlorine molecules (Cl). This small change causes sucralose to not be digested and as such is excreted in feces1,4. It is a heat-stable alternative sweetener. Stevia is derived from a South American shrub, with the leaves being the sweet part. The components responsible for this sweet taste are a group of compounds known as steviol glycosides. The structure of steviol is shown below. 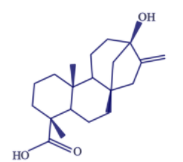 Web Link: What is natural and who decides?

Luo Han Guo (aka Siraitia grosvenrii Swingle, monk) fruit extracts are a newer, natural heat-stable alternative sweetener option derived from a native Chinese fruit. These extracts are sweet because of the mogrosides that they contain3. The structure of a mogroside is shown below.