Determining age at death is largely based upon dental eruption, dental calcification, dental wear, suture fusion, epiphyseal union of the postcranial bones, and degenerative changes (i.e. arthritis). Size and general appearance have little utility. In general, the older the individual at the time of death, the less accurate is the age estimate. Determining age requires comparison with tables of developmental norms. There can be considerable variation in the degree in which individuals vary from the average of development. Tables of norms should thus be regarded only as approximations.

Development of the dentition occurs at approximately 3-7 months in utero and continue until the late teens or early twenties. Radiographic examination of the dentition shows the development of the crown, root, and closure of the root, which can be used to determine age. For further reading on dental calcification see Moorrees et al. (1963), Age Variation of Formation Stages for Ten Permanent Teeth in the Journal of Dental Research, 42:1490-1502.

Eruption of the teeth into the mouth begins to occur around nine months of age. Each tooth has a general age of eruption, but this can vary from a few months to a few years as each child develops along a different trajectory. Ubelaker (1978) prepared a diagram for use in aging children going through dental eruption, this diagram is widely used in the discipline to estimate age at death. A quick table of eruption is listed below.

Dental wear or attrition occurs as the teeth erupt into the mouth. As an individual chews the topmost layer of tooth is ground off. As an individual ages, the amount of wear increases first through the enamel and then to the dentine. Individuals of advanced age or those eating course foods may wear the teeth to the point the crown is absent, and the root then becomes the masticatory surface. Due to the variability in the texture of foods eaten, dental wear may make an individual appear older or younger. For example, modern populations consuming extremely soft foods will show a much reduced dental wear. Other activities may also be responsible for tooth wear including bruxism and using the teeth as tools. Prehistoric tool use included working hides and doing light 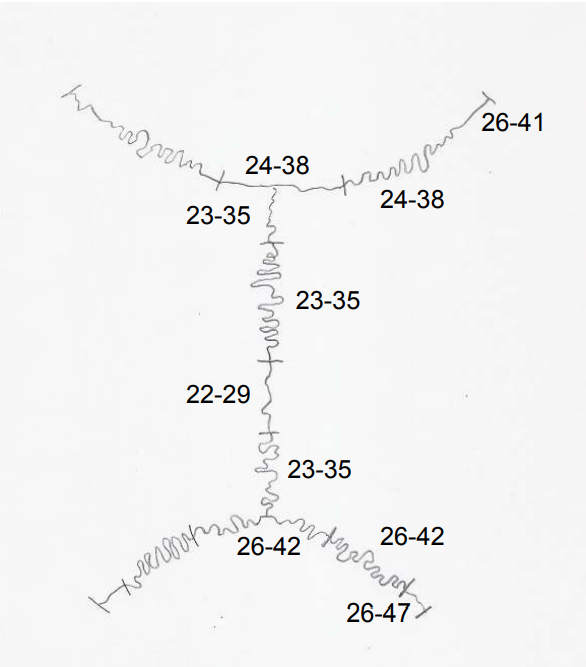 retouch on lithics, while today teeth may be used as tools to open packaging. Brothwell (1981) developed a general system for dental wear that is helpful in aging older individuals.

Once dental eruption is complete, aging of specimens becomes more difficult. Degenerative changes that are visually observable, including arthritis and dental wear, are two of the most effective methods which can be used to determine the age of an adult. Cranial suture closure may also be used, but in general will provide broad ranges into which a specimen will fall. Sutures should be recorded as unobservable, open (no evidence of closure), minimal closure (up to 50% closure observed), significant closure (mostly fused, but not complete), complete obliteration (totally fused) (Buikstra and Ubelaker 1994).

Degenerative Change in the Skull

A few degenerative changes exist that can be used in aging including biparietal thinning, alveolar resporption, and arthritis of the occipital condyles and mandibular fossae. Biparietal thinning begins on the external table of the lateral and posterior aspects of the parietals. The parietal bosses will appear flattened in nature (Mann and Hunt 2005). This is generally seen in individuals of advanced age, likely 50 years or older. Alveolar resporption is the product of tooth loss, decrease in bone density associated with age, and also periodontal disease. The alveoli shrink, and as teeth are shed the sockets fill in. The two areas where movement occur in the skull are the occipital condyles and mandibular fossae. At these articulation sites osteophytic lipping or erosion may be present, both of which suggest an age of 35 years of older. Lipping is represented by small ridges or spicules of bone within or around the margins of the surface. Erosion is

seen as pitting with irregular margins within the surface area, increase porosity will also be seen around and within the erosive area.