Homeostasis is maintained by the body’s responses to adverse stimuli, ensuring maintenance of an optimal physiological environment.

When an individual doesn’t have enough to eat, the body adjusts by slowing down metabolism so that he or she expends fewer calories. This adaptation conserves the limited energy available from the inadequate diet.

Homeostasis regulates an organism ‘s internal environment and maintains a stable, constant condition of properties like temperature and pH. Homeostasis can be influenced by either internal or external conditions and is maintained by many different mechanisms. All homeostatic control mechanisms have at least three interdependent components for the variable being regulated:

The sensors, integrating center, and effectors are the basic components of every homeostatic response. Positive and negative feedback are more complicated mechanisms that enable these three basic components to maintain homeostasis for more complex physiological processes.

Positive feedback is a mechanism in which an output is enhanced in order to maintain homeostasis. Positive feedback mechanisms are designed to accelerate or enhance the output created by a stimulus that has already been activated. Positive feedback mechanisms are designed to push levels out of normal ranges. To achieve this, a series of events initiates a cascading process that builds to increase the effect of the stimulus. This process can be beneficial but is rarely used because it may become uncontrollable. A positive feedback example is blood platelet accumulation and aggregation, which in turn causes blood clotting in response to an injury of the blood vessels.

Negative Feedback Loop: The hypothalamus secretes corticotropin-releasing hormone (CRH), which directs the anterior pituitary gland to secrete adrenocorticotropic hormone (ACTH). In turn, ACTH directs the adrenal cortex to secrete glucocorticoids, such as cortisol. Glucocorticoids not only perform their respective functions throughout the body but also prevent further stimulating secretions of both the hypothalamus and the pituitary gland

If body temperature is below the set point, muscles shiver to generate heat and the constriction of the blood vessels helps the body retain heat. This example is very complex because the hypothalamus can change the body’s temperature set point, such as raising it during a fever to help fight an infection. Both internal and external events can induce negative feedback mechanisms. 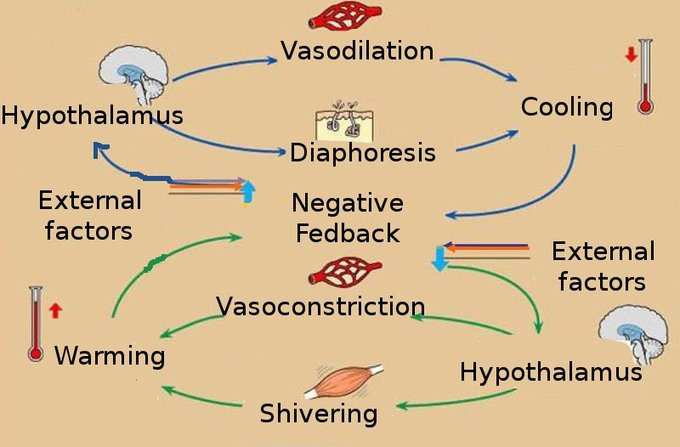