The outer, middle, and inner structures of the ear collect sound energy, converting it to audible sound.

In order to hear a sound, the auditory system must accomplish three basic tasks. First, it must deliver the acoustic stimulus to the receptors; second, it must convert the stimulus from pressure changes into electrical signals; and third, it must process these electrical signals so that they can efficiently indicate the qualities of the sound source, such as frequency (pitch), amplitude (loudness, volume), and location.

The human ear can be divided into three functional segments:

In mammals, sound waves are collected by the external, cartilaginous outer part of the ear called the pinna. They then travel through the auditory canal, causing vibration of the thin diaphragm called the tympanum, or ear drum, the innermost part of the outer ear. Interior to the tympanum is the middle ear, which holds three small bones called the ossicles (“little bones”), that transfer energy from the moving tympanum to the inner ear. The three ossicles are the malleus (also known as the hammer), the incus (the anvil), and stapes (the stirrup). The three ossicles are unique to mammals; each plays a role in hearing. The malleus attaches at three points to the interior surface of the tympanic membrane. The incus attaches the malleus to the stapes. In humans, the stapes is not long enough to reach the tympanum. If we did not have the malleus and the incus, then the vibrations of the tympanum would never reach the inner ear. These bones also function to collect force and amplify sounds. The ear ossicles are homologous to bones in a fish mouth; the bones that support gills in fish are thought to be adapted for use in the vertebrate ear over evolutionary time. Many animals (frogs, reptiles, and birds, for example) use the stapes of the middle ear to transmit vibrations to it. 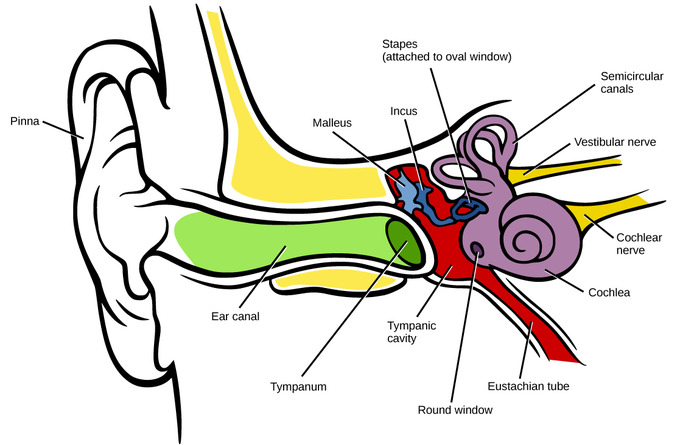 Human ear: Sound travels through the outer ear to the middle ear, which is bounded on its exterior by the tympanic membrane. The middle ear contains three bones called ossicles that transfer the sound wave to the oval window, the exterior boundary of the inner ear.