White blood cells (WBCs), or leukocytes, are immune system cells that defend the body against infectious disease and foreign materials. There are several different types of WBCs. They share commonalities but are distinct in form and function. WBCs are produced in the bone marrow by hemopoeitic stem cells, which differentiate into either lymphoid or myeloid progenitor cells. A major distinguishing feature is the presence of granules; white blood cells are often characterized as granulocytes or agranulocytes.

Granulocytes, also known as polymorphonuclear (PMN) leukocytes, are characterized by stained granules within their cytoplasm under a microscope. These granules are membrane-bound enzymes that act primarily in the digestion of endocytosed particles. They may also cause granule dependent cell-mediated apoptosis through the release of perforins, granzymes, and proteases. The nucleus contains multiple lobes (polymorphonuclear) as opposed to a single rounded lobe. Granulocytes contain toll-like receptors that allow them to recognize pathogen-associated molecular patterns (PAMPS). All categories except neutrophils contain IgE receptors that implicate them in allergic responses. There are four types of granulocytes:

Granulocytes: From left to right, a neutrophil, an eosinophil, and a basophil.

Mononuclear (MN) leukocytes are characterized by a single round nucleus within the cytoplasm. Some MN leukocytes contain granules while others do not, but the members of this group are sometimes considered agranulocytes by naming convention. MN leukocytes contain lysosomes, small vesicles containing digestive enzymes that break down foreign matter that is endocytosed by the cell during phagocytosis. The cells include: 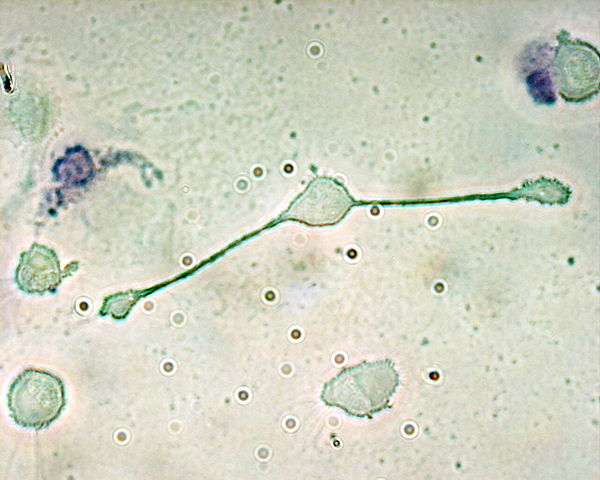