Lung compliance refers to the magnitude of change in lung volume as a result of the change in pulmonary pressure.

Low lung compliance can be the result of interstitial lung diseases resulting from the inhalation of particulate substances such as asbestos (asbestosis) and silicon (silicosis).

Compliance is the ability of lungs and pleural cavity to expand and contract based on changes in pressure. Lung compliance is defined as the volume change per unit of pressure change across the lung, and is an important indicator of lung health and function. Measurements of lung volumes differ at the same pressure between inhalation and exhalation, meaning that lung compliance differs between inhalation and exhalation. Lung compliance can either be measured as static or dynamic based on whether only volume and pressure (static) is measured or if their changes over time are measured as well (dynamic).

Compliance and Elastic Recoil of the Lung

A low lung compliance means that the lungs are “stiff” and have a higher than normal level of elastic recoil. A stiff lung would need a greater-than-average change in pleural pressure to change the volume of the lungs, and breathing becomes more difficult as a result. Low lung compliance is commonly seen in people with restrictive lung diseases, such as pulmonary fibrosis, in which scar tissue deposits in the lung making it much more difficult for the lungs to expand and deflate, and gas exchange is impaired. Pulmonary fibrosis is caused by many different types of inhalation exposures, such as silica dust. 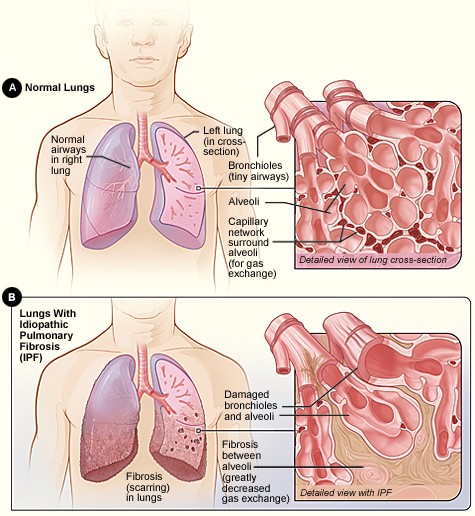 Pulmonary Fibrosis: Pulmonary fibrosis stiffens the lungs through deposits of scar tissue, decreasing low compliance and making it more difficult for the lungs to inflate and deflate.

A high lung compliance means that the lungs are too pliable and have a lower than normal level of elastic recoil. This indicates that little pressure difference in pleural pressure is needed to change the volume of the lungs. Exhalation of air also becomes much more difficult because the loss of elastic recoil reduces the passive ability of the lungs to deflate during exhalation. High lung compliance is commonly seen in those with obstructive diseases, such of emphysema, in which destruction of the elastic tissue of the lungs from cigarette smoke exposure causes a loss of elastic recoil of the lung. Those with emphysema have considerable difficulty with exhaling breaths and tend to take fast shallow breaths and tend to sit in a hunched-over position in order to make exhalation easier.