Airway resistance refers to resistance in the respiratory tract to airflow.

Size of the Airway

Resistance in an airway is inversely proportional to the radius of the airway. However the ratio for this relationship is not 1:1. Below is the equation for calculating airway resistance (R).

The most important part of this formula is radius of the airway (r). A common example is that if one were to double the diameter of an airway (thus doubling the radius as well) the resistance of the airway would drop by a factor of 16. This mathematical property between radius and resistance is consistent for all tubes, and is often applied to the blood vessels in the cardiovascular system.

Airway resistance can be indirectly measured with body plethysmography, which is an instrument used for measuring changes in volume within a structure, such as the airways. The resistance of the airways is an important indicator of lung health and function and can be used to diagnose lung diseases.

The size of the airways, and thus the resistance can change based on the health and conditions of the lungs. Most lung diseases increase airway resistance in many different ways. For example, in asthma attacks the bronchioles spasm and constrict, which increases resistance. Emphysema also increases airway resistance because the lung tissue becomes too pliable and it the airways become more difficult to hold open by the flow of air.

The air that flows through the lungs varies considerably in the properties of the flow of air. The air flow can either be turbulant, transitional or laminar based on the airway. Laminar flow involves an orderly and concentric distribution of layers of air particles and tends to occur in smaller airways, and has lower resistance. Turbulent flow is disorganized distribution of the layers of air and tends to occur in larger airways and places where the airways branch, and has a higher resistance. Transitional flow occurs in places that branch within smaller airways, in which the air flow becomes in between laminar and turbulent flow and has moderate resistance. The relationship between resistance and type of airflow is difficult to measure and apply, but some mathematical models (such as the Reynold’s number) can provide a rough estimate. 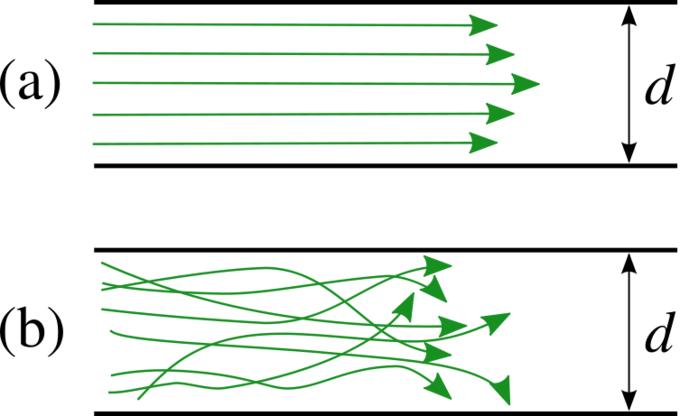