While the primary function of the lungs is gas exchange, they have several other functions, which are both metabolic and mechanical. These include the secretion of many enzymes and proteins involved in other body systems and nonrespiratory air movements.

The lungs secrete many enzymes and proteins that serve non-respiratory metabolic functions.

ACE (angiotensin converting enzyme) is an enzyme secreted by the endothelial cells of the capillaries in the lungs. ACE converts angiotensin I into angiotensin II, which are two important hormones in the renin-angiotensin feedback loop of the renal system. 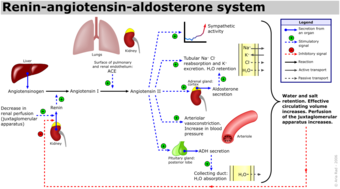 ACE inhibitors are a common treatment for those with hypertension, as it will reduce the amount of ACE, which will cause the kidney to excrete more water, which lowers blood volume and blood pressure.

The epithelial cells and macrophages of the lungs secrete many molecules that have immune system functions. In general these molecules have anti-microbial functions.

There are several types of non-respiratory air movements that have important functions that are not primarily related to gas exchange. One example is voice production for speaking and singing, which involves fine control over the direction and flow of the air as it passes into the upper respiratory tract.

Other mechanical functions include sneezing and coughing, which protect the lungs and airways from irritants that could potentially cause damage. Coughing is a result of constriction from nervous stimulation in the trachea and larynx and also serves to dislodge mucus trapped inside the lungs.