Digestion is necessary for absorbing nutrients from food and occurs through two processes: mechanical and chemical digestion.

The proper functioning of the gastrointestinal (GI) tract is imperative for our well being and life -long health. A non-functioning or poorly-functioning GI tract can be the source of many chronic health problems that can interfere with your quality of life.

Here is a look at the importance of two main functions of the digestive system: digestion and absorption.

The gastrointestinal tract is responsible for the breakdown and absorption of the various foods and liquids needed to sustain life. Many different organs have essential roles in the digestion of food, from the mechanical breakdown of food by the teeth to the creation of bile (an emulsifier) by the liver.

Bile production plays a important role in digestion: it is stored and concentrated in the gallbladder during fasting stages, and discharged to the small intestine. Pancreatic juices are excreted into the digestive system to break down complex molecules such as proteins and fats.

Absorption occurs in the small intestines, where nutrients directly enter the bloodstream.

Each component of the digestive system plays a special role in these complimentary processes. The structure of each component highlights the function of that particular organ, providing a seamless anatomy to keep our body fueled and healthy.

Components of the Digestive System

The alimentary canal is the long tube that runs from the mouth (where the food enters) to the anus (where indigestible waste leaves). The organs in the alimentary canal include the mouth (the site of mastication), the esophagus, the stomach, the small and large intestines, the rectum, and the anus. From mouth to anus, the average adult digestive tract is about thirty feet (30′) long.

In humans, proteins need to be broken down into amino acids, starches into sugars, and fats into fatty acids and glycerol. This mechanical and chemical breakdown encompasses the process of digestion.

To recap these twin processes:

Moistening and Breakdown of Food

Digestion begins in the mouth. A brain reflex triggers the flow of saliva when we see or even think about food. Enzymes in saliva then begin the chemical breakdown of food; teeth aid in the mechanical breakdown of larger food particles.

Saliva moistens the food, while the teeth masticate the food and make it easier to swallow. To accomplish this moistening goal, the salivary glands produce an estimated three liters of saliva per day.

Amylase, the digestive enzyme found in saliva, starts to break down starch into simple sugars before the food even leaves the mouth. The nervous pathway involved in salivary excretion requires stimulation of receptors in the mouth, sensory impulses to the brain stem, and parasympathetic impulses to salivary glands. Once food is moistened and rolled and ready to swallow, it is known as a bolus.

Swallowing and the Movement of Food

For swallowing to happen correctly a combination of 25 muscles must all work together at the same time. Swallowing occurs when the muscles in your tongue and mouth move the bolus into your pharynx.

The pharynx, which is the passageway for food and air, is about five inches (5″) long—a remarkably small space. A small flap of skin called the epiglottis closes over the pharynx to prevent food from entering the trachea, which would cause choking. Instead, food is pushed into the muscular tube called the esophagus. Waves of muscle movement, called peristalsis, move the bolus down to the stomach.

While in the digestive tract, the food is really passing through the body rather than being in the body. The smooth muscles of the tubular digestive organs move the food efficiently along as it is broken down into easily absorbed ions and molecules.

Large-scale Breakdown in the Stomach

Once the bolus reaches the stomach, gastric juices mix with the partially digested food and continue the breakdown process. The bolus is converted into a slimy material called chyme. 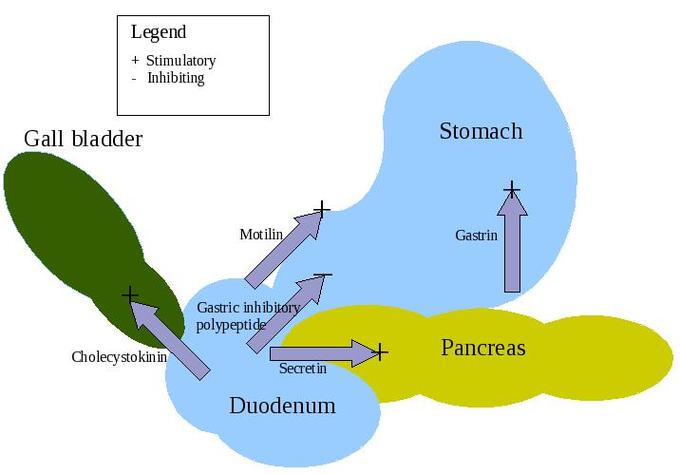 The stomach is a muscular bag that maneuvers food particles, mixing highly acidic gastric juice and powerful digestive enzymes with the chyme to prepare for nutrient absorption in the small intestine. Stimulatory hormones such as gastrin and motilin help the stomach pump gastric juice and move chyme. The complex network of hormones eventually prepares chyme for entry into the duodenum, the first segment of the small intestine.

Absorption in the Small Intestine

During absorption, the nutrients that come from food (such as proteins, fats, carbohydrates, vitamins, and minerals) pass through the wall of the small intestine and into the bloodstream. In this way nutrients can be distributed throughout the rest of the body. The small intestine increases surface area for absorption through tiny interior projections, like small fingers, called villi.

Waste Compaction in the Large Intestine

In the large intestine there is resorption of water and absorption of certain minerals as feces are formed. Feces are the waste parts of the food that the body passes out through the anus.