The muscularis is responsible for the segmental contractions and peristaltic movements in the gastrointestinal (GI) tract.

The gastrointestinal (GI) tract is composed of four layers of tissue, known as tunics. Each layer has different structures and functions. From the inside out they are called the mucosa, submucosa, muscularis externa, and serosa.

Structure of the Muscularis Externa 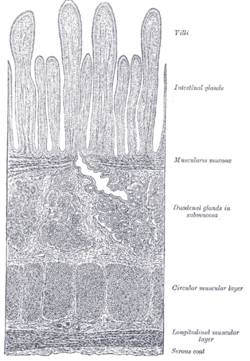 The coordinated contractions of these layers is called peristalsis. Between the two muscle layers is the myenteric or Auerbach’s plexus, which controls peristalsis. Peristaltic activity is regulated by these nerve cells, and the rate of peristalsis can be modulated by the rest of the autonomic nervous system.

The thickness of muscularis externa varies in each part of the tract. In the colon, for example, the muscularis externa is much thicker because the feces are large and heavy, and require more force to push along. The outer longitudinal layer of the colon thins out into three discontinuous longitudinal bands known as tiniae coli (bands of the colon). This is one of the three features helping to distinguish between the large and small intestine.

Occasionally in the large intestine (two to three times a day), there will be mass contraction of certain segments, moving a lot of feces along. This is generally when one gets the urge to defecate.