The pancreas lies in the epigastrium or upper central region of the abdomen and can vary in shape.

Pancreatic tissue is present in all vertebrate species, but its precise form and arrangement varies widely. There may be up to three separate pancreases, two of which arise from ventral buds, and the other dorsally. In most species (including humans), these fuse in the adult, but there are several exceptions.

Even when a single pancreas is present, two or three pancreatic ducts may persist, each draining separately into the duodenum (or an equivalent part of the foregut). Birds, for example, typically have three such ducts.

In teleosts, and a few other species (such as rabbits), there is no discrete pancreas at all, with pancreatic tissue being distributed diffusely across the mesentery and even within other nearby organs, such as the liver or spleen.

Anatomy of the Pancreas

The pancreas lies in the epigastrium or upper central region of the abdomen. It is composed of several parts. 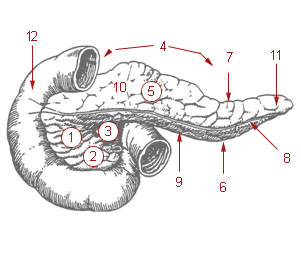