In human males, the penis serves as both a reproductive organ and as a urinal duct.

The penis is an intromittent organ of male animals with reproductive and urinary functions. Unlike many other species, the human penis has no baculum, or erectile bone. Instead, it relies entirely on engorgement with blood to achieve erection. The human penis cannot be withdrawn into the groin, and
is larger than that of any other primate, particularly in regards to proportion to body mass.

Human Penis: This is a diagram of a human penis with its parts labeled.

Parts of the Penis

The human penis is made up of three columns of tissue: two corpora cavernosa that lie next to each other on the dorsal side and a corpus spongiosum that lies between the corpora cavernosa on the ventral side. The glans penis is the bulbous end of the penis formed by the corpus spongiosum. It supports the foreskin (prepuce) that retracts to expose the glans. The area on the underside of the penis, where the foreskin is attached, is called the frenum (or frenulum). The rounded base of the glans is called the corona. The perineal raphe is the noticeable line along the underside of the penis.

The urethra is the last part of the urinary tract and traverses the corpus spongiosum. The urethral opening is called the meatus and lies on the tip of the glans penis. It serves as a passage both for urine and semen. Sperm are produced in the testes and stored in the attached epididymis. Sperm are propelled through the vas deferens during ejaculation. Fluids are added by the seminal vesicles before the vas deferens carries the sperm to the ejaculatory ducts, which join the urethra inside the prostate gland. The prostate as well as the bulbourethral glands add further secretions, then the semen is expelled through the penis. The raphe is the noticeable ridge between the halves of the penis. It is located on the ventral aspect of the penis and runs from the meatus and across the scrotum to the perineum (area between scrotum and anus).

Homology to the Clitoris 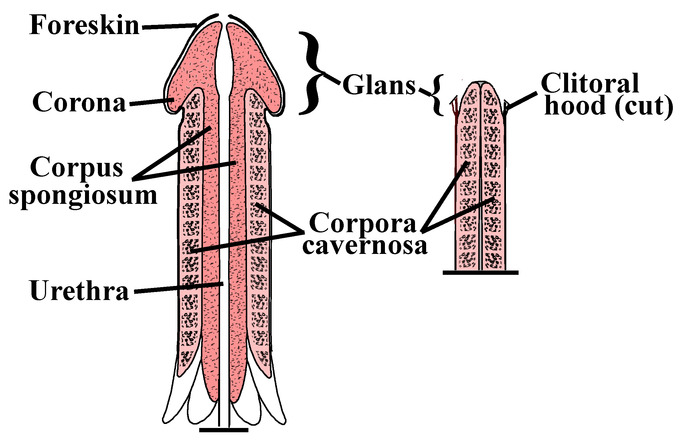 Penile and Clitoral Structure: This diagram compares the structure of the penis to the clitoris.

The Penis As a Sexual Organ

An erection is the stiffening and rising of the penis that facilitates sexual arousal, though it can also happen in nonsexual situations. The primary physiological mechanism that brings about an erection is the autonomic dilation of arteries supplying blood to the penis. This allows more blood to fill the three spongy erectile tissue chambers in the penis, causing it to lengthen and stiffen.

The engorged erectile tissue presses against and constricts the veins that carry blood away from the penis. More blood enters than leaves the penis until an equilibrium is reached where an equal volume of blood flows into the dilated arteries and out of the constricted veins; a constant erectile size is achieved at this equilibrium. Although many erect penises point upwards, it is common and normal for the erect penis to point nearly vertically upwards, nearly vertically downwards, or even horizontally forward, depending on the tension of the suspensory ligament that holds it in position.

Ejaculation is the ejection of semen from the penis and is usually accompanied by orgasm. A series of muscular contractions delivers semen, containing sperm cells or spermatozoa, from the penis. It is usually the result of sexual stimulation, including prostate stimulation. Ejaculation may occur spontaneously during sleep (known as a nocturnal emission or “wet dream”).