Women undergo many physical changes during pregnancy due to hormonal fluctuations and the need to accommodate a growing fetus.

Pregnancy begins when the developing embryo implants in the endometrial lining of a woman’s uterus. Most pregnant women do not have any specific signs or symptoms after implantation, although it is not uncommon to experience minimal bleeding.

After implantation, the uterine endometrium is called the decidua. The placenta, which is partly formed from the decidua and partly from outer layers of the embryo, connects the developing embryo to the uterine wall to allow nutrient uptake, waste elimination, and gas exchange via the mother’s blood supply.

The umbilical cord connects the embryo or fetus to the placenta. The developing embryo undergoes tremendous growth and changes during the process of fetal development.

Most pregnant women experience a number of symptoms that can signify pregnancy. The symptoms include nausea and vomiting, excessive tiredness and fatigue, cravings for certain foods that are not normally sought out, and frequent urination, particularly during the night.

A number of early medical signs are associated with pregnancy. These signs typically appear, if at all, within the first few weeks after conception. Not all of these signs are universally present, nor are all of them diagnostic by themselves; taken together, however, they may make a presumptive diagnosis of pregnancy.

Breast tenderness is common during the first trimester. Shortly after conception, the nipples and areolas begin to darken due to a temporary increase in hormones. This process continues throughout the pregnancy.

Despite all the signs, some women may not realize they are pregnant until they are far along in pregnancy. In some cases, a few have not been aware of their pregnancy until they begin labor. This can be caused by many factors, including irregular periods (quite common in teenagers), certain medications (not related to conceiving children), and obese women who disregard the pregnancy-related weight gain. Others may be in denial of their situation.

The first 12 weeks of pregnancy are known as the first trimester. During this trimester, fetal development can be divided into different stages.

Weeks 13 to 28 of the pregnancy are called the second trimester. Most women feel more energized in this period. They put on weight as the symptoms of morning sickness subside and eventually fade away.

By the end of the second trimester, the expanding uterus has created a visible baby bump. Although the breasts have been developing internally since the beginning of the pregnancy, most of the visible changes appear after this point.

The uterus can expand up to 20 times its normal size during pregnancy. Although the fetus begins to move and takes a recognizable human shape during the first trimester, it is not until the second trimester that movement of the fetus, often referred to as quickening, can be felt by the woman.

Final weight gain takes place during the third trimester, and it is the most weight gain throughout the pregnancy. The fetus will be growing most rapidly during this stage, gaining up to 28g per day. 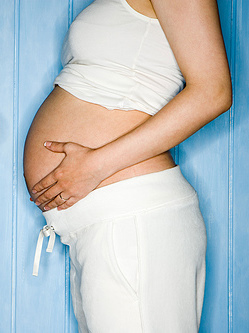 The woman’s abdomen will transform in shape as the abdomen drops due to the fetus turning in a downward position ready for birth, and the woman will be able to lift her belly up and down. The woman’s navel will sometimes become convex—popping out—due to her expanding abdomen. This period of her pregnancy can be uncomfortable and cause symptoms like weak bladder control and backache.

The body’s posture changes as the pregnancy progresses. The pelvis tilts and the back arches to help keep balance. Poor posture occurs naturally from the stretching of the woman’s abdominal muscles as the fetus grows. These muscles are less able to contract and keep the lower back in proper alignment.

The pregnant woman has a different gait. The step lengthens as the pregnancy progresses due to weight gain and changes in posture. In addition, the increased body weight of pregnancy, fluid retention, and weight gain lowers the arches of the foot, further adding to the foot’s length and width.

The influences of increased hormones such as estrogen and relaxin initiate the remodeling of soft tissues, cartilage, and ligaments. Certain skeletal joints (e.g., the pubic symphysis and sacroiliac) widen or have increased laxity.