The yolk sac is vascularized and contributes nutrients to the embryo.

The yolk sac is the first element seen in the gestational sac during pregnancy. In humans, it is usually visible at five weeks of gestation. Identifying a true gestation sac is a critical landmark, and is reliably seen in early pregnancy through ultrasound. The yolk sac, situated on the ventral aspect of the embryo, is lined by extra-embryonic endoderm, outside of which is a layer of extra-embryonic mesenchyme derived from the mesoderm. 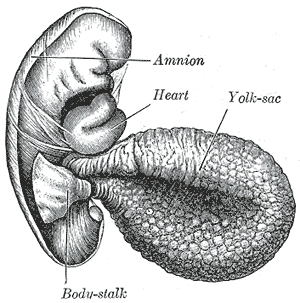 Yolk sac: The yolk sac is a membranous sac attached to the embryo that provides nourishment in the form of yolk.

At the end of the fourth week, the yolk sac has the appearance of a small, pear-shaped vesicle (umbilical vesicle) opening into the digestive tube by a long, narrow tube, the vitelline duct. The vesicle can be seen in the afterbirth as a small, somewhat oval-shaped body whose diameter varies from 1 mm to 5 mm. It is situated between the amnion and the chorion and may lie on or at a varying distance from the placenta.

As a rule, the vitelline duct undergoes complete obliteration during the seventh week. In about 2% of the cases, its proximal portion persists as a diverticulum from the small intestine (Meckel’s diverticulum), which is situated about 60 cm proximal to the ileocecal valve. It may be attached by a fibrous cord to the abdominal wall at the umbilicus. Sometimes, a narrowing of the lumen of the ileum is seen opposite the site of attachment of the duct.

The yolk sac starts forming during the second week of embryonic development, at the same time of the shaping of the amniotic sac. The hypoblast starts proliferating laterally and descending. In the meantime Heuser’s membrane, located on the opposite pole of the developing vesicle, starts its upward proliferation and meets the hypoblast.