The sinusoids are capillaries that develop after implantation to allow the exchange of gas and nutrients with the mother.

The vitelline veins drain blood from the yolk sac. At first, they run upward in front on either side of the intestinal canal and, subsequently, unite on the ventral aspect of the canal. Beyond this, they are connected to one another by two anastomotic branches, one on the dorsal and the other on the ventral aspect of the duodenal portion of the intestine.

Thus, it is encircled by two venous rings. The superior mesenteric vein opens into the middle or dorsal anastomosis. The portions of the veins above the upper ring become interrupted by the developing liver and broken up by it into a plexus of small, capillary-like vessels termed sinusoids. 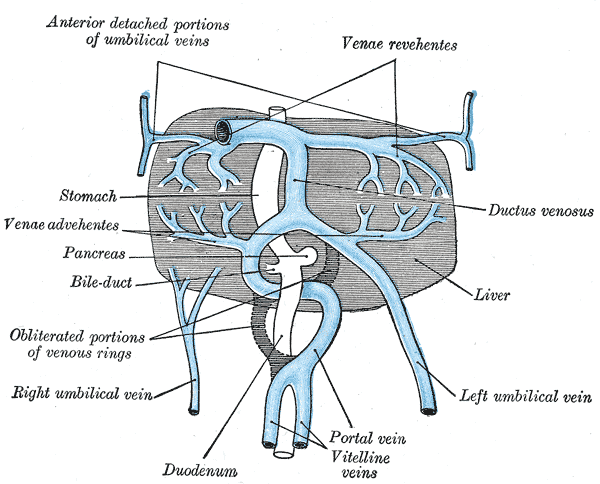 Vitelline veins: The liver and veins of a human embryo, 24 or 25 days old, as seen from the ventral surface. (The vitelline veins are visible at the center bottom.)

A sinusoid is a small blood vessel that is a type of capillary similar to a fenestrated endothelium. Sinusoids are actually classified as a type of open pore capillary (that is, discontinuous) as opposed to fenestrated.

Fenestrated capillaries have diaphragms that cover the pores, whereas open pore capillaries lack a diaphragm, having just an open pore. The open pore endothelial cells greatly increase their permeability.

Permeability is also increased by large intercellular clefts and fewer tight junctions. The level of permeability can allow small and medium-sized proteins, such as albumin, to readily enter and leave the blood stream.

Sinusoids are found in the liver, lymphoid tissue, endocrine organs, and hematopoietic organs, such as the bone marrow and the spleen. Sinusoids found within the terminal villi of the placenta are not comparable to these because they possess a continuous endothelium and complete basal lamina.

The invasion of endometrial sinusoids by the trophoblast allows maternal blood flow into the trophoblastic lacunae; this forms the uteroplacental blood circulation.